» The world- Including Sri Lanka started to feel the pinch of the Russia- Ukraine war
by reyaz Today at 12:12 am

» RAL UNTOLD STORY, KEEPING TOUCH
by blindhog Yesterday at 11:29 am 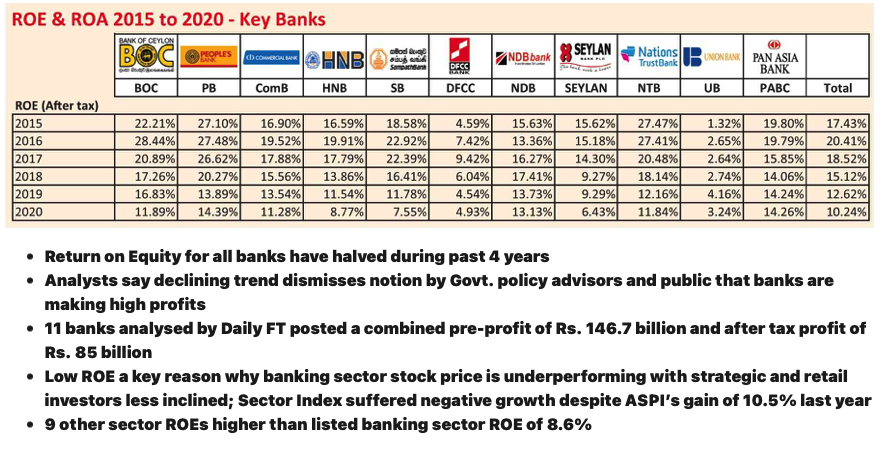 The banking sector›s Return on Equity (ROE) has been diminishing over the past years, proving wrong the misperception that the industry is making hefty profits.

An analysis by the Daily FT of leading State and private sector banks reveals that ROE in 2020 was just 10.24% and has halved in comparison to 2016 when it was 20.41%. Since 2016, the ROE has been on the decline overall for the sample of banks analysed.

The five-year analysis also proves that the low figure in 2020 is not unique given the COVID-19 pandemic and the banking sector being directed to provide extraordinary support to businesses and individuals via debt moratorium, concessionary working capital etc.

DFCC and Union Bank have had to contend with single digit ROEs during the period under review. NDB and the smaller Pan Asia Bank have managed their ROA better whilst Nations Trust Bank has seen its ROE more than halve between 2016 and 2020.

Analysts said that the low ROE is one of the key reasons why strategic investors, shareholders and new stock market investors are not bullish about banking sector stocks.

“The standard norm is on average a ROE of 12.5% in a low interest regime like 7.5% at present. Such an achievement enables a business to be termed as performing well and attractive. This norm ensures an investor makes his money within eight years. All private sector banks except two have a ROE of below this threshold,” analysts opined.

It was also pointed out that the low ROEs is the reason why banks share prices are low and underperforming. Despite the CSE achieving a 10.5% gain in 2020, its banking, finance and insurance Index managed only an increase of mere 1.5% and in terms of movements in GICS, banking sector contracted by 0.63%. The Bank sector was the third in terms of market capitalisation as at end-2020 and had dipped to fourth place in January.

The listed banking sector ROE of 8.6% figures poorly vis-a-vis 56% of transportation sector, 18% of materials, 15% of automobiles and components, 14% of utilities, 13% of insurance, 11-12% of telecommunication services, food, beverage and tobacco, household and personal products and commercial and professional services.

By the notion that banks make hefty profits, Governments and policy advisors target these institutions for heavy taxation or additional levies to boost State coffers. Though last year the 7% development levy was removed, banks are the most taxed after the sin industries such as liquor, tobacco and casinos.

Of the nine private sector banks surveyed, only DFCC, NDB, NTB and Pan Asia improved their profits in 2020.

The 11 banks analysed by the Daily FT reveal that the combined profit before all taxes was Rs. 146.7 billion and after tax profit was 42% below at Rs. 85 billion. Taxes were worth Rs. 27.7 billion as VAT on financial services and Rs. 33.8 billion as income tax.

Fitch said last week it expects large banks’ profitability to weaken in the near to medium term, stemming mostly from higher credit costs, but still remain structurally profitable. Banks’ profitability metrics are also likely to come under pressure from lower margins, given the low interest rate environment and muted loan growth in prior years.

“The large banks’ profitability metrics are broadly comparable and have been supported by their established franchises,” Fitch added in a publication of peer review of top rated Sri Lankan banks. 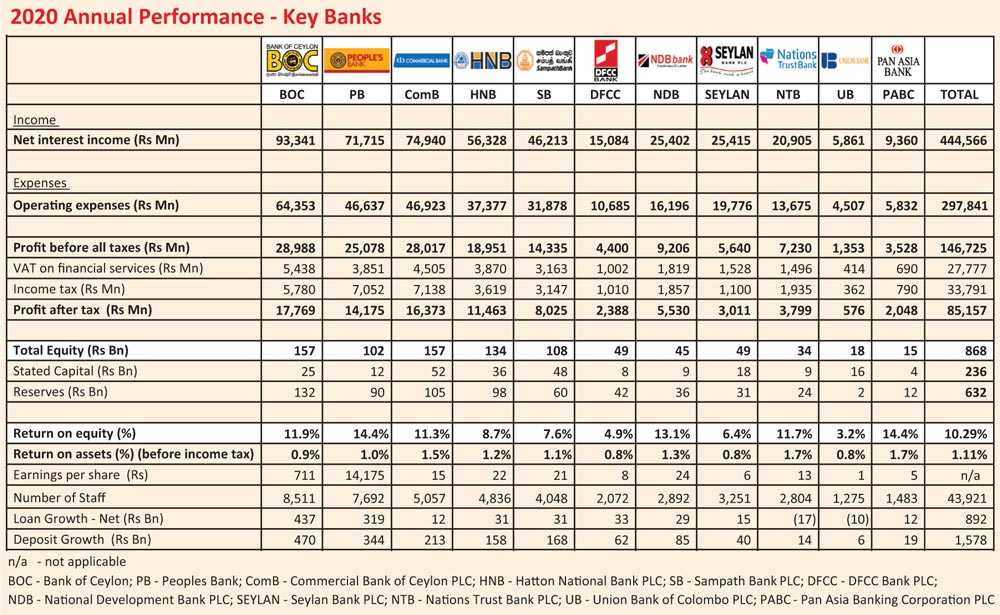