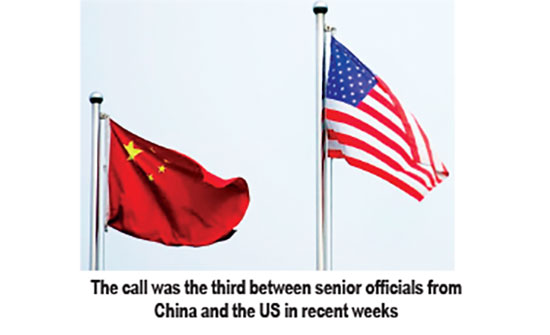 The Chinese and US commerce ministers agreed to push forward trade and investment links in their first call since the start of the Joe Biden administration.
Chinese Commerce Minister Wang Wentao and his counterpart Gina Raimondo “agreed to promote the healthy development of pragmatic cooperation in trade and investment”, in a phone call yesterday. The two “exchanged views frankly and pragmatically on relevant issues and mutual concerns”, according to a Chinese government statement.
The two nations are slowly resuming official contact after the January change of administration in the United States. Some parts of US policy towards China are becoming clearer, but it’s still not publicly clear what the US plans to do with the ‘Phase One’ trade deal signed last year or tariffs on Chinese goods.
The call was the third between senior officials in recent weeks, after Vice-Premier Liu He spoke with US Trade Representative Katherine Tai and Treasury Secretary Janet Yellen. The US Commerce Department did not respond to a request for more details on the call.
Stocks rose across Asian markets and the region’s currencies posted modest gains versus the dollar after the news. The CSI 300 Index gained about 1.1 per cent in the morning trading session.
China last week stated that normal communications between the two countries have started, according to Commerce Ministry Spokesman Gao Feng. The two sides have agreed to pragmatically solve some issues for producers and consumers, and promote healthy, stable economic and trade ties, he said.
However, US statements on the relationship with China aren’t so positive.
The trade relationship with China has “significant imbalance” and the Biden administration is committed to levelling it, Ms Tai said on the weekend before a meeting of Asia-Pacific trade ministers. There are parts of the United States-China relationship “that are unhealthy and have over time been damaging in some very important ways to the US economy”, she said.
“I won’t get overly excited” about the call, said Alvin Tan, head of Asia currency strategy at RBC Capital Markets LLC. “It’s positive in the sense that both countries are stepping up” economic and trade communication, but no game-changing decisions or announcements have come out, he said.
Ms Tai will talk with her Taiwanese counterpart soon, the Wall Street Journal reported earlier. The two sides will soon discuss “some kind of framework agreement,” Secretary of State Anthony Blinken said earlier this week.
However, China opposes any official contact between the US and Taiwan, which it regards as part of its territory, and any negotiations or discussions will inevitably be linked with US-China relations, and could increase the tensions between the two.
– Beijing (Bloomberg)

Re: Stocks rose across Asian Markets after China & US agree to push forward trade, investment ties

Re: Stocks rose across Asian Markets after China & US agree to push forward trade, investment ties

» Asian markets round-up: Most bourses trade higher on hopes of more China stimulus
» CHINA on total recovery path.global markets up.This is the time if we are to push to 8000. but who will lead the push?
» Growing China Ties Let Sri Lanka Rebuff U.S. War Inquiry Push
» China positive on trade and investment
» Stocks hammered in Wall Street and Asian Markets over FED dec