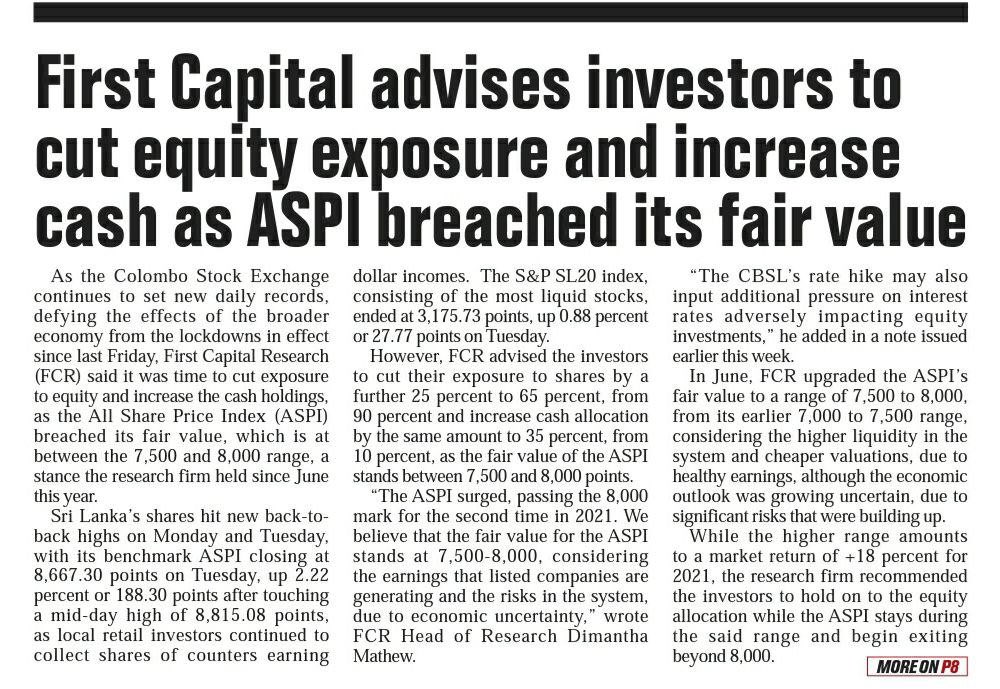 As the Colombo Stock Exchange continues to set new daily records, defying the effects of the broader economy from the lockdowns in effect since last Friday, First Capital Research (FCR) said it was time to cut exposure to equity and increase the cash holdings, as the All Share Price Index (ASPI) breached its fair value, which is at between the 7,500 and 8,000 range, a stance the research firm held since June this year.

Sri Lanka’s shares hit new back-to-back highs on Monday and Tuesday, with its benchmark ASPI closing at 8,667.30 points on Tuesday, up 2.22 percent or 188.30 points after touching a mid-day high of 8,815.08 points, as local retail investors continued to collect shares of counters earning dollar incomes.  The S&P SL20 index, consisting of the most liquid stocks, ended at 3,175.73 points, up 0.88 percent or 27.77 points on Tuesday. 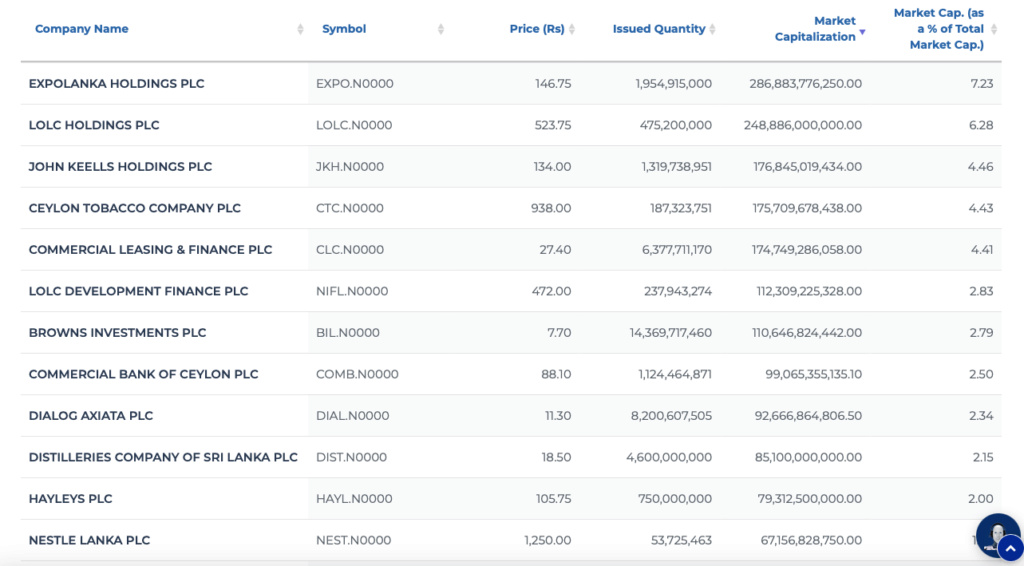 However, FCR advised the investors to cut their exposure to shares by a further 25 percent to 65 percent, from 90 percent and increase cash allocation by the same amount to 35 percent, from 10 percent, as the fair value of the ASPI stands between 7,500 and 8,000 points.

“The ASPI surged, passing the 8,000 mark for the second time in 2021. We believe that the fair value for the ASPI stands at 7,500-8,000, considering the earnings that listed companies are generating and the risks in the system, due to economic uncertainty,” wrote FCR Head of Research Dimantha Mathew.

In June, FCR upgraded the ASPI’s fair value to a range of 7,500 to 8,000, from its earlier 7,000 to 7,500 range, considering the higher liquidity in the system and cheaper valuations, due to healthy earnings, although the economic outlook was growing uncertain, due to significant risks that were building up.

While the higher range amounts to a market return of +18 percent for 2021, the research firm recommended the investors to hold on to the equity allocation while the ASPI stays during the said range and begin exiting beyond 8,000.

As the market remains expensive now with the ASPI above 8,000, in one option offered to equity investors, FCR advised to gradually start reducing the exposure from an ASPI level of 8,200, as there were a number of illiquid counters, which had driven the market.

“But remember to reduce exposure to 65 percent and continue to reduce further, as the market climbs to higher levels, which may provide the investor an opportunity to buy, if the market goes through a correction,” Mathew wrote.

In the second option, First Capital asked to switch the portfolio into more defensive and high dividend yielding counters, if the desire is to hold on to the exposure.

“If you are an investor who would want to continue your exposure, then the ideal way to protect your capital would be to move into value counters such as banking and dollar income companies (Eg: TJL, HAYL, EXPO, HAYC, WIND, LVEF) while high dividend yielding companies mostly in the food, beverage and tobacco sector and material sector are preferred (Eg: CTC, NEST, LLUB),” he said.

“The life insurance sector could also be highlighted, as the sector benefits from rising interest rates,” he added.
Earlier this week, Mathew said the current bull run, similar to the one in January, could continue till the ASPI reaches the 9,000 level, before settling around 7,500 levels.