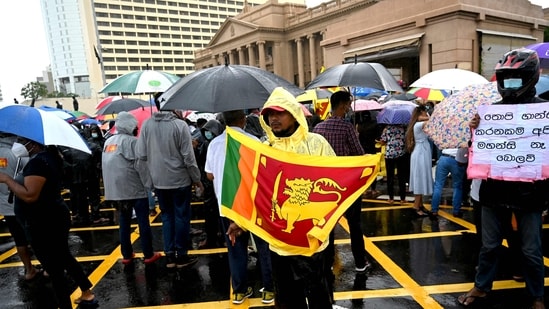 Sri Lanka finance minister Ali Sabry on Wednesday waved a metaphorical red flag in parliament as the troubled nation's usable foreign exchange reserves dropped below $50 million, increasing worry over its ability to provide food, fuel and other essential goods for citizens, and repay massive foreign debts. Sabry - who quit April 4, a day after being appointed, only to return - warned 'we have been over-spending two and a half times'. "In 2021 total income was 1,500 billion (Sri Lankan) rupees… expenditure was 3,522 billion rupees… we were living (beyond) our means…" he said, cautioning lawmakers that aid from the World Bank or the IMF would not solve deep-rooted problems.

"The IMF is not Aladdin's magic lamp," he said.
Sri Lanka is on the brink of bankruptcy and has suspended payments on foreign loans, which total over $50 billion with an estimated $8.6 billion due this year.

Foreign exchange reserves were an estimated $2.31 billion in February. By March it had dropped to $1.93 billion.

Overall reserves have crashed by 70 per cent in two years, Reuters reported.

The World Bank said it would release $400 million 'shortly'. This is well below the $3-$4 billion estimated in bridge financing to meet key expenses.
The Sri Lankan government has sent out a general SOS, to which India has responded generously. China - a major creditor - is also in talks to give aid.
Sabry has hailed India for its support during talks with the IMF.

Addressing the Lankan parliament today, Sabry - who led those talks - said he met Nirmala Sitharaman and that she had offered her government's support.
Sitharaman last month said India would 'try to extend all possible cooperation' to Sri Lanka to help it emerge from this crisis. The Indian government also spoke to the IMF on behalf of Sri Lanka and the global financial body's chief, Kristalina Georgieva, later said she appreciated India's assistance.

ndia has committed over $3 billion in loans, credit lines and swaps since January. And on Monday it extended a further $200 million - over and above two earlier tranches of $500 million - of fuel. Sri Lanka today also sought fertilisers, as well as deferral of a $2.5 billion to the Asian Clearing Union.

The crisis has triggered a shortage of essential goods - food, fuel, and medicines - and skyrocketing prices for what little remains on shelves.

Sabry's comments come a day after the main opposition party introduced a no-confidence motion against Rajapaksa for mishandling the country's economy.