» SGH buys EXPO from retailers
by Chula Yesterday at 11:49 pm

» What you need to remember is there is ALWAYS a way to make income from day trading stocks. Stock market for beginners and day traders
by Asoka Samarakone Yesterday at 9:00 pm

» LPRT and CHOT old and profitable businesses, yet severely undervalued
by deli Yesterday at 5:13 pm

Posts : 657
Equity Stars : 5334
Reputation : 21
Join date : 2011-01-20
Bounce,” the term used when describing markets for Rubber was well applied and evident at the Colombo Auctions held last Thursday and on Tuesday when unprecedented prices were realized both for Sheet Rubber Grade RSS1 and Latex Crepe Grade 1X.

At the sale held at the Ceylon Chamber of Commerce last Thursday, a parcel of RSS1 weighing 3,916 kilos manufactured by Mahayaya Estate, Pasyala and managed by Kurunegala Plantations Ltd., coming under the purview of The Coconut Development Ministry and Janatha Estates Development Board fetched Rs. 638/25 Per kg. which is the highest price ever recorded for RSS1 at the Colombo Auctions.

The “bounce” continued at Tuesday’s sale as well, when a parcel of Latex Crepe 1X weighing 2, 000 kgs. produced by Deviturai Estate, Ethkandura and managed by Elpitiya Plantations Ltd. coming under the purview of the Aitken Spence Group of Companies fetched an all time high price of Rs. 700 per kg.

The record prices for both parcels were paid by M/s. Rajapakse Trading (Pvt) Ltd. The selling broker in both instances was M/S. J D & Sons (Pvt.) Ltd.

“La Nin Ya” has been wreaking havoc on the global weather patterns during the past couple of months, adversely affecting all major agriculture and plantation crops including rubber.

This, coupled with the insatiable demand by the tyre industries in China and India have seen natural rubber (NR) prices increase to unprecedented levels, double to that which existed during the corresponding period last year.

Thailand, the world’s largest NR producer has been one of the worst affected, having had lost a considerable hectarage due to incessant rains and floods.

At present most rubber growing countries in Asia including Sri Lanka are in “wintering,” which is the lean period where the trees are rested. Production in Thailand is said to drop by as much as around 60% during this period, thereby further aggravating an already critical short supply situation.

Predictions are that rubber prices would remain bullish for the better part of the year and begin to stabilize somewhat thereafter. 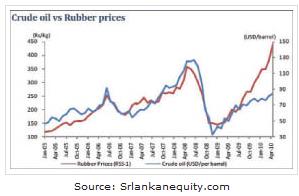 » Rubber Price, import and export rubber related products
» It is time to target combined higher forward earnings and higher momentum companies!
» ER Shows Signs Of Settling Down But Rates To Go Higher, Higher
» Rubber Price or Rubber Production
» HIGHER THE RISK HIGHER WIIL BE THE RETURN & LOWER THE RISK LOWER WILL BE THE RETURN