Posts : 6053
Equity Stars : 15437
Reputation : 770
Join date : 2012-02-14
Needs to pay $ 4.9 b to China for total loan of $ 2.96 b
China, ADB leading lenders, Western loans low
Govt. has borrowed $ 5 b through five euro bonds
Reuters: Sri Lanka will have to repay more than $ 15 billion to foreign lenders such as China and the Asian Development Bank (ADB) from which it has borrowed over the past 15 years, a document submitted to Parliament showed on Thursday.

The country owes China a total of $ 4.9 billion including interest payments in respect of loans worth $ 2.96 billion obtained since 1997, while it must repay $ 4.64 billion to the ADB after borrowing $ 3.35 billion over the same period.

The Chinese loans have an average debt repayment period of 12.2 years, while the ADB loan average is for 21 years, data showed.

The document was presented by International Monetary Cooperation Minister Sarath Amunugama in response to a question from an opposition legislator. 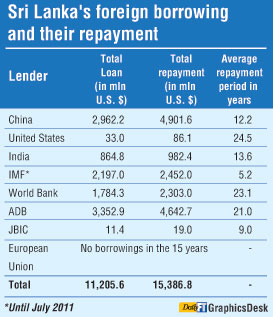 It is not immediately clear if the Government has already started to repay these loans.

Sri Lanka’s economic output was $ 59 billion last year. The country relies increasingly on China and Chinese companies for financing and expertise needed for more than $ 6 billion worth of infrastructure investments it has undertaken since the end of a three-decade civil war in May 2009.

Opposition parties and economists have raised concerns about the cost of loans from China, but the
Government has said cheaper funding has become difficult to secure as Sri Lanka is no longer ranked as “lower income” by the World Bank.

The Government of President Mahinda Rajapaksa, who is also Finance Minister, has borrowed to invest in the country’s long-neglected infrastructure, selling five sovereign bonds since 2007 on international markets. The bond sales raised $ 4 billion to finance such projects and to retire costly short-term debt.
SL owes…

Loans from Western countries including the United Stated have been low in the past 15 years, the data showed. Sri Lanka has rejected calls from them for an independent probe of human rights abuses during the final phase of its civil war.
http://www.ft.lk/2012/07/21/sl-owes-15-b-on-foreign-borrowings-since-1997/