» THE NEXT OPPORTUNITY - GET IN
by sureshot Today at 1:02 pm

Lake House Printers & Publishers (LPRT) is worth Rs 250/= per share?

Lake House Printers & Publishers (LPRT) is worth Rs 250/= per share?

Lake House Printer and Publishers (LPRT) own a freehold land at WAD Ramanayake Mawatha, which valued only at Rs 12mn in the Balance Sheet of the Company. Please see below the note given in the 2009/2010 Annual Report.

Page 27 - Annual Report 2009/2010
The freehold land and buildings of the Company situated at No.41,W.A.D.Ramanayake Mawatha,Colombo were revalued as at 10 April 2008 by an Independent Qualified Valuer at Rs.360,060,000 and Rs.33,340,000 respectively. However the revalued amounts have not been incorporated in to the financial statements.

Few property development companies have shown considerable interest in the land owned by the Lake House Printers and Publishers (LPRT) to enter into a joint venture agreement to develop the property into large scale commercial project. Current Market Value of the property expected to be in the range of Rs 600mn.

Ownership
More than 93% of the shares are held bt the Top 20 shareholder which include majority of the Wijewardena Family. 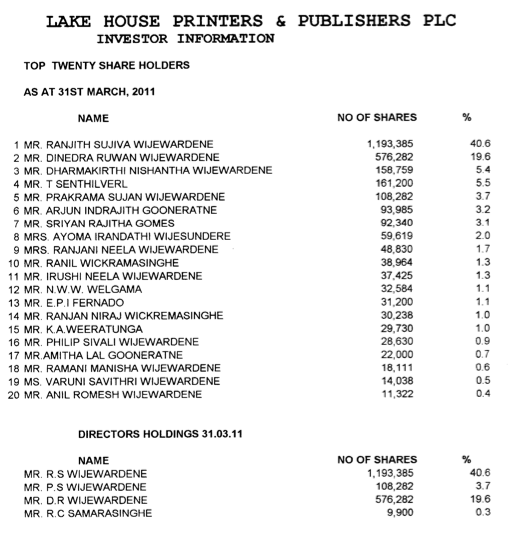 Sri Lanka’s one of the premier properties located in Colombo, owned by a family run listed company is likely to be developed as a mixed development project, a Colombo stock market analyst said.

This move has come at a time when Sri Lanka's commercial rents have risen in 2010 with occupancy levels picking up from a slump in 2009, which saw the end of a 30-year war, whilst the these proposals are likely to be submitted to the owning company of the property according to sources.

It is anticipated by market sources that several international Real estate developing companies are eyeing to develop one of Colombo’s premier properties; freehold land at 41, W.A.D. Ramanayake Mawatha to be developed as a commercial and a residential project.

“We are certain that this property is ideal for commercial and a residential mixed development as it is located at a very prominent place, ” a market source said adding that the location is an ideal for a commercial and a residential development project, since it is housed in the close proximities to Colombo Town Hall, Hyde Park, residencies, head offices of several commercial banks including DFCC Bank, HNB Bank, Sampath Bank, and close to Commercial Bank branches. The property is also minutes away from Sri Lanka’s No.1 private hospital Nawaloka Hospitals.

Apart from the Colombo’s World Trade Centre, Sri Lanka’s Commercial Capital Colombo is lack of commercial space in spite of high demand to setup commercial offices by many companies close to major locations that are in the close proximities of banks and major corporate houses.

Meanwhile, the financials of the listed company outlines that as per the valuation done by an Independent Qualified Valuer on 10 April 2008, this land is valued at Rs.360,060,000 and Rs.33,340,000 respectively. However the revalued amounts have not been incorporated in to the financial statements for the financial year 2009/2010 Annual Report. But market sources and real estate developers highlights that this property’s value according current market price could be over Rs.600 million to date as it is located in a prominent commercial hub at the W.A.D. Ramanayake Mawatha in Colombo.

I noticed you reply with Smily faces or short words like WOW to most of yours posts. It would be good if you share you ideas in words without these continuous short gestures. I have not given you any - reps but soon people will start giving you some if you keep doing so.

Good observations MarketSIra and Quibi. Should keep LPRT under our radar as a speculative play based their property. Their core business earnings are still not great.

Can someone please let me know the previous name of "W.A.D. Ramanayake Mawatha" ?

I'll be lost in Colombo very soon. Thanks

A stock exchange statement by the LPRT said that company’s Chairman Ranjit Wijewardene has gifted 180,674 shares of LPRT to company’s ninth Director Ruwan Wijewardene with the approval of Securities and Exchange Commission of Sri Lanka.

Lake House Printers and Publishers (LPRT) is one of the oldest family owned listed companies of Sri Lanka, and majority stake of the company is held by family members amounting to 90% including United National Party (UNP) Leader and Opposition Leader Ranil Wickramasinghe who has 38,964 ordinary voting share of the company amounting to a 1.3% stake. Lake House Printers and Publishers PLC (LPRT) share trading closed at Rs.145.20 per share on 1 July 2011.

My local newspaper, xxxxxxxxxx, was originally founded by xxxxxxxxx as a mouthpiece for his political views in the late 18th century. Now it is a typical local offering, full of village gossip, fatstock prices, and other issues of local interest in this part of Cumbria.

But, resilient though it is, regular readers cannot fail to notice that advertising has fallen away somewhat (a separate weekly property section has long since bit the dust, for example) and costs have had to be cut.

If you look below the surface of most media companies, whether in newspapers or broadcasting, you find the same phenomenon.

Increased unemployment and lower job vacancies hit recruitment advertising, lower mortgage advances hit property advertising, and so on. And newspapers have to recover relatively high fixed costs from lower levels of revenue. On top of all this, there is the ever-present threat from digital media. Some media groups have managed to offset declining print advertising with increased digital revenue, but it is a tough strategy to pursue.

Most media companies, newspapers being no exception, do well in booming economies. Jim Rogers, that doyen of emerging market investing, reckoned that the first shares to buy in an emerging market that had just opened up were a bank, a brewery, and a newspaper. And Warren Buffett is renowned for his long-standing investment in The Washington Post.

Newspaper and magazine titles are a classic example of an intangible asset. Putting intangibles on the balance sheet so longer provokes quite the negativity among investors that it once did, but establishing what print titles in particular are worth is fraught with difficulty.

Corporate financiers are wont to apply complex formulas to arrive at valuations for companies for the purposes of acquisitions. One treatise on the subject lists around a dozen factors to be ranked on a scale of 0 to 5, including the trend and absolute scale of the subscriber base, renewal rates, trends in advertising revenue, locality, length of time established, the degree to which there are significant competitors, barriers to entry and so on.

Averaging out the scores leaves a would-be buyer with a figure somewhere between 0 and 5, which is then multiplied by 75% of 2.28 times free cash flow (it's a mystery why the number should be so precise), to arrive at an appropriate value for the company.

This suggests that the maximum value that should be paid for a perfect private media company should be around 8.5 times free cash flow. Appropriate upward adjustments can perhaps be made for publicly-quoted newspaper and magazine publishers, especially if they happen to have cash rich balance sheets. But you get the idea.

For broadcasters, especially satellite broadcasters, valuation tends to focus on much the same parameters as for mobile phone networks. Key yardsticks are what is variously known as REVPAR or ARPU, namely average revenue per user. Attention is also focused on 'churn rates', the degree to which a subscriber remains loyal. Low churn either indicates a superb product, or more likely the absence of any credible competition.

Churn manifests itself in print publishing in the form of subscription renewal rates, which are one of the crucial aspects of publishing success. High rates of lapsing subscriptions generally indicate a tired product in need of a revamp.

The value of most media companies, whether traditional print, broadcast or digital, come down to the valuation that should be placed on lists of subscribers and the spending that can be extracted from them through attempting to sell profitable related products. That is one reason why trade publications often branch out into conference organising and 'awards' dinners, which can be a highly profitably adjunct.

There are superficial similarities between media companies, but print media and digital media in particular have a different dynamic and different cost structures.

One should not, for example, underestimate the high costs involved in the physical production of a print publication, especially if advertising revenue is under pressure as a result of some external economic cycle. For this reason, it can be tempting to combine the two, but there are pitfalls, as was quickly discovered in the case of AOL and Time Warner.

Ultimately, though, media companies live or die by keeping subscribers happy, so that subscription renewals are maximised. Subscribers, whether recipients of print publications or eyeballs on a web page, are what the business is about. All of the value in media companies flows from that fact. But just because print can be derided as smearing ink on dead trees, one should not lose sight of how profitable it can be in the right economic climate.

Anything happening on LPRT. Dr Senthilveil divested his quantity!

Real value of LPRT could be even higher. There's a couple of seller at 105 & then no barriers. Very few shares in the market

skyfall wrote:Real value of LPRT could be even higher. There's a couple of seller at 105 & then no barriers. Very few shares in the market

This is the only newspaper left to be taken over by the Proxy of the Government. So don't have too much hope!

New found love of investors can take this to a new level. Highly illiquid share in the market with values.

Highest number of shares traded in many years. Something is going on?

skyfall wrote:Highest number of shares traded in many years. Something is going on?

This is goong to break the resostance soon. Very few shares in the market.

This share worth for me 100Rs and not more with a 1 rs dividends, it does not attract at the levels trading. Apart from being highly illiquid, one should be careful

Broker will tell it will hit 200++ but never buy alone, could be that they trying to dump on retailors.
If you are a someone looking for daily actions then this may not be the right type of counters especially slow movers.
if it gives attractive dividends then its onething to hold, that too not more than 100

This company's property alone at Colombo 2 worth much more than current market cap.