Amendments to be incorporated into Colombo Port City Bill – GL

Amendments to be incorporated into Colombo Port City Bill – GL 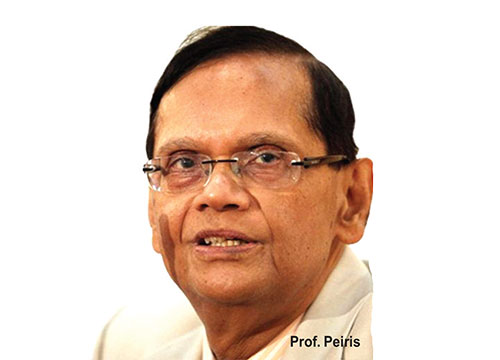 By Shamindra Ferdinando
SLPP Chairman Prof. G. L. Peiris says amendments proposed by government lawyers in respect of the Colombo Port City Economic Commission Bill submitted to the Supreme Court, through the Attorney General’s Department, would be incorporated into the Bill along with the amendments proposed by the Supreme Court.
Education Minister Peiris, one of the intervening parties in support of the Bill, says the government is confident of the passage of it in Parliament this week.
Prof. Peiris discussed the upcoming two-day debate on May 19 and 20 at the regular SLPP media briefing at their Nelum Mawatha Office in Battaramulla.
The former internationally distinguished law professor and Colombo University Vice Chancellor said that the government was determined to go ahead with the mega project as part of their overall efforts to attract investment. The Minister explained the need to go ahead with planned projects, regardless of difficulties caused by the rampaging Covid-19 pandemic.
The Minister briefly described the procedures adopted in the passage of the Bill.
Petitioners that challenged the Bill included the Bar Association of Sri Lanka (BASL) and Ven. Muruththettuwe Ananda Thera represented by SLPP Colombo District lawmaker Wijeyadasa Rajapakse, PC. Petitioners asked for the Bill to be approved by a two-thirds majority in Parliament and at a referendum.
The only MP other than former Justice Minister Rajapakse to express concern over some provisions in the Bill was Yuthukama leader and SLPP National List parliamentarian Gevindu Cumaratunga.
At the onset of the briefing Prof. Peiris said the government was continuing with a vaccination drive to bring the Covid-19 situation under control. The minister acknowledged the difficulty in procuring the required number of covishield doses for those who required the second dose. The SLPP Chairman said that the government was discussing the issue at hand with both governments and the private sector in a bid to obtain the required stock.
Prof. Peiris placed the shortage of covishield vaccines at over 400,000 whereas the health ministry earlier estimated the shortfall at over 600,000.
Minister Peiris acknowledged that a daily count of approximately 2,500 new Covid-19 cases was quite a challenge though the government sustained efforts to keep the situation under control.

https://island.lk/amendments-to-be-incorporated-into-colombo-port-city-bill-gl/
UNQUOTE:
In all probabilities the PCB will be passed in parliament this week and that will be the game changer for Sri Lanka's economy.

Re: Amendments to be incorporated into Colombo Port City Bill – GL

Port City Bill to be passed in parliament with SC amendments