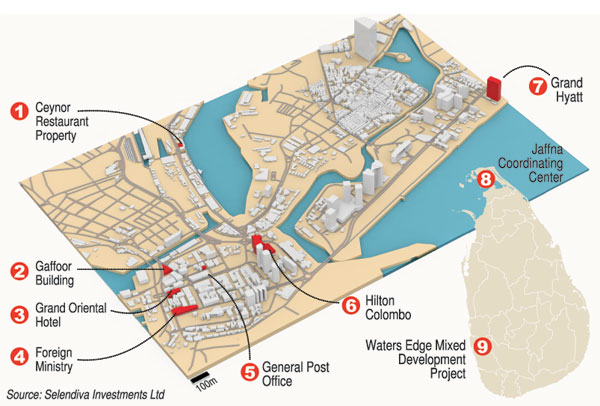 The first of three new ‘special purpose vehicles’ (SPVs) under the Treasury-owned Selendiva Investments (Pvt) Ltd is to be registered next week to raise capital for the development and revival of three hotel properties: the long-overdue Grand Hyatt Colombo, Colombo Hilton and the Grand Oriental Hotel (GOH).

The SPV–the name of which is yet to be revealed–will also seek to infuse funds into a subsidiary created last year under Waters Edge called Waters Edge Recreation Ltd which will build and operate mixed development projects on identified Urban Development Authority-owned or acquired lands around Colombo and also the Jaffna International Coordinating Centre.

Once the first cluster raises capital for Selendiva, it will proceed to the next clusters and against start trading shares for fresh funds. The other clusters will include the historic General Post Office, the Ministry of Foreign Affairs, Cey-Nor and the Gaffoor buildings in the Fort. The same process will be followed.

The complicated arrangement is part of a grand scheme led by the Urban Development and Housing Ministry to follow Singapore’s Temasek Holdings model. Temasek is owned by the Singapore Government and is an active shareholder and investor, mostly in shares.

It is also the outright owner of many assets. Sri Lankan officials followed a 10-day seminar organised by Temasek while the company’s senior representatives also visited Colombo.

SPVs are subsidiaries created by a parent company–in this case, Selendiva Investments–with their own assets, liabilities and legal status. Formed in July last year, Selendiva is owned 100 percent by the Treasury. Two more SPVs are in the works: one for a real estate cluster and another for the creation of a “heritage square”. All of them will target under-performing State-owned assets.

“Selendiva is the Government’s investment arm,” Mr Perera said. “It was formed to take over under-utilised, under-performing Government assets, to restructure them, form them into viable organisations and to list 49 percent of their shares in the stock market while retaining 51 percent with the Government.”

Together, Canwill, HDL and Hotels Colombo will hold 90 percent equity in the SPV while 10 percent will be with Selendiva Investments as “promoter shares” since it will help raise capital for the projects. Selendiva will also have the golden share which gives it veto power.

Forty-nine percent of the SPV’s shares will be listed in the Colombo Stock Exchange, said Shamahil Mohideen, Selendiva Investments Chief Executive Officer. The money will be used to complete the Grand Hyatt, refurbish rooms at the long-neglected Colombo Hilton and enable expansion of GOH.

“We are consolidating the balance sheets of these three assets under the holding SPV, issuing shares to the existing shareholders of the three separate entities and then listing the SPV because we need a substantial asset to go to the stock market and generate funds,” he explained.

When listed, the shares may be purchased by anyone–this is the means of raising capital for the projects. The companies will be run by a management.

“There are two ways,” Mr Mohideen, a hospitality industry veteran, said. “You can get a strategic investor. Or you can raise money in the stock market, again from the private sector. We have given accommodation to both proposals.”

“Any strategic investor can come and take any of those assets,” he continued. “Though they are under one holding company, they can also be divested singly on a 49-51 percent equity basis if the investor brings expertise, because that is value addition and technical expertise that can develop and make this asset profitable. That is our main objective.”

While these are long-term plans, there are immediate priorities. The first is to complete the Grand Hyatt which has stagnated since 2012 amidst numerous issues. Just 24 percent of work was done at a cost of Rs 22bn. The termination of an Italian contractor led to him winning an arbitration award of 9.2mn Euros.

The Government subsequently negotiated this down to 7.2mn Euros but is yet to pay. Selendiva also brought down the project cost from Rs 60bn to Rs 48.5bn and, consequently, increased the return on investment from a measly 1 percent to 12.5 percent.

“We are scheduled to open at floors with 222 rooms including restaurants at the end of December this year,” Mr Perera said. Maga is now the main contractor with other subcontractors. The franchise owner, Hyatta, has not withdrawn from the project and is also welcome to buy shares, Mr Mohideen said. It would be a similar arrangement to Colombo Hilton which is run by the global franchise but owned by the Ministry of Finance.

The GOH was recently restored and refurbished at a cost of Rs 269mn. “Now we want to create marketability for it and to expand the remaining area,” the Selendiva CEO said. “There’s another 160-odd thousand square feet of the York Street building which is idling. We want to raise funds from the stock market to improve that area.”

Whatever properties Selendiva Investments develops are leased on commercial terms from the UDA. “The UDA acquires those lands and gives them to us on a long-term lease,” Mr Mohideen said. “It’s the same as they would do for a private investor except here it’s a Government organisation paying the same commercial terms.”

But sceptics fear that this initiative is part of a scheme to hand over valuable properties to China. Mr Perera said there was no such conspiracy and that it was merely an effort to turn around under-performing, under-used Government assets.

“It’s important to say we cannot discriminate against investors,” Mr Mohideen said. “But we will have a transparent process, whoever it is. And there will be accountability for any losses made. It will be our responsibility to transform these institutions.”

The accountability comes from the stock market listing which mandates adherence to corporate governance and transparency, among other rules. Financial statements will be available online. Separately, reports must be submitted every six months to Cabinet. Accounts are audited by the National Audit Office. (Where GOH is concerned, even the 2018 accounts have not yet been audited).

None of the buildings will be knocked down. They are all protected edifices and will be restored. And the heritage square was particularly important for Colombo, Mr Mohideen said. The capital needs a tourist market outside of corporate visitors. While it was earlier a hub from which they travelled to resorts, better roads have made this unnecessary.

“Now we have more than 4,000 room keys and so many hotels coming in,” he pointed out. “We have to create viability for all this.”

There wasn’t much for tourists to see in Colombo. “We have to create the vibrancy, the attraction, because it creates jobs and increases foreign exchange income,” he said. “We have so many properties, colonial buildings, which are completely dilapidated. We must restore them and exhibit them. It will create that climate, ambience and culture to draw in tourists and create a different branding for Colombo city.”

Now is the time to prepare, officials say. Then, when the market returns to normal and the global economy recovers, Sri Lanka will be ready.

» Colombo prime lands up for grabs
» Demand for prime office space growing in and around Colombo
» Sale of prime land plot in Colombo to China upsets India – Report
» Quiet week at the Colombo bourse
» Colombo Land touching 80 next week.