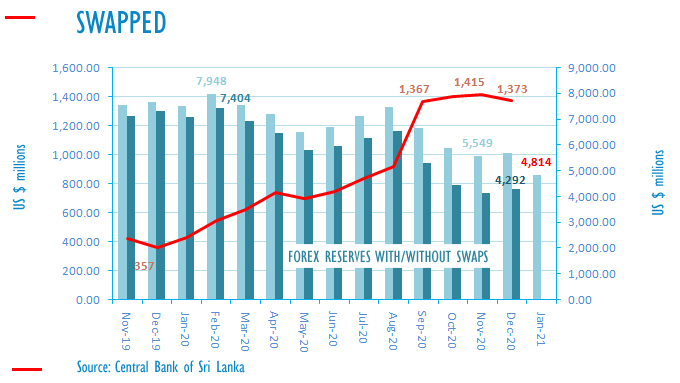 It has been noted that several opposition groups have been speculating about Sri Lanka's forex Reserve level and attempting to convey a status of instability.

In that context, it must be stressed that what is most important is the cash flow, not the Reserve level at a given time. Experienced finance mangers will keep a close watch on the cash flows as they very well know that temporary fluctuations in the reserve level may occur, but that no destability will be caused if the cash flow is managed successfully.

Sri Lanka has worked out its external cash flows in a manner so that every Forex loan repayment and interest payment will be made on time, through the careful management of its existing reserves as well as expected inflows and outflows.

The inflows over the next 3 months, as per the country's Forex pipeline amounts to nearly USD 2,650m as follows:

The Central Bank has also successfully negotiated a SWAP with the People's Bank of China of a sum of USD 1500m, which too, can be accessed and hence could be included as a part of its effective reserves.

In addition, arrangements are being made to roll-over almost the entirety of the SLDB and FCBU loans that are maturing over the balance part of the year, so that such maturities will not lead to a reduction in the Reserve.

Also noteworthy is the fact that, with the repayment of the ISB on 27th July 2021, most of the Government's foreign debt service obligations for 2021 would have been repaid, allowing the country to replenish its reserves during the remainder of the year.

Since the current Forex Reserve balance is at around USD 3 billion after the payment of the ISB of USD 1 billion on 27th July 2021, the available reserves within the next few months would be over USD 7 billion, when considering the expected inflows and outflows.

Re: Sri Lanka’s Forex Reserves to exceed US$7 Billion by end 2021

All above are temporary measures

We have to earn foreign exchange through hard work Foreign employment,