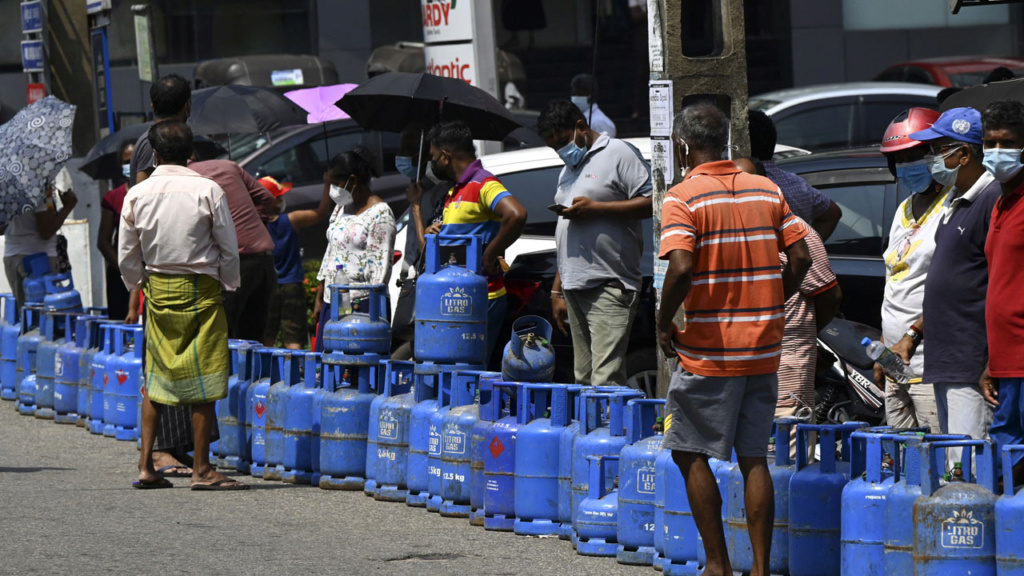 Since 2010, Sri Lanka witnessed a sharp rise in foreign debt, reaching 88% of the country's GDP in 2019. The onset of the COVID-19 pandemic induced global recession accelerated the crisis and by 2021, the foreign debt rose to 101% of the nation's GDP, causing an economic crisis. Several protests were staged by the political opposition demanding the current administration to solve the financial crisis and to immediately resign in wake of the wider economic crisis.

In 2015, Nobody recalls how desparate the Rajapakses wanted to come to power?- Why did Chamal rajapakse also give nominations under a different party? politics here was determined by two people- Sarath N Silva & Mahinda Deshapriya,

Background
In 2021, the Sri Lankan Government officially declared the worst economic crisis in the country in 73 years.

Despite commentaries blaming China for the debt crisis, the Australian Lowy Institute pointed out that Sri Lanka was "not engulfed in a Chinese debt trap", because external debt owed to China was only about 10% of the debt stock in April 2021. Instead, the majority of Sri Lanka’s external debt stock is owed to international capital markets, which accounted for 47%. Another 22% is held by multilateral development banks, followed by Japan having 10% of Sri Lankan external debt.

In 2020, a New York based agency said Sri Lanka's existing funding sources did not appear sufficient to cover its debt servicing needs, estimated at just over $4.0 billion in 2021. According to the agency Bellweather, "To solve Sri Lanka’s ‘budgetary problem’ in repaying debt, Treasuries auctions have to succeed. When that is done, the ‘transfer problem’ of foreign exchange will be automatically solved. But this is beyond the ken of Keynesians. Instead, with failed Treasury bill auctions filled with printed money, the country is slipping deeper into debt."[16] To resolve the debt crisis, Bellweather noted that Sri Lanka would need a credible fiscal plan and monetary policy, taxes have to be hiked in order to repay debt, and interest rates and opening of imports would allow taxes to flow back to the Treasury. While it is possible to raise rates and generate dollars to repay foreign debt by curtailing domestic credit, it is not practical to do it on an ongoing basis for many years. If investors see foreign reserves going up after debt repayments, confidence may come back but it is a painful affair, which may or may not work given the current ideology.

The country's tourism sector was hit by the 2019 terrorist attack, and the COVID-19 pandemic prevented it from recovering. According to the World Bank in June 2019, "Despite the heavy toll of the COVID-19 pandemic on Sri Lanka’s economy and the lives of its people, the economy will recover in 2021, though challenges remain." Positive signs of recovery are already being observed, proper taxation to build up self-dependence and to avoid high dependence on foreign debts in future has been highly encouraged. The current social protection initiatives to help those that have lost their jobs during the debt crisis have been deemed effective. Economists suggested that besides proper taxation, a more export-oriented growth would be necessary to uplift the Sri Lankan economy from the current debt crisis, and it was hoped that Sri Lanka would make a full financial recovery.

By the end of 2022, the country is due to pay USD 4 billion to debtors, whereas in April 2022, government reserves amounted for USD 2.3 billion.

Agricultural crisis
In 2021 Sri Lanka started the first "100% organic farming" program and imposed a countrywide ban on inorganic fertilizers and pesticides in June 2021. The program was welcomed by its advisor Vandana Shiva, but it ignored criticism from the scientific and farming communities who warned about the possible collapse of farming, including a financial crisis due to devaluation of national currency, which pivoted around the tea industry.

By September 2021, Sri Lanka experienced a massive drop in farming output, by up to 50%, and food shortages. The situation in tea industry was described as critical, with farming under the organic program being described as ten times more expensive and producing half of the yield by the farmers. In September 2021, the government announced an economic emergency, as the situation was further aggravated by the falling national currency exchange rate, inflation rising as result of high food prices, and pandemic restrictions in tourism which further decreased the country's income.

The banning of the trade of chemical fertilizers and pesticides produced a severe economic crisis, since the population expects to remain without income and without food. The government cancelled some of these measures, but importing urea remains banned. Sri Lanka is seeking to introduce peacetime rationing of essential goods.

In November 2021, Sri Lanka abandoned its plan to become the world's first organic farming nation following rising food prices and weeks of protests against the plan.

Development
Despite the growing concerns over the inflationary pressure, Ajith Nivard Cabraal, the Governor of the Central Bank of Sri Lanka, insisted in January 2022 that Sri Lanka does not need IMF relief, as he was optimistic that Sri Lanka can settle its mandatory outstanding debt, including its international sovereign debts. As of February 2022, the foreign reserves of Sri Lanka fell to $2.36 billion. Sri Lanka has foreign debt obligations of $7 billion, including $1 billion worth of sovereign bonds which is to be repaid by July 2022. The government is planning to hire a global law firm to provide technical support and assistance on debt restructuring.

A delegation from the International Monetary Fund made a visit to Sri Lanka from 7 December to 20 December 2021 in order to assess and review Sri Lanka's economic policies. The International Monetary Fund's executive board had discussed Sri Lanka's economy after the end of the annual discussions which took place on 25 February 2022. As of 25 February 2022, the IMF had declared that the public debt of Sri Lanka is unsustainable and warned the Sri Lankan government to refrain from printing money to prevent monetary instability, but lauded the vaccination drive which had cushioned the impact of the pandemic. The IMF had assessed the prevailing economic calamity of Sri Lanka by compiling an Article IV Consultation Assessment.In addition, the IMF predicted that the economy of Sri Lanka is expected to grow by 2.6 percent by 2022.

In January 2022, President Gotabhaya Rajapaksa's office stated that it would appeal to China to reschedule its debt burden during talks with the Chinese foreign minister Wang Yi. As of March 2022, there has been no official response from China.

As of 7 March 2022, Ajith Nivard Cabraal reported that the regulator of the banking system was effectively devaluing its national currency with immediate effect, and the official rupee rate fell to a record historic low of Rs. 229.99 against the US Dollar. The devaluation decision is also seen as a massive step-up in the country's attempt to seek IMF assistance and bailout. The former deputy governor of the CBSL, W.A. Wijewardana, criticized the monetary policy decisions undertaken by CBSL, especially for its decision to fix the rupee to Rs. 230, indicating that the FOREX crisis cannot be solved unless the floating exchange rate is implemented. Opposition MP Harsha de Silva opined that the devaluation of LKR to Rs. 230 is still insufficient and not enough to avert Sri Lanka's foreign reserve crisis. Soon after the rupee devaluation, Sri Lankan stocks fell to a 4 month low after the all share price index lost 4 percent on 8 March 2022.

The repercussions of the ongoing tense situation between Ukraine and Russia due to the Russo-Ukrainian War is felt in the already sluggish economic conditions of Sri Lanka. The 2022 Russian invasion of Ukraine has further exacerbated the economic calamity of the country as Russia is the second biggest market to Sri Lanka in tea exports and Sri Lanka's tourism sector is heavily reliant upon these two nations as most of the tourist arrivals are from Russia and Ukraine. As a result, the Ukrainian crisis has put a halt to the path of economic recovery of Sri Lanka with both tea and tourism sector have been hit hard.

On 22 March 2022, the government ordered the military to post soldiers at various gas and fuel filling stations to curb the tensions among people who line up in queues and to ease the fuel distribution. There are various reports claiming at least three people have died while standing in long queues for hours due to excessive heat. One motorcyclist was stabbed to death by a three wheel driver in a fuel filling station over a dispute.