Stock Market on the knife-edge

Stock Market on the knife-edge 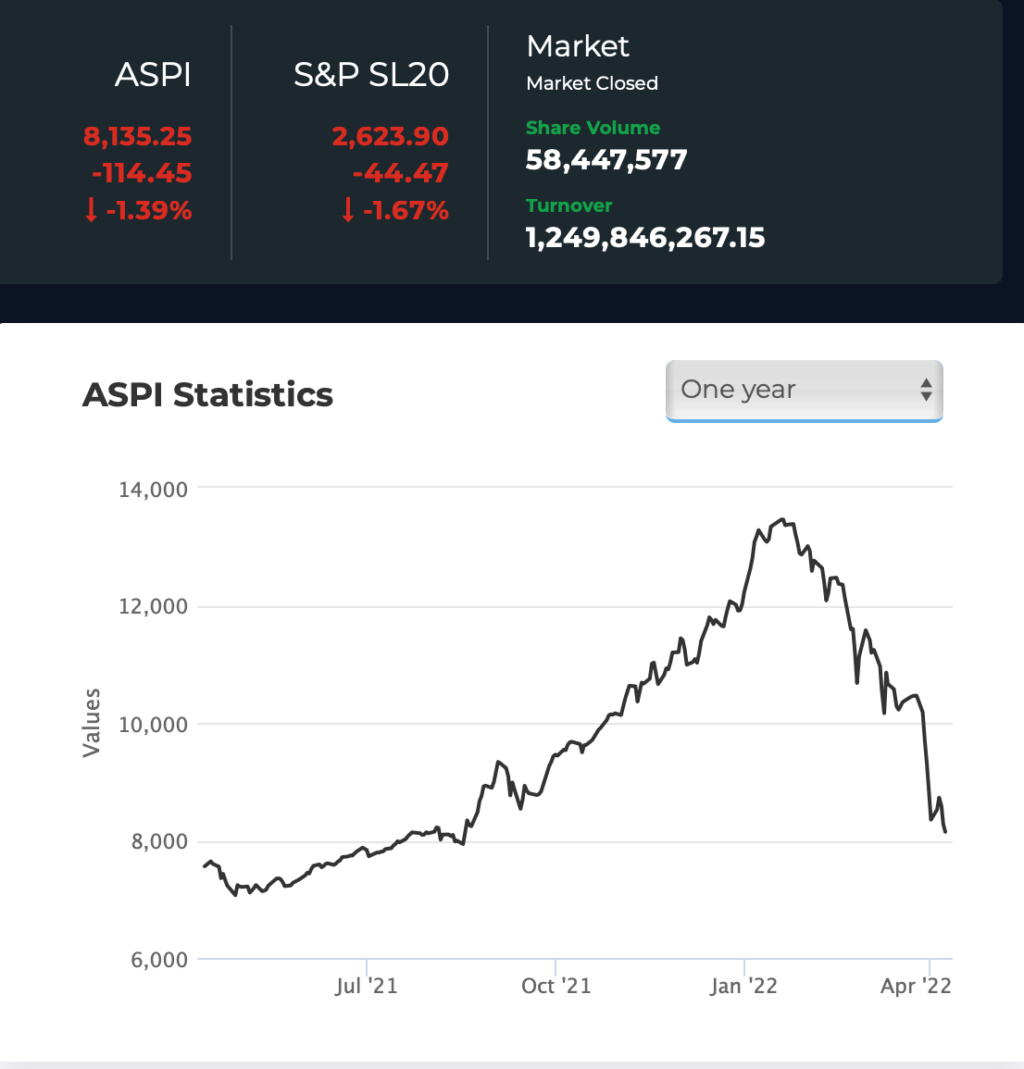 The market’s poised on a knife-edge as the prime minister holds meetings and spells out priorities in a desperate attempt to avoid not just outright economic collapse, but also mitigate damage from default down the road. It’s not very often, after all, that you see possibly the largest one-time rate hike by the CBSL (Central Bank of Sri Lanka), that too in an emergency meeting ahead of schedule, and also attempt to control record stock market crash within next few days.

The sudden monetary policy committee meeting of 8 April, and the 700bp hike in the interest rate, was in fact the Central Bank surrendering to the reality of stagflation. The current account is in deep trouble and exports barely budged even though the rupee was murdered in the both money and exchange market, and the only way prices are headed is up; hence the extremely hawkish step by the central bank.

It seems businesses are counting on the government to obtain the IMF (International Monetary Fund) programme and produce enough order and growth to keep the wheel turning for now; despite the inflation. Even the rupee has broken all records to rise to 330 or thereabout against the dollar, after touching 300 just a few days ago.

But much of the stock and currency market reaction is based on perception, while the SBP’s squeeze was forced by facts that even new Governor cannot deny anymore. So the next few days are going to be crucial. And it doesn’t help at all that attempts to form a new cabinet and talk to the IMF again are coinciding with Sri Lankans agitating on the streets and doing all it can to keep just those things from happening.

The jury is still out on how bad an idea the mass protest was, but there’s no doubt that Sri Lankans have chosen to demand an immediate resignation of its leaders. And on top of laughing away a parliament without any credible opposition, it will also milk the hardships caused by the government’s adjustment policies, especially if it’s to go back to the IMF, for all they’re worth; now that the shoe is on the other foot.

That’s when perception in the market will change once again. If there is going to be more political confrontation at this stage, especially if the government’s investigation finds nothing in the so-called cable threat, then there is going to be a lot more uncertainty. That will quickly spook whatever little investment, local as well as foreign, portfolio as well as direct, that might have been attracted by the recent shift in sentiment.

It’s also a little strange that while everybody’s been talking about how long or short the government’s tenure might be, and what that would mean for the country’s politics, nobody’s yet talked much about the budget.

What we do know for sure is that most, if not all, important targets from the last budget are sure to be missed, exports continue to disappoint, remittances are plateauing, and inflation expectations have upset the central bank’s calculations.

Some of the common effects of a sovereign default are as follows:

Interest Rates Rise
The most immediate impact is that borrowing cost rises for the nation in the international bond market. If the government itself is borrowing at a higher rate, then the corporates also have to borrow at increased rates. As a result, interest rates rise and the price of bonds that were issued earlier collapse even further. Trade and commerce is negatively affected since banks are skeptical of lending money at high rates to borrowers.

Exchange Rate
International investors become wary that the defaulting country will continue to print money till it reaches hyperinflation. As a result, they want to exit the defaulting nation. As a result, the exchange rates in the international market plummet as everyone tries to sell their local currency holdings and buy a more stable foreign currency. If a country is not too dependent on international investment, then the effect of exchange rate may be marginal. However, countries which default on their debt tend to have massive foreign investments.

Stock Market Crash
Needless to say, the above-mentioned factors negatively affect the economy. As a result of the stock market also takes a beating. Once again the cycle of negativity feeds off itself. The stock market crash perpetuates itself. It is not uncommon for stock markets to have 40% to 50% of their market capitalization wiped off during a sovereign debt default.

Trade Embargo
Foreign creditors are often influential in their home country. Hence after default, they convince their countries to impose trade embargos on the defaulting nations. These embargos block the inflow and outflow of essential commodities into a nation thereby choking its economy. Since most countries import oil to meet their energy needs, such trade embargos can be disastrous. In the absence of oil and energy, the productivity of an economy takes a severe beating.

Rising Unemployment
Private firms and the government both feel the negative effects of the economic climate. The government is not able to borrow and tax revenues are also at all-time lows. Hence, they are not able to pay salaries to the workers on time. Also, since there is a negative sentiment in the economy, people stop consuming products. As a result, the GDP comes down and accentuates the unemployment cycle.
Share this post on: