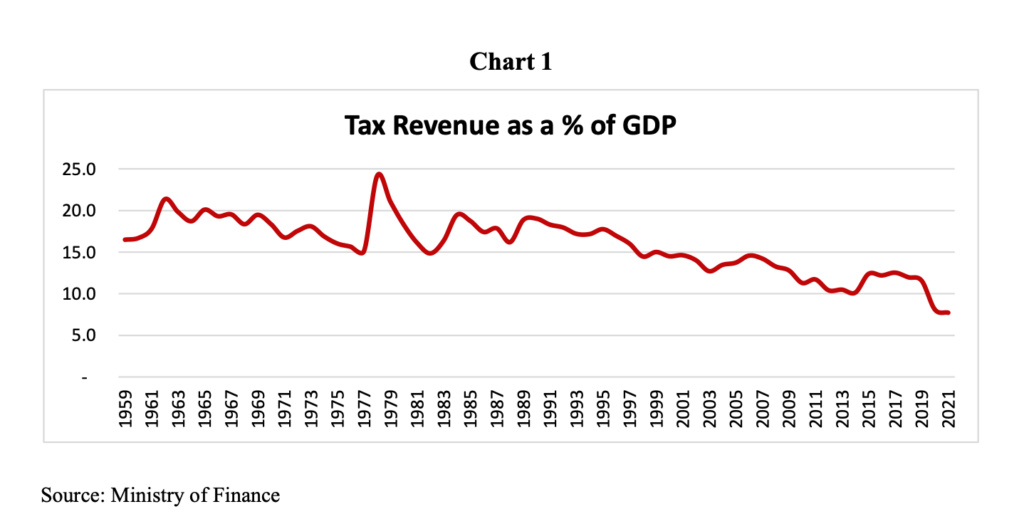 Highlights
 Government’s fiscal operations have played an important role in improving economic and social conditions in Sri Lanka over the years.
 However, at present, dismal fiscal sector performance has caused many imbalances in the macroeconomy.
 Exceptionally low tax revenue, rigid recurrent expenditure, a large budget deficit, accumulated and now unsustainable debt are the key concerns in the fiscal sector.
 Deficit financing poses a critical challenge due to the shortfall of foreign financing following the loss of international capital market access.
 The resulting rise in monetary financing has caused severe macroeconomic imbalances.
 Hence, strong revenue-based fiscal consolidation measures are imperative to improve the
fiscal performance in the near to medium term.
 Sri Lanka should urgently undertake difficult, but much needed and far-reaching reforms to address the accumulated and persistent issues.
 The time has come to put the “house in order” and revamp the Government’s fiscal operations to strengthen macroeconomic stability and facilitate economic growth in the medium to long term.
 The Government’s decision to seek the assistance of the International Monetary Fund
(IMF) will be a starting point and a catalyst to implement these critical reforms with the support of the citizens and other stakeholders.
 Responsible and disciplined fiscal management has become more important than ever.
 In this process, the country and its citizens will have to go through a period of difficulty.
 A strong social protection network is required for the vulnerable and needy segments as reforms will be painful.
 Failure to implement required policy reforms at this critical juncture will be very costly.
 However, it will lay a strong foundation to create a modern and robust economy for the future generations to come.

Government fiscal operations have played an important role in improving economic and social conditions in Sri Lanka during its post-independence history. However, the dismal performance of the fiscal sector over the years has contributed to macroeconomic instability and failed to support long-term growth. The excess aggregate demand generated by unsustainable fiscal deficits has resulted in elevated inflation, pressure on the balance of payments (BOP) and currency volatility.

Sri Lanka today is facing a severe BOP crisis with insufficient foreign exchange to buy essential imports such as food, energy, and pharmaceuticals, let alone meeting its debt service obligations. Sound macroeconomic fundamentals cannot be achieved without prudent and sustainable fiscal outcomes. Accumulated issues in the past have now exploded and caused severe disruptions to the day-to- day lives of Sri Lankans, leading to widespread public displeasure and social unrest.

The fiscal sector performance in the recent past is characterised by exceptionally low government revenue, rigid recurrent expenditure, high budget deficits, and accumulated debt which is now unsustainable. The weak fiscal position has manifested in credit rating downgrades, loss of access to international capital markets and foreign financing. As a result, the Government has increasingly relied on domestic financing of the budget, including monetary financing by the Central Bank, in turn leading to significant macroeconomic imbalances.

Government revenue declined particularly sharply in the last two years due to various reasons including the economic downturn caused by the COVID-19 pandemic, import restrictions imposed to ease the external sector pressure, but most importantly, due to the ultra-low tax regime introduced in late 2019 and the COVID-19 related easing measures in early 2020 (Chart 1). Even before these tax cuts, Sri Lanka was a country with one of the lowest revenue- to-GDP ratios in the world, and the tax cuts drove Sri Lanka closer to the bottom of this list.