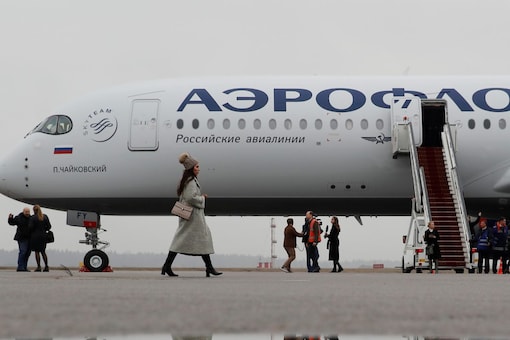 Aeroflot has announced that it will be suspending commercial flights to Sri Lanka for the time being, due to “unreliability of the situation in terms of ensuring unhindered flights of the airline’s aircraft to Sri Lanka”.

The airline launched its services in Sri Lanka on 4th November, 2021.

Colombo Commercial High Court Judge Harsha Sethunga issued the enjoining order on the respondent Russian airline after hearing a complaint filed by Celestial Aviation Trading Limited in Ireland, and this enjoining order will remain in effect until the 16th of June.

The plaintiff states that it has a settlement case with the respondent Russian Airlines, and therefore, the complainant had filed a complaint seeking an injunction restraining an aircraft belonging to the respondent airline from leaving Sri Lanka.

After a Colombo court denied permission to an Aeroflot flight earlier this week to fly to Moscow from Colombo, the Russian flagship carrier, suspended all flights to Sri Lanka.

It remains unclear as to why earlier this week Sri Lankan officials detained the Aeroflot Airbus A330 but according to a report by news agency AFP, current sanctions on Aeroflot due to war on Ukraine could be a likely cause.

The Russian aviation body suggested that the Russian airlines which operate using rental planes registered in foreign countries cease flights abroad, in order to avoid the seizure of those planes due to the sanctions.

The SU289 could be part of a commercial dispute since it is owned by GE Capital Aviation Services which is an Irish–American commercial aviation financing and leasing company.

The Celestial Aviation Trading Limited of Ireland filed a complaint at a Sri Lankan commercial court following which the aircraft was barred from leaving.

The Russian airlines told passengers in Colombo who are due to return on June 2, June 4 and June 5 that they will be brought back to Russia from Sri Lanka on June 4 and June 5. The repatriation flights will fly to Colombo but without passengers, the company said.

The company assured passengers that those  with tickets to Moscow for later dates would also be brought home as scheduled. Aeroflot said that they could not depart from the Bandaranaike International Airport (BIA) due to absence of a permit.

The passengers who were onboard the seized flights were accommodated in nearby hotels, officials at the BIA told news agency AFP. They also said that they were told that the reason behind the detention was ‘likely a commercial dispute’.

The SU-289 flight still remains with Sri Lanka and the court will listen to the matter once again on June 8 and deliver its verdict. The flight is banned from leaving the country until June 16.

The Airbus A330-343 operated by Russian state-owned airline Aeroflot was denied permission to fly to Moscow as scheduled on June 2 amid a legal dispute with a leasing company. The flight had more than 200 passengers onboard.

Celestial Aviation Trading Limited, one of the largest plane-leasing firms, is seeking to confiscate the jet after Russia failed to return its property.

The European Union in February imposed a wide-array of economic sanctions on Russia, including banning the leasing of EU airplanes, after it invaded Ukraine.

The bloc’s sanctions demanded Russia return any aircraft leased from EU firms by the end of March.

Russia had more than 500 aircraft leased from the West out of a total park of about 1,300, according to news agency RBC, meaning fulfillment of the sanctions would have decimated the nation’s travel industry.

Russia’s aviation regulator warned its airlines from flying leased planes abroad amid concern they could be seized.

Leasing companies have confiscated 78 planes operated by Russian airlines since the sanctions were imposed, though nearly all occurred within the first few days.

A Sri Lanka court will hold a hearing regarding the case on June 8, local media reported.

In the meantime, the Russian passengers have been put up at a hotel by Aeroflot pending resolution of the matter.

Sri Lanka has proved beyond doubts that its a 'jokers paradise' in relation to the detention of an Aeroflot aircraft at the BIA and now the authorities are urging to suspend the enjoining order, in other words 'damage control'!

At least at this stage one should learn to think before you act in order to avoid unnecessary regrets.

» Why Russia Is Getting Closer To Pakistan And Abandoning India?
» Tea prices up and up.Plantation shares down and down!
» 3 Biggest Companies in Sri Lanka
» Russia and China express firm support to Sri Lanka
» Manipulators can makes shares go down as they makes sheres go up