FINANCIAL CHRONICLE™ » CORPORATE CHRONICLE™ » Is this the right time to invest in the Colombo Stock Market?
Tweet

Is this the right time to invest in the Colombo Stock Market? 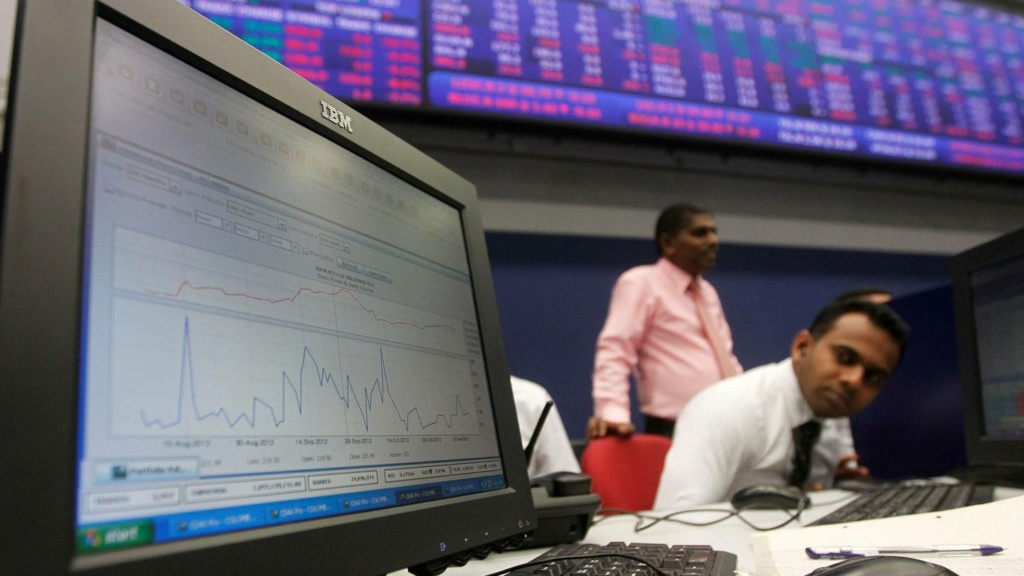 Sri Lanka is in total Disarray
- Market is near its rock bottom. (Near ASI 8000)
- Rupee is heavily Depreciated (USD 1=LKR 365/-)
- Interest Rates are at its highest (TB Rates around 24% p.a)
- Hotel industry is struggling (Less than 30,000 Tourist Arrival in May)
- Inflation has Sky Rocketed. (Official 39%, Unofficial 133%)
- Agriculture industry in disarray due to shortage of Fertiliser.
- Restriction on import of all luxury items and some essentials.
- No Fuel, Gas and Electricity due to enegery crisis. Crude Oil hits US$ 120 per Barrel in June 2022.
- Taxes to be increased. VAT, Corporate/Income Tax. VAT likely be increased to 18% and Corporate Tax to 35%
- Country is likely to face a food crisis in September 2022.
- Debt Default by Sri Lanka in year 2022, first time ever to happen since independence. Worst ever Credit rating in history.
- Foreign Currency Reserves near zero (US$ 50mn in May 2022).
- No notable Foreign Direct Investments.
- Foreign Inward Remittances at its lowest. Official remittances in January 2022 were down 61.6 percent from a year earlier to US 259.2 million
- Significant reduction in output of tea, rubber and other export crops. Production of finished tea fell by 4 million kilograms in the first quarter of this year.
- Industrial Production in Sri Lanka is at its lowest. Decreased by 13.61 percent in March of 2022 over the same month in the previous year.

Feel Free to add more and justify as to why investors should invest in the Colombo Stock Market at these level?

• Fiscal stimulus provided by the government in late 2019 coupled with the pandemic related economic fallout resulted a record decline (-28% YoY) of government revenue in 2020. However, government revenue only increased 7% YoY in 2021 widening the fiscal deficit to an unsustainable level putting pressure on budget financing.
• Given the need to assure debt and macro sustainability, the government is compelled to take hard fiscal reforms specially on the verge of seeking an IMF bailout. Hence, newly appointed Finance minister (Prime minister) proposed several revisions to existing tax structure addressing the fiscal consolidation needs. 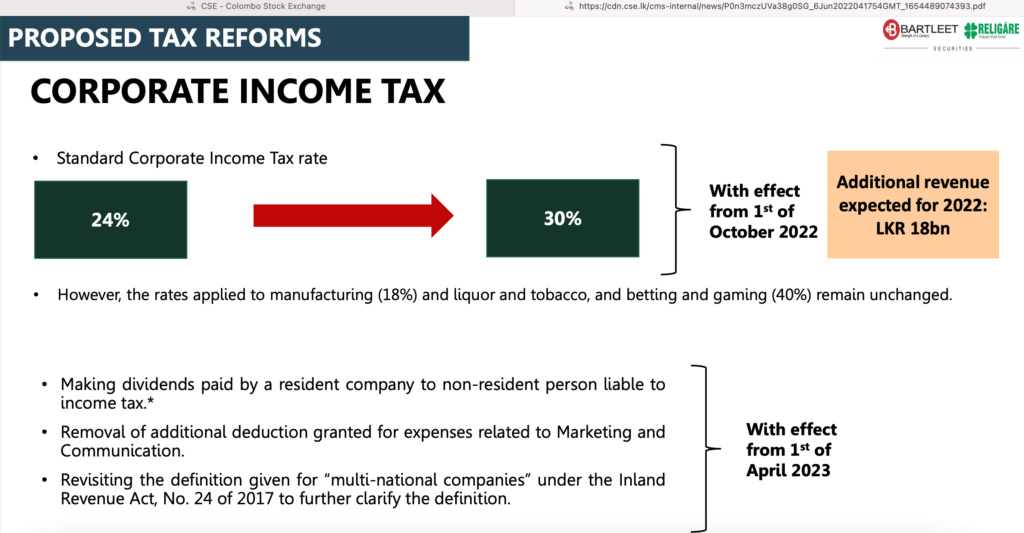 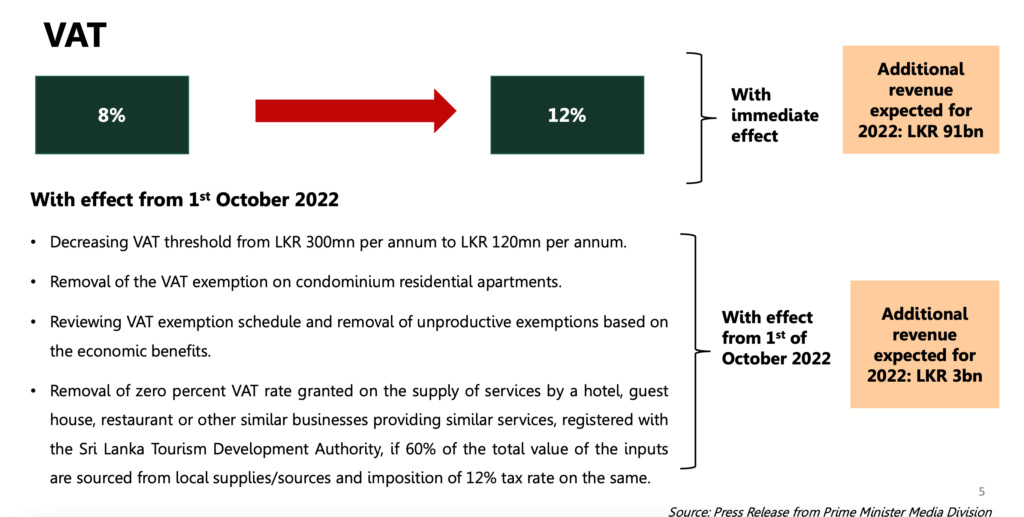 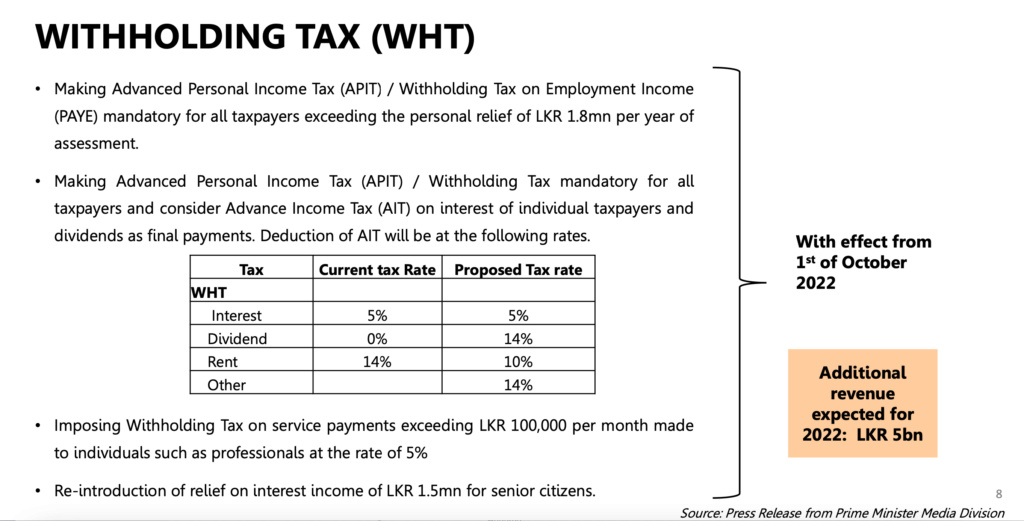 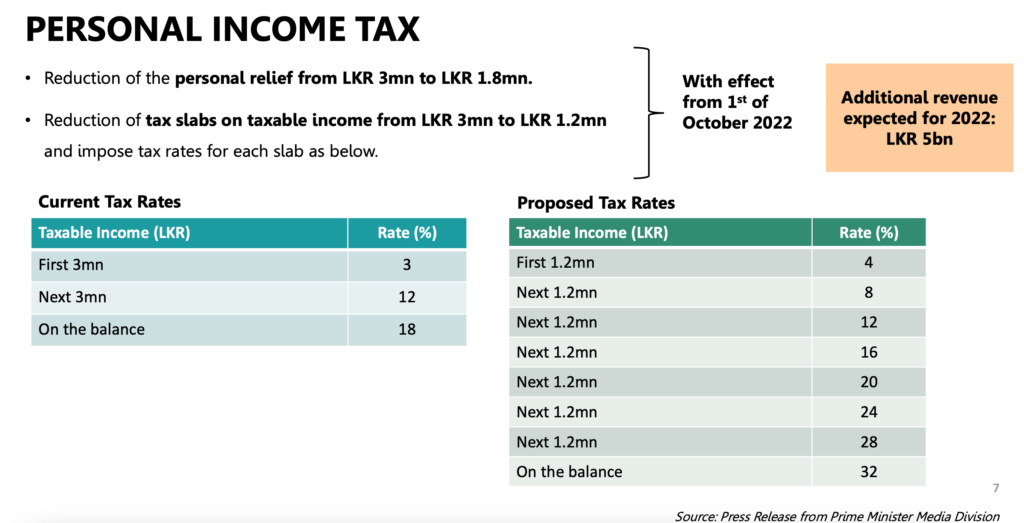 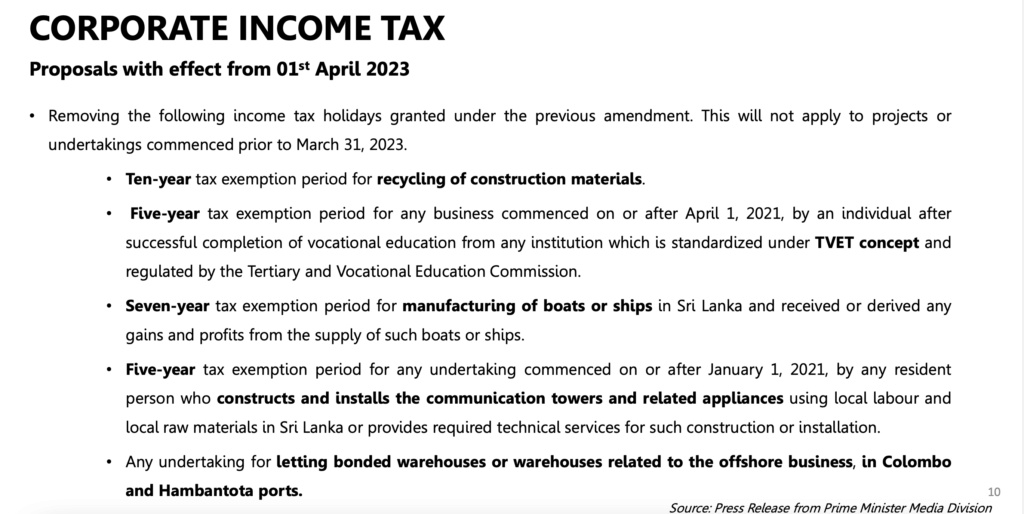 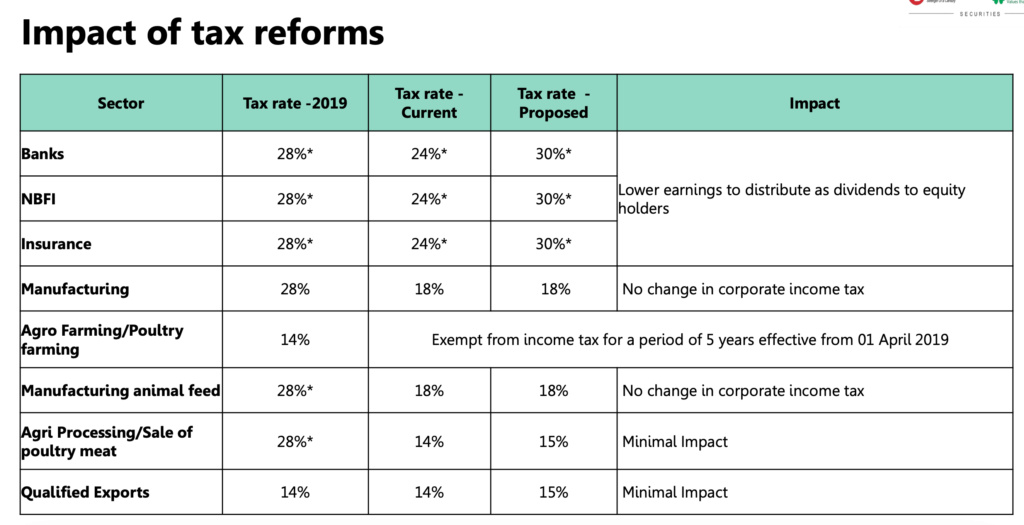 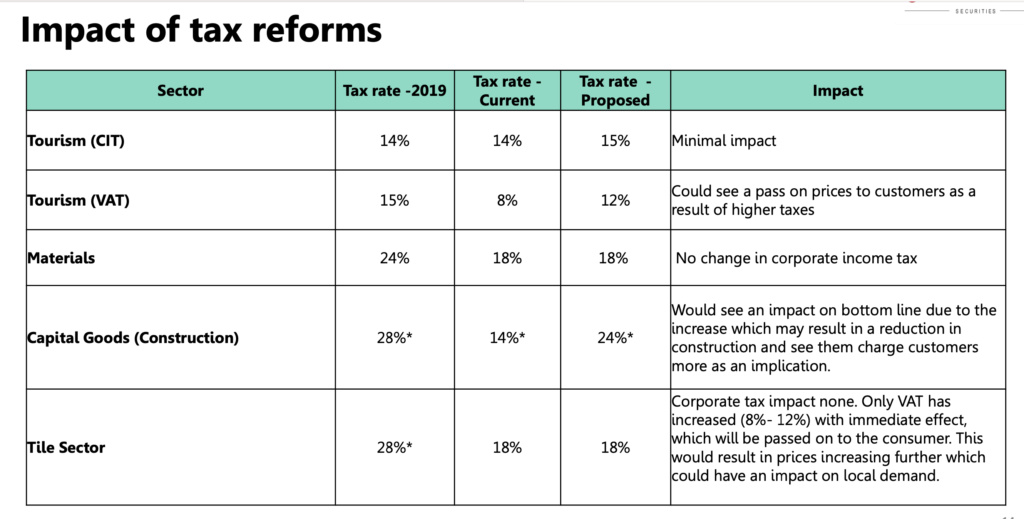 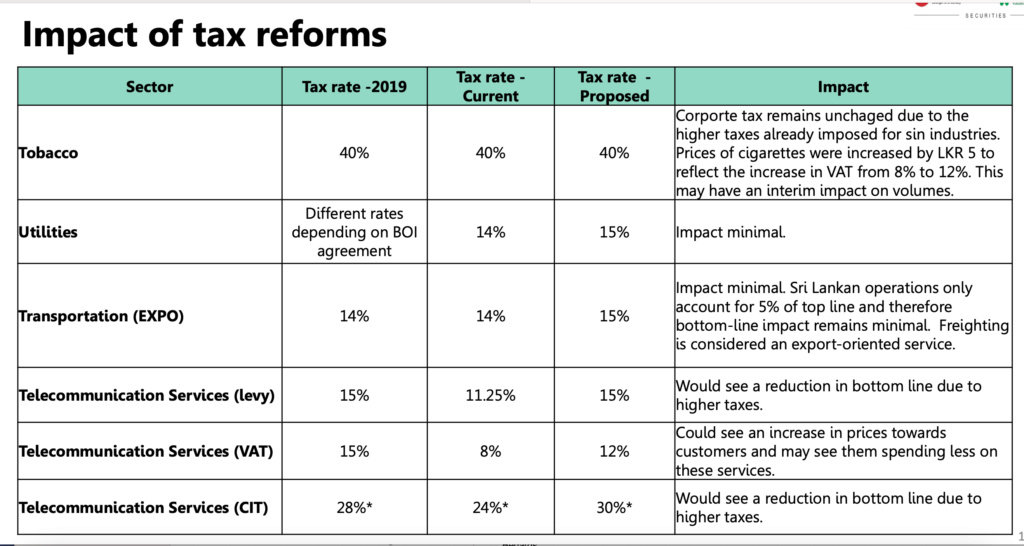 Sri Lanka’s bond markets were foxed after the state debt office rejected bids for 3-year bonds at yields over 31/32 percent but accepted up to 35 percent for 7 year bonds, mar- ket participants said.
https://economynext.com/sri-lanka-bond-markets-foxed-after-7-year-bonds-sold-around-35-pct-97258/

The grey market for foreign exchange is making a comeback, rendering the efforts taken to put a restraint on the operation of the informal channels futile and thereby causing it to thrive again, the Central Bank warned.
https://www.dailymirror.lk/business-news/CB-warns-of-return-of-grey-market-due-to-open-account-exemptions/273-240888

Sri Lanka welcomed over 14,500 international visitors for the first 10 days of July, alt- hough the country continues to witness a massive economic and social upheaval.
https://www.dailymirror.lk/business-news/Over-14-500-tourists-arrive-in-SL-from-July-1-to-10/273-240893

Sri Lanka’s Central Bank Governor signalled yesterday he would stay in the job but warned that prolonged political instability in the country may delay progress on negotiations with the International Monetary Fund (IMF) for a bailout package.
https://www.dailymirror.lk/business-news/CB-Governor-signals-he-will-stay-in-job-warns-turmoil-impedes-IMF-talks/273-240895

Business news
INSEE Cement has extended production of its Portland Composite Cement to its Ruhunu Cement Plant, increasing production of the new SLS 1697 product to meet the growing demand of the local market.
https://www.dailymirror.lk/business-news/INSEE-Cements-Galle-facility-begins-production-of-Portland-Composite-Cement/273-240882

Political news
The United Nations has called for smoother transition of power whilst reiterating its sup- port for Sri Lanka and her people.
https://www.ft.lk/front-page/UN-calls-for-smoother-power-transition-stands-ready-to-support-SL/44-737390

Parliamentarians will vote to elect a new President by secret ballot on 20 July if no con- sensus is reached on a single candidate to take over the Presidency after the resignation of President Gotabaya Rajapaksa.
https://www.ft.lk/top-story/MPs-to-elect-new-President-on-20-July/26-737397

The new administration that will be in place following the resignations of President Gota- baya Rajapaksa and Prime Minister Ranil Wickremesinghe should continue the engage- ment with the International Monetary Fund (IMF), “which is the primary way to save the economy from this calamity,” the Central Bank Executive Officers’ Union said in a statement.
https://www.dailymirror.lk/business-news/CB-Executive-Officers-call-for-continuation-of-engagement-with-IMF-fiscal-reforms/273-240890

International news
Asian currencies began the week under slight pressure due to investors’ concerns about the outlook for the global economy ahead of key data due to be released by the US and China this week.
https://www.themorning.lk/asian-currencies-kept-under-pressure-ahead-of-key-us-and-china-data/

Oil prices fell on Tuesday as fresh COVID-19 curbs in China, the world's biggest crude importer, and fears of a global economic slowdown weighed on the fuel demand outlook.
https://www.reuters.com/markets/commodities/oil-slides-renewed-china-covid-curbs-temper-fuel-demand-outlook-2022-07-12/

Asian shares fell on Tuesday, Weighed down by the prospect of further monetary policy tightening by central banks, China’s renewed COVID outbreak and Europe’s energy short- age, which also left the euro a whisker from parity with the safe haven dollar.
https://www.reuters.com/markets/europe/global-markets-wrapup-1-2022-07-12/