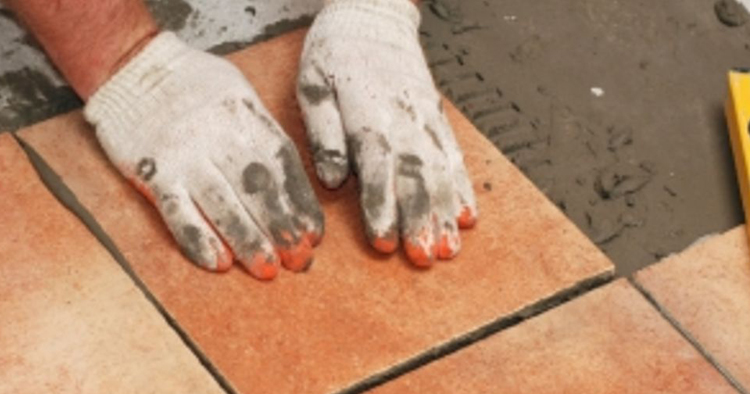 The recent acquisition by Dhammika Perera the Sri Lankan business mogul (with related parties) of Lanka Ceramics, a large public quoted company, brings into focus once again the gaping lack of laws and regulations concerning commercial activities in this country. Not only do we not have laws governing vital areas of the economy but more importantly suffer from an obvious ignorance in such matters at the highest levels.

Dhammika Perera also owns Royal Ceramics, which is another public quoted company in the same business as Lanka Ceramics, namely tiles. With the acquisition last week of Lanka Ceramics, he is now in a near monopolistic position in this area of economic activity. It is well known that Perera, who is undoubtedly one of the richest men in this country, also has controlling stakes in large companies such as Hayleys, Amaya Leisure, Fortress Resorts, Vallibel Finance, LB Finance and New World Securities.

Given this background, in a more advanced country Perera would be subject to various regulatory regimens. His wide business interests make him an interested party in many economic activities/policies of the country in a significant way. As such, in a country with developed systems his activities would be monitored and regulated by the State in the greater interest of the public. But leave alone monitoring his activities, it is an astonishing fact that this Government thought it fit to appoint him at one time as a Secretary of a Ministry and also the Chairman of the vital Board of Investments (BOI).

In these positions Dhammika Perera was wearing the hats of an administrator, policymaker and in a way a regulator. As a Secretary of a Government Ministry, he would be privy to policy considerations and other concerns of the Government at the highest levels. In the shoes of a senior public servant, he also has direct access to decision makers in the Government.

It may well be true today that our senior public servants are poor quality, their spirit broken by years of relentless politicising and corruption. Although politicians who are responsible for this state of affairs would hate to admit it, even they have to accept the reality and bring people from outside to fill various posts including the secretary posts of the various ministries. But this does surely mean appointing persons with potential conflict of interest situations to these sensitive positions.

The main function of the Board of Investments is that of a facilitator for foreign investors. It has the power to grant various incentives to investors such as tax holidays, preferential tax rates, exemptions from Customs duty and foreign exchange controls among other things. For a businessman competing with his many rivals locally, this would be a very tempting opportunity indeed to reward friends and deny competitors.

I have nothing personal against Dhammika Perera who by all accounts is a success story which should be admired. By any means this is not the first time that businessmen with potential conflict of interest situations have been appointed to high public posts in this country, the appointment of Harry Jayawardena to various Government boards by the previous government being one. But what concerns us is a style of government which completely ignores fundamental economic/legal/moral concerns such as conflict of interest situations, influence peddling and monopoly building which are concepts fundamental to good governance.

With such an attitude of indifference prevailing, the fact that we do not have an anti-trusts authority as in most countries is not surprising. Although we eagerly seek respect from the rest of the world, to put the house in order is not a priority for us. Whatever institutional steps we have taken to curb harmful economic activity in the past have turned out to be toothless tigers because of corruption and political influences.

It is basic economics that a monopoly is bad for the consumer because of the arbitrary pricing power it commands as well as its tendency to lower the quality of the product as the consumer really has no choice in the matter. Monopoly power in sectors such as banking and media can have other ill-effects as well. Overall, monopolies and cartels are considered anti-competitive and harmful to a market economy.

There are certain situations where monopolies become inevitable for reasons such as very high start-up costs and practical difficulties in competition. It is very difficult to conceive of a large city having several water or power suppliers. Similarly a sewerage system cannot have too many suppliers due to problems such as providing multiple sewer lines etc. Equally, in a very small or remote area we cannot have several supermarkets competing for a few customers. Then we also have legally created monopolies by way of intellectual property, generally patents and trademarks.

However in the bigger scheme of things governments are mindful of the dangers that monopolies can pose to the economic well fare of a country. They put in place monitoring and regulating bodies such as fair trading and competition commissions.

A few years back the giant Microsoft Corporation was ordered to de-merge their Microsoft Internet explorer from the Microsoft Windows products as it was considered a monopoly activity. It is noteworthy that in this case the customers had other options. There were other products in the market and the customers were not compelled to buy Microsoft products. Yet the authorities broke up the behemoth Microsoft on the basis of anti-competition laws and it is said the loss to the company was something like US$ 70 billion!

We also have the example of the iconic AT and T of the USA which was broken into smaller entities popularly called baby bells sometime in 1982 again due to anti-trust litigation.

Certain shopping centres in the developed countries now even have restrictions on the number of shops that one company may have in a geographic area.

In Sri Lanka we live in ignorant bliss about issues such as monopolies. Even a casual glance at some of our economic activity will reveal a worrying degree of monopoly activity both horizontal as well as vertical. We have for example only two large supermarket chains in the country. Between the two they probably command about 50-70% of the supermarket consumers. Some of these supermarkets also have their own supply chains in the form of farms and manufacturers feeding the supermarkets.

Usually on Sundays I used to enjoy a packet of lamprais at a popular fast food chain. They were selling a packet at Rs. 330. This Sunday I was astonished to discover that it had been raised to Rs. 400, a 20% plus jump in the price! As we know nothing happened in recent times in the local economy to justify such a jump. Of course this food chain is not a monopoly and it is not essential for a person to have a lamprais for lunch. But in a case of a monopoly in a vital area the consumer will have nowhere to turn. Predatory pricing and shoddy quality may well become his daily reality.

(The writer is an attorney-at-law)
https://www.ft.lk/Columnists/monopoly-building-in-sri-lanka/4-151309

The Import and Export Control Department has issued a statement suspending an order issued by a Gazette Notification by Prime Minister Mahinda Rajapaksa, in his capacity as the Minister of Finance.

It is reported that the statement was issued under the influence of Secretary to the President, Dr. P.B. Jayasundera, which has created quite a stir in local political circles.

Reports circulating on social media say that the President's Secretary was influenced by the pressure exerted by business magnate Dhammika Perera. 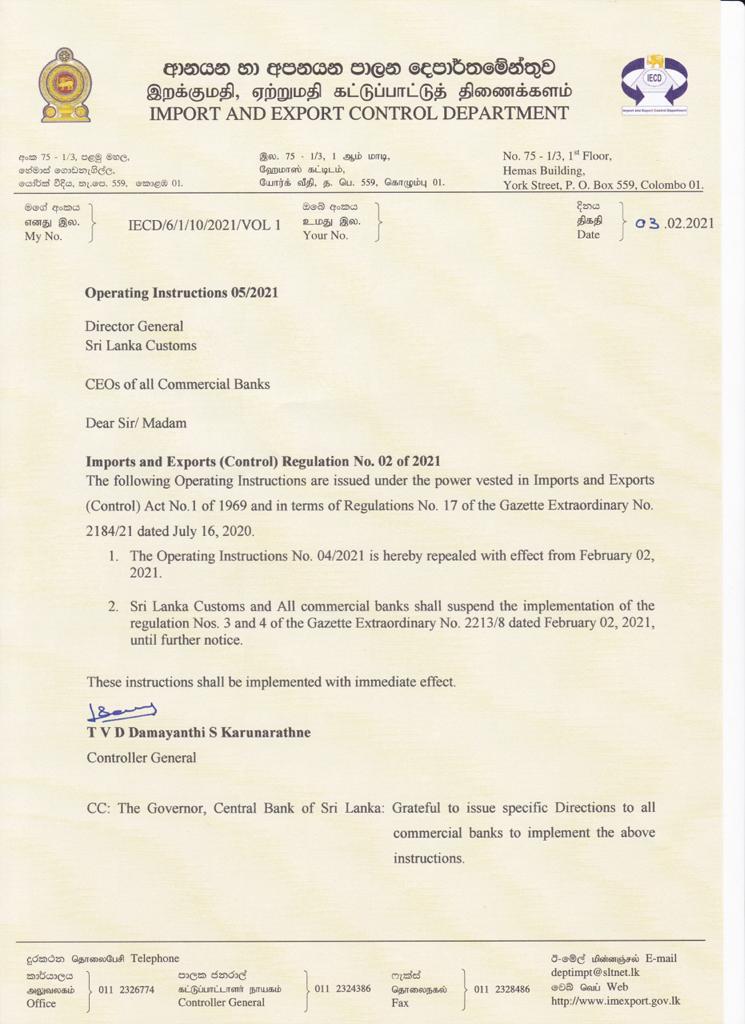 Prime Minister Mahinda Rajapaksa, in his capacity as the Minister of Finance, issued a Gazette Notification on Tuesday (02) relaxing the import restrictions imposed on tiles and ceramicware.

The Controller General of the Import and Export Control Department, Damayanthi S. Karunarathne, yesterday (3), issued new operating instructions to Customs and commercial banks, to suspend the implementation of a Gazette permitting the importation of tile and ceramicware. 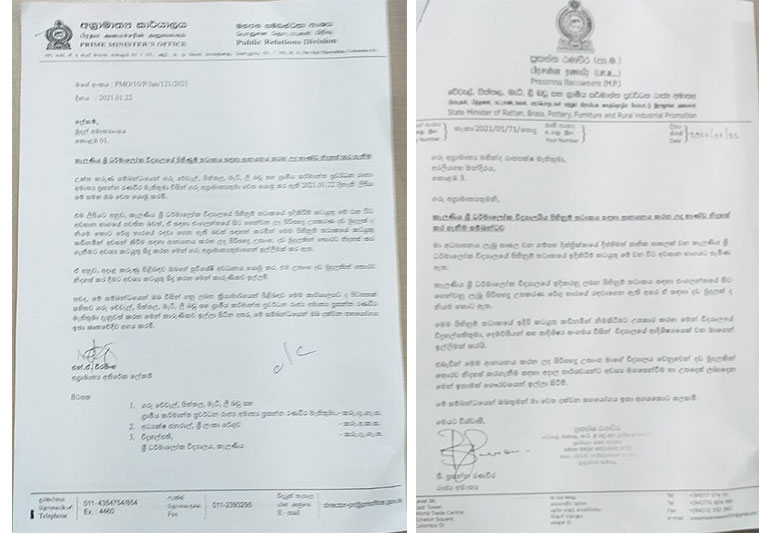 Accordingly, operating instructions were issued to Sri Lanka Customs and all commercial banks to suspend the implementation of the regulation Nos. 3 and 4 of the Gazette Extraordinary No. 2213/8 dated February 02, 2021, until further notice.

Meanwhile, it is reported that a consignment of tiles that was imported for the construction of a swimming pool at the Sri Dharmaloka College in Kelaniya has been held by the Customs Department. Since this has stopped the school from constructing the swimming pool, a past pupil had written to Prime Minister Mahinda Rajapksa seeking redress a few days ago.

Accordingly, on January 22, the Additional Secretary to the Prime Minister, N.A. Weerasinghe had written to the Secretary of the Finance Ministry of Finance asking him to inquire into the matter and take appropriate action.

A senior official of the Ministry of Finance said that the Prime Minister's decision to revise the import restriction policy on tiles and ceramicware was due to the discovery of many underlying issues of the import ban.

Although the government decided to restrict imports of tiles and ceramicware with the objective of raising the standard of local industries, many local businessmen have said that a number of problems have arisen as a result.

They said that many businesses engaged in the sale of tiles and ceramicware had come to a standstill and that thousands of employees have been deprived of an income. They also noted that local manufacturers face severe hardships in obtaining raw materials for the manufacture of tiles.

The Prime Minister has also been informed that nearly 100 containers of tiles that had been imported before the import restrictions were imposed, have been held up at the Customs Department forcing entrepreneurs to incur substantial amounts in warehousing costs.

It has been brought to the notice of the Prime Minister that due to the import ban imposed on tiles and ceramicware, a few select businessmen like Dhammika Perera who have a monopoly in the local tile industry, have amassed huge profits as a result. Therefore, the Prime Minister had instructed to relax the import restrictions, the senior finance ministry official said.

It is reported that the stocks of Dhamikka Perera controlled tile and ceramicware companies in the Colombo Stock Exchange had decreased after the gazette notification issued by the Prime Minister. However, with the announcement by the Controller General of the Import and Export Control Department, stocks of his companies have increased again, it is reported.