» Expolanka to continue its winning streak
by samaritan Yesterday at 10:22 am 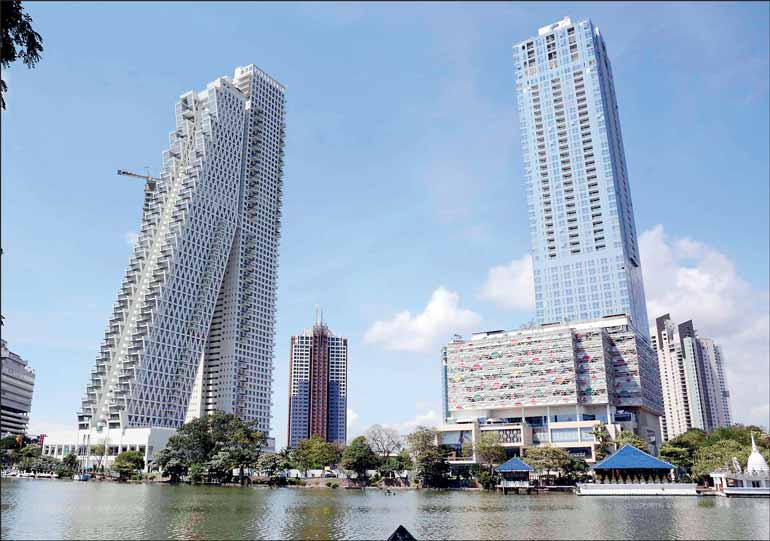 Sri Lanka’s condominium industry has not only held up the real estate sector but shored up the country’s economy as well amid a double crisis. A recent Cabinet decision (30 May) to abolish the concessional property exemption from the value added tax levied on condominium property could spell disaster for the industry and the economy as a whole.

Since 1950, successive governments have acknowledged that the best way to use residential lands more efficiently was to use the condominium property. The Torrington Housing Scheme in Colombo was the first, and was introduced in 1950. 112 houses (about 11.5 perches per house) were built on 8 acres of land, and in 1950 you needed only Rs. 4.75 to exchange one dollar. In those days there was no connection between condominium real estate construction and foreign exchange, the value of the dollar, or foreign reserves. There was no need to focus on such a relationship.

But as the dollar gradually appreciated against the rupee, condominium properties were identified as a means of maintaining the value of the rupee; to maintain foreign reserves, and earn foreign exchange. The condominium real estate industry in Sri Lanka was recognised as an alternative that could be used not only to meet the housing needs of the people of the country but also as a source of foreign exchange earnings.

This is illustrated by the fact that the Land (Restrictions on Alienation) Act No. 38 of 2014, which prohibits foreigners from purchasing land in the country, yet allows foreigners to purchase units above the 4th floor of a condominium property. Land (Restrictions on Alienation) (Amendment) Act No. 21 of 2018 erased the words “units above the 4th floor” and allowed “any unit on any floor”, further confirming the condominium’s targeting of foreigners. Attempts to attract foreigners by removing even the 100% tax levied on the disposal of property to foreigners some time ago shows that the condominium property was recognised by the Government as a way to earn foreign exchange. This is further confirmed by a careful study of the conditions imposed on foreigners for the purchase of condominium property. That is; “Provided that, the entire value shall be paid upfront through an inward foreign remittance prior to the execution of the relevant deed of transfer” – Section 3 (1) b of the Land Disposal Restriction Act No. 38 of 2014.

The Ministry of Justice has also decided to update the existing laws in the country and update the Condominium Property Law in an effort to make it more relevant today. It is proposed to make a number of modern changes, including the introduction of new provisions on Mixed Condominium Developments. This is further evidence of the policy of the Government to elevate the condominium property to an important role in the country’s economy by making changes to suit the new conditions.

The most recent evidence is that the authorities sought to rely on condominium property in the face of the current financial crisis. The Cabinet decided on 25 April 2022 to grant residency visas of 5 to 10 years to foreigners who invest at least $ 75,000 or more to purchase condominium properties in Sri Lanka. The decision was as shown in Figure 1.

The condominium industry, which maintains such a close relationship with the country’s economy, is also facing a crisis situation with skyrocketing prices of construction materials and their scarcity. In such a scenario, the decision to re-tax the condominium industry is counterproductive and should be reconsidered.

On 30 May, the Cabinet decided to abolish the concessional property exemption from the value-added tax levied on condominium property. If for some reason the condominium industry was exempted from that value-added tax by previous governments, today there is very much more justification for the exemption. Just over a month ago (25.04.2022), the Government decided that the condominium property should be used for sale to earn foreign exchange.  However, instead of looking at the difficulties facing the industry and trying to alleviate them and trying to find a solution to the economic crisis based on condominium properties, the decision to remove even the existing tax concessions is paradoxical. The authorities need to think deeply about the dangers that decision could bring to the condominium industry and to the country’s economy. The shortage of construction materials due to the foreign exchange crisis has resulted in prices shooting through the roof. The economic crisis faced by the country is creating a very difficult situation for the industry as prices of all inputs have escalated.

Operational costs are increasing in tandem. If the industry is forced to cut back, one of the first results would be job losses for the over one million workforce, forcing more than ten million people towards hunger and deprivation. It need hardly be said that it would have a domino effect on the economy.

The condominium industry is not asking for tax concessions or other benefits. Even though the Port City investors have been granted a 40-year tax concession, that is not what is requested by the Condominium Property Developers Association of Sri Lanka. Their earnest request to the Government is not to add further burdens on the industry with crippling taxes.

(The writer works at the Condominium Property Developers Association of Sri Lanka.)