The Covid-19 pandemic and the Ukraine war have affected economies all over the world, with developing economies taking the largest hit. Sri Lanka was no exception and went into 2020 with a large debt burden and large debt servicing commitments. Policy changes to reduce tax rates and increase money printing in the hope that the excess liquidity would fuel the economy did not materialize. And the pandemic added to the woes by significantly reducing tourism arrivals and foreign remittances, effectively drying up the forex reserves.

Fast forward two years, the Central Bank of Sri Lanka (CBSL) made several policy decisions that would significantly affect the outlook of the country’s economy.

• The Sri Lankan Rupee - LKR was allowed to float (it was previously on a soft peg to the USD). The LKR had since depreciated by over 75% within a period of two months.
• Policy rates were increased by 700 bps to 13.5% (SDFR) and 14.5% (SLFR) respectively.
• Treasury bill rates in the Primary auction increased sharply, rising by ~1200 bps over a period of one month,
and are now however gradually inching down with the 3-month rate being 20.73% at the last auction.
• Sri Lanka announced a suspension of external debt repayment resulting in downgrades by all three
international rating agencies. (Sri Lanka Development Bonds were excluded from this suspension)
• Sri Lanka sought to receive assistance from the IMF, and are in the final stages of discussion. Technical and
legal advisors were appointed to restructure external debt.
• The government revised Value Added Tax (VAT) and other tax rates upwards, in a bid to increase
government revenue.
• Import restrictions on 369 items of which imports have been regulated have been relaxed.

The exorbitantly high exchange rate and the unavailability of forex with usable forex reserves down to USD 50 mn (Minister of Finance, 04th May 2022) has resulted in a severe increase in the unavailability of basic necessities like fuel, gas, certain food items, and medicines, with long queues for essentials becoming very common.

The economy grew by 3.6% in CY21, compared to the 3.6% decline in CY20. The industries sector recorded an annual growth of 1.75% a turnaround from the previous year when it was severely affected by lockdowns and supply pressures. The services sector too recorded a growth of 1.3%, which too is a turnaround from the effects of the lockdowns of the previous year. The revival of both the domestic and foreign hospitality sectors two contributed significantly to this. The agricultural sector however was impacted negatively by the ban on chemical fertilizer and declined by 0.04%.

While official statistics for the performance of the real economy in the year 2022 have not been released yet, shortage of fuel, power interruptions, difficulties in sourcing raw materials, and escalating raw material prices due to the LKR depreciation have affected all three sectors of the economy. Fuel and power issues will have to be sorted out before the real economy can achieve some form of stability this year. As there is not sufficient clarity in the way forward for the economy, and the IMF debt restructuring plans, LRA expects GDP growth to decline to about 2% in CY22. 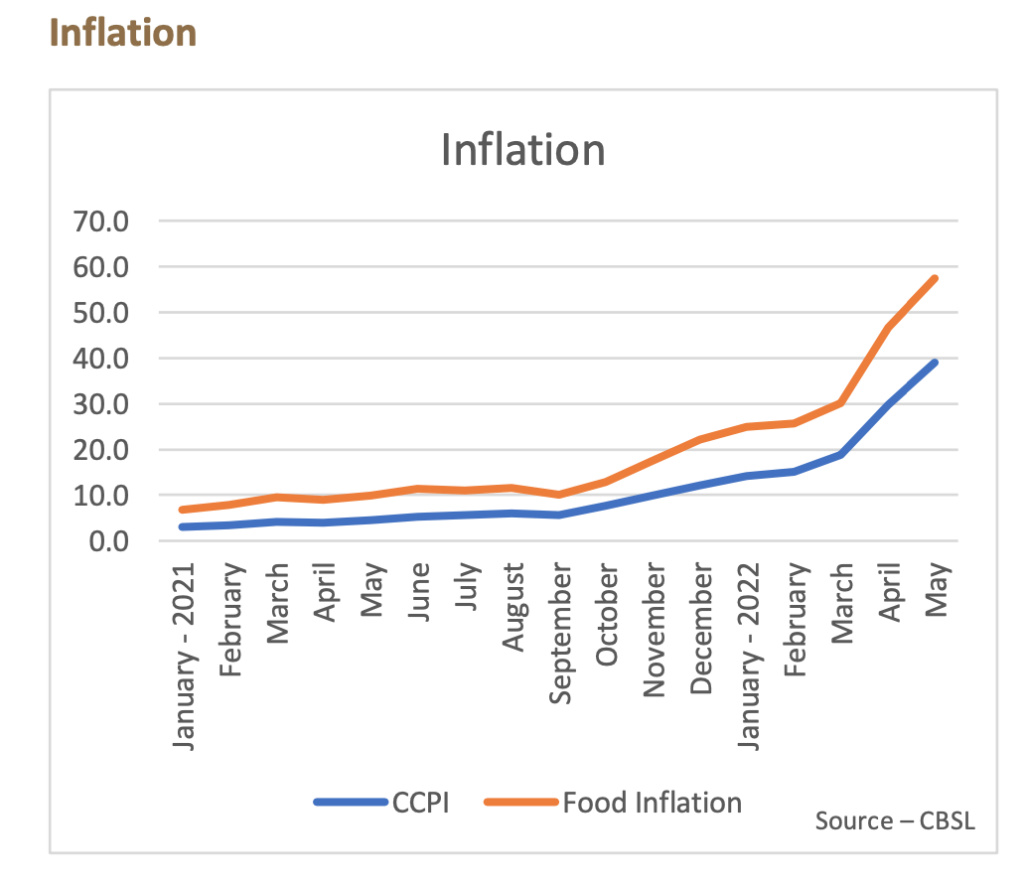 Inflation (CCPI) has been rising rapidly since September CY21, hitting double digits in December CY21. CCPI in May 2022 was 39.1%. Food inflation has increased up to 57.4% and this has severely affected the general population.
Inflation woes are expected to continue due to high prices of fuel and other vital imports due to the foreign exchange limitations, supply chain issues, and the depreciating LKR. The high inflation is expected to continue to mid-CY22 after which it would reduce since the base would be high. The increased interest rates are expected to curb demand, however, it will not be able to resolve supply chain issues.

One of the main reasons for the economic woes the country is facing at this moment is due the reduction in government revenue which was a direct result of reducing tax rates in late CY19.

Tax revenue as a % of GDP has declined somewhat in CY16 and CY18, however since CY19, the decline is significant. 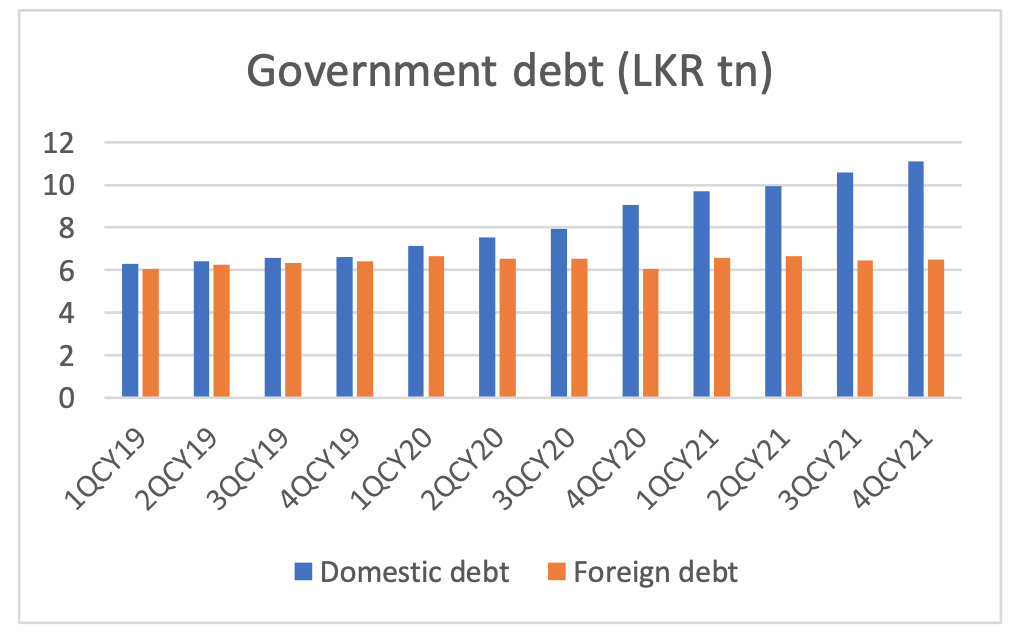 The fiscal deficit was financed largely through domestic debt. This resulted in total government debt increasing by 16.4% in CY21 compared to end CY20.
The forex crisis has pushed the government to request credit facilities and multilateral and bilateral loans in CY22, which will result in a further increase of the loan stock of the country.

While the depreciating LKR is expected to help exporters, the Sri Lankan export industry is heavily dependent on imported raw materials, and hence supply shocks are affecting this sector too. The apparel manufacturing industry, the largest exporter in the country is already facing this and losing to competition due to being unable to meet orders. 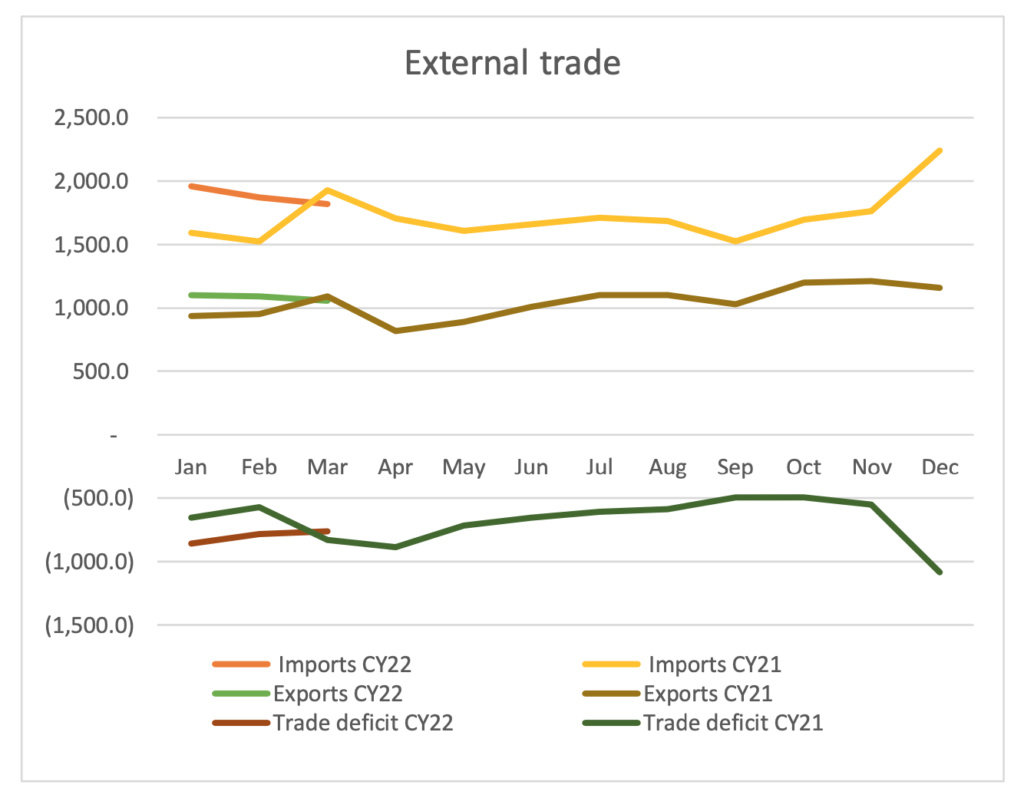 Merchandise imports too have increased in the first three months of CY22 to USD 5.7bn, a 12.1% increase from the USD 5.0bn recorded in the same period in CY20.

The trade deficit widened by 16.7% in the first three months of CY22 and is expected to widen further due to global supply issues fuelled by the Russia- Ukraine crisis, increasing prices due to global inflation, and the negative effects experienced by the domestic exporters as outlined above. The widening trade deficit would put further pressure on the current account and the forex reserves giving rise to a vicious cycle. Imports done on trade credit could reduce the trade gap, but would add to the government’s foreign currency debt burden.

Sri Lanka will be relying heavily on credit lines given by friendly nations to purchase its essentials. A USD 1bn credit line was received from India which is almost exhaust and the government is in the process of requesting further credit of USD 1bn each from India and China, to get through the next few months.

Workers’ remittances have been very limited in January and February 2022, but are expected to have increased slightly after the LKR was floated.
Tourist arrivals saw an improvement during the winter months, however, the recent crisis faced by the country has seemed to have discouraged some travellers since the arrivals have reduced in May 2022 to 30k after a high of 106k in March. Certain governments have also issued travel advisories to their citizens against non-essential travel.

The outlook for Sri Lanka
The outlook of the economy looks quite bleak at this stage, and a lot would depend on how soon negotiations with the IMF will be finalized, and how effective measures taken by the CBSL and the government to revive the economy will be.

Supply issues are expected to amplify in the near future with a global food crisis being eminent. The war in Ukraine has affected the supply of many food items, and high inflation the world over has increased the prices of many essentials.

Small businesses which were affected badly by Covid-19-related lockdowns are the largest hit this time around too. Many restaurants have had to close down due to the unavailability of cooking gas, and many other small businesses have been affected by power interruptions and the unavailability of fuel to run generators. Taxi drivers and food delivery partners have also had their revenues reduced drastically.

This is expected to increase the short-term NPLs of both the banking sector and leasing and finance companies. Credit to the private sector too would be tightened further.

Revival of the tourism industry and an increase in workers’ remittances are required in order to stabilize the current account. Tourism inflows will depend on maintaining a conducive environment for tourists.

Other measures that the government is taking to resolve the foreign exchange crisis include the sale of under- utilized assets and the privatization of certain state-owned companies. One of the first such state-owned companies that are expected to be privatized is Sri Lankan Airlines which has been running on losses since the contract with Emirates was terminated.

Discussions with the IMF on a potential loan program are underway and are expected to conclude successfully in the next few weeks.

Japan has provided USD 1.5mn as aid to be used in purchasing medicines and further aid is expected from Japan in the near future. India has provided yet another credit line for the purchase of fuel.

Negotiations with IMF are proceeding and a debt restructuring team has been appointed. However, the successful restructuring of Sri Lanka’s external loans will take months. A new revenue generating budget is expected to be released in June.

The reduction in government revenue, and the need to depend on credit lines and loans from the international community, has increased the government debt, and with GDP too declining this would significantly increase the debt to GDP ratio.