Land with an extent of 100 acres in Colombo adjacent to the British School of Colombo has been unduly utilised by 400 members of a private club depriving economic benefit to the country. It is called a Royal Colombo Golf Club where 400 members use to keep themselves fit.

This property has been leased to the to this club by the government with a very low lease rental under the pretext of as waste water land.

Sri lanka’s economic crisis can be resolved by selling or leasing this land to a foreign investor.

Government officials are currently probing this matter and expected to carryout a detail investigation in relation to the affairs of this private club. 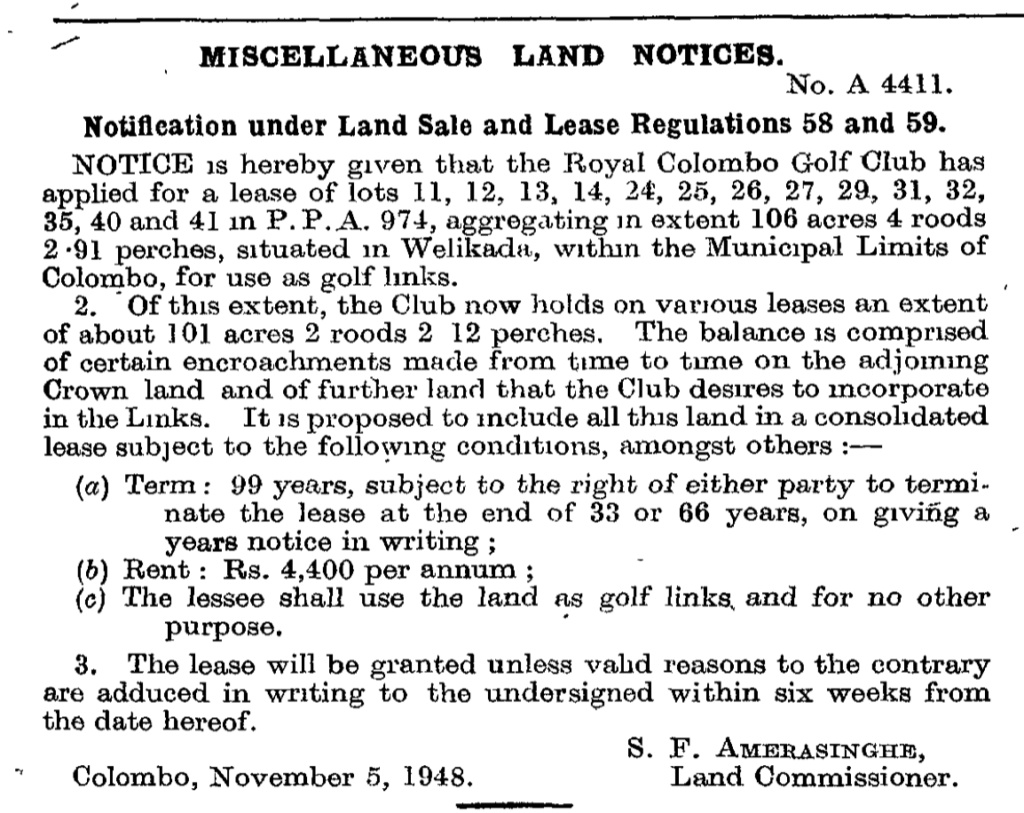 Its sad that government is earning such a low rental for this valuable property.

Why sell Port City?
Government can easily lease this prime property to a foreign investor and raise US$ 1bn instead of using it for unworthy cause.

With this government can buy Gas and fuel for next 1 year!!

Posts : 247
Equity Stars : 1831
Reputation : 4
Join date : 2019-03-23
Below is an article published relating Water Edge property which was taken over by the government despite many resistance. Government is currently planning find investors for the Waters Edge Property along with the 80 Club and the Otters club under the Selandiva Project. I think under utilised properties like 100 Acres at Colombo Golf club also should be offered to potential investors.

The Supreme Court asked lawyers appearing in the Fundamental Rights petition filed by two retired public servants complaining against what they call an illegal and corrupt land transaction during the tenure of former President Chandrika Kumaratunga to file their written submissions next month after two day's of arguments this week.

The two former public servants, Sugathapala Medis of Panadura and Raja Milroy Blasius Senanayake of Colombo, say former President Kumaratunga introduced a Cabinet Paper during her Presidency and obtained BOI (Board of Investment) approval to grant 118 acres of State land near the Parliament Complex at Battaramulla to a private party and that this was an illegal act. Furthermore, they say that a close family friend of Ms. Kumaratunga, Ronnie Peiris, a businessman residing in the United Kingdom benefited to the tune of Rs. 60 million from this transaction.

During the proceedings, Chief Justice Sarath N. Silva who presided over the three-member bench made some strong remarks against the conduct of the Urban Development Authority (UDA) which alienated this extent of land on the instructions of the Cabinet following then President Kumaratunga's proposal.

The Chief Justice said that whatever the faults of former Presidents J .R. Jayewardene and R. Premadasa, they had a vision for the upliftment of the poor. He said President Premadasa in a capitalist regime did not utilize public lands for capitalist purposes and instead built housing schemes like Sanchiarachchiwatta.

But, Ms Kumaratunga, in a socialist regime built a luxury golf club and if she had said that at the 1994 election campaign, no one would have voted for her government, the Chief Justice observed.

Justice Shirani Thillakawardene and Justice P.A. Ratnayake were the other members on the bench hearing the petition.

Attorney J.C. Weliamuna appearing for the petitioners told Court that the entire transaction to lease out the land extending to 224 acres began with former President Ms. Kumaratunga submitting a cabinet paper for a project with Japanese national J. Yanagihara as its foreign investor and Mr. and Mrs. Selvaratnam and Shantha Wijesinghe as local investors. 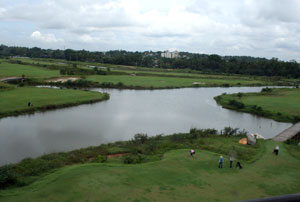 The golf course in the centre of the legal battle

He stated that during the negotiations the respective Provincial council was not consulted as should be the procedure. He said Mr. Peiris who was known to Ms. Kumaratunga, was a facilitator who negotiated the deal with Asia Pacific Golf Course Ltd and had received a payment amounting to Rs 60 million as commission.

Mr. Weliamuna said Mr. Peiris was to be arrested by the Inland Revenue Department in respect of this transaction which should be investigated by the Bribery and Corruption Commission.

President’s Counsel Faiz Musthapha appearing on behalf of eight ejected residents appearing as intervenient petitioners said there was no public interest at all in this transaction. Although the land was acquired for the expansion of the parliamentary administration complex and for a flood retention project, it was given to a private party for a golf course. “There was no public element in it,” he said.

“It was calculated to assist the fourth respondent company, viz Asia Pacific Golf Courses Ltd. on the face of the cabinet memorandum. There was a discount of Rs. 90 million -- a drop of nearly one third and it is contrary to the valuation of the Government Valuer, who valued it as a single entity,” Mr. Musthapha claimed.

“This licence is unknown to the law. They have being notorially executed and the land had being given on a 99-year lease,” he said.

“The cabinet departed from the original project and authorized the order to sell blocks. This is a new purpose as the original assignment of the land was for the golf course. The land was sold by the UDA at Rs. 26,000 a perch to the developer who in turn sold blocks without any building construction for Rs. 5 million a block. The UDA has been a land sales agent,” he said . President’s Counsel D. S. Wijesinghe for Asia Pacific Golf Courses Ltd., the 4th respondent, in his submissions stated that the Asia Pacific Golf Course was a corporate individual and that it should not be penalized for an act committed by another individual. He said the Court should take note whether the shareholders of the company received this land unlawfully and that the court should penalize the people who were responsible -- and not the Asia Pacific Golf Course. President's Counsel Romesh de Silva appearing for the sixth respondent, Sumal Perera, the present Chairman of Asia Pacific Golf Courses Ltd., in his submissions said that the 6th respondent went into this venture after he had obtained all relevant documents from the authorities concerned and that there was no unlawful act committed.

He said the company had, abiding by the terms and conditions stipulated by the UDA, taken steps to preserve the water retention purpose at a cost of Rs. 295 million.

He said the Court should consider that the 6th respondent was not responsible for any unlawful act and should not be penalized. He said the shareholders had invested around Rs. 2,500 million in the project and that they should be compensated if any of the transactions facilitated by the 1st Respondent (former President Kumaratunga) was found to be unlawful. He said that this project was done bona fide.
The Chief Justice observed that the company had in fact obtained documents which granted approval for an 18-hole Golf Course and not for a land sale. He said that if the company was to claim any compensation, it should claim it from the people who sold it through the Shareholders Agreement.
Justice Thillakawardene said nothing legal could come out of an illegal act, and that the State could not be made to suffer twice over by being asked to pay compensation as well.

Attorney Nihal Jayawardena for the UDA said that after the Waters Edge project started the land value in the surrounding area had appreciated.

The Chief Justice observed that this should not be the motive and the intention of the UDA , and said that again, the UDA was suggesting that poor people should be made to move out of these areas when land values rise and only the rich have access to such properties.

“The purpose of the UDA is to facilitate public interest and not the interests of individuals,” he said. “The basic function of the UDA in allocating the land was to build a park, and a public playground for the benefit of the public whereas it has been used to facilitate a private members only club,” the Chief Justice said. The UDA had acted so badly, it should be "dissolved", the Chief Justice said.
President's Counsel Mohan Pieris appearing for the BOI said the Cabinet granted approval for special developments projects to seven BOI projects and approval was granted on the basis that the persons who received the approval should be the investors.

Senior State Counsel Nerin Pulle appearing for the Commissioner General of the Inland Revenue Department said the tax file pertaining to Ronnie Peiris where he admits to collecting Rs. 60 million for this transaction as part of his commission, could be submitted to Court should the Supreme Court direct the Commissioner general to do so.

In their petition, Mr. Medis and Mr. Senanayake say that the former President Chnadrika Bandaranaike Kumaratunga is guilty of abuse of power and of corruption, and ask, inter-alia, that those who made illegal monies from this transaction, viz., Mr. Ronnie Peiris, Asia Pacific Golf Courses Ltd., Mr. Siva and Mrs. Suweneetha Gressel Selvaratnam of No. 6/2, Cambridge Place, Colombo 7 and Mr. Shantha Elroy Godwin Wijesinghe of No. 9, 1st Lane Baddegana Road, Pitta Kotte return the monies to the State. The Supreme Court directed all counsel appearing for the respondents to submit written submissions within two weeks and the case to be mentioned on July 7.

Land with an extent of 100 acres in Colombo adjacent to the British School of Colombo has been unduly utilised by 400 members of a private club depriving economic benefit to the country. It is called a Royal Colombo Golf Club where 400 members use to keep themselves fit.

This property has been leased to the to this club by the government with a very low lease rental under the pretext of as waste water land.

Sri lanka’s economic crisis can be resolved by selling or leasing this land to a foreign investor.

Government officials are currently probing this matter and expected to carryout a detail investigation in relation to the affairs of this private club. 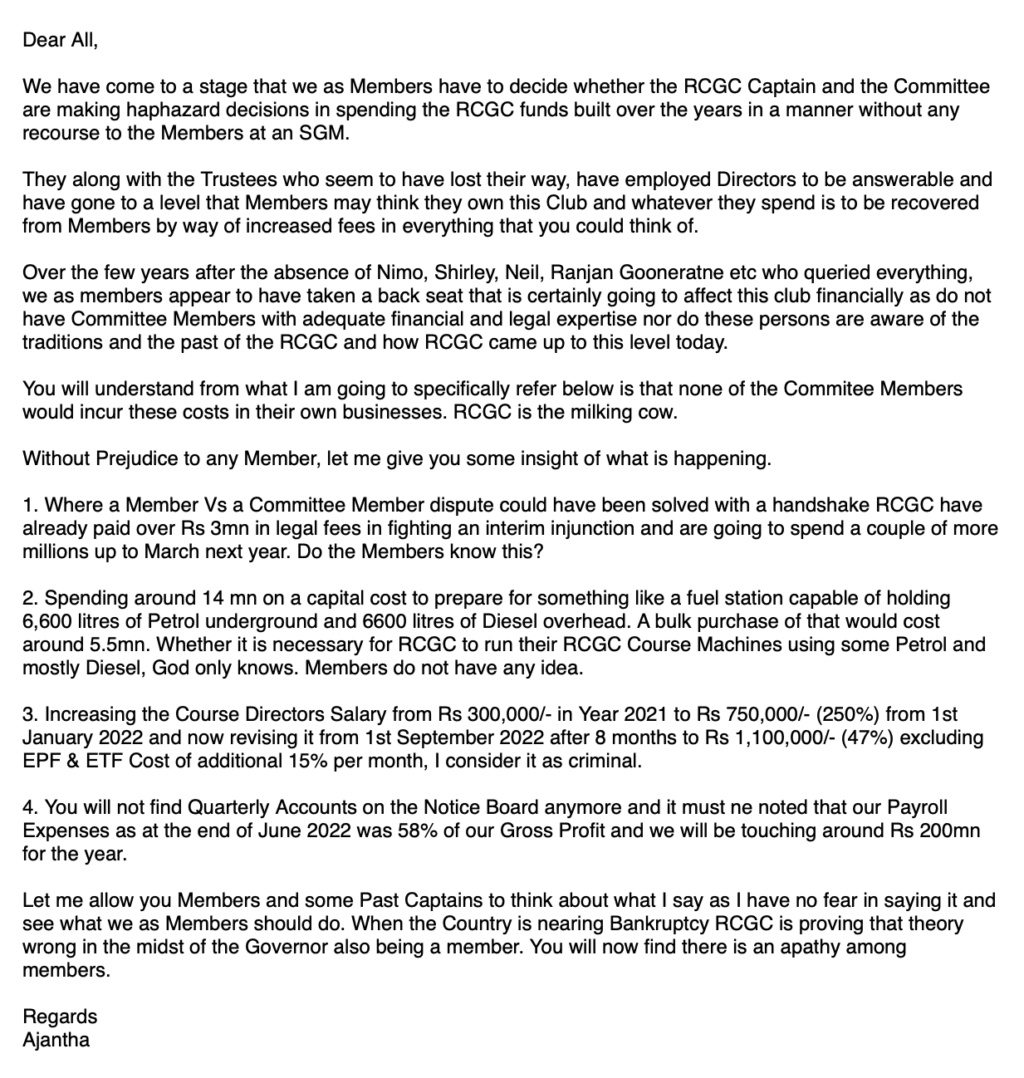