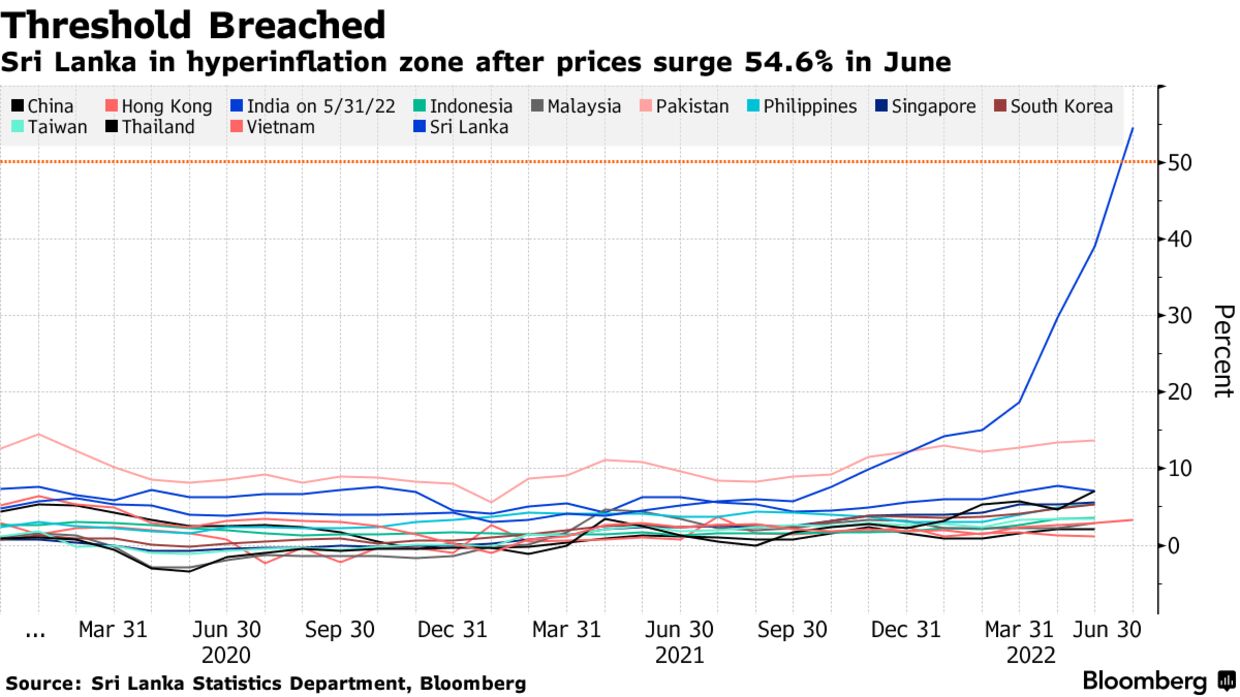 Sri Lanka’s consumer prices continued their record ascent in June, with the headline rate breaching hyperinflation levels on a persistent shortage of essentials from food to fuel due to the country’s depleted foreign exchange reserves.

Official data on Thursday showed consumer prices in capital Colombo rose 54.6% from a year earlier, beating predictions for a 43.7% gain in a Bloomberg survey of economists. That pushes the key price gauge past the 50% level that most economists commonly use to define hyperinflation.

Sri Lanka in hyperinflation zone after prices surge 54.6% in June

The figures are the final price print before the Central Bank of Sri Lanka’s next interest-rate decision on July 7. While the monetary authority left borrowing costs unchanged in May, policy makers may be forced to resume tightening to arrest runaway inflation.

The country’s benchmark stock index was down 0.3% after the data, while the rupee was little changed.

“We would have reached a hyperinflation-like impact already, although official numbers are only now catching up,” said Kavinda Perera, head of research at Asia Securities in Colombo. “There is still room for prices to increase further, with electricity tariff hikes on the cards,” he said, noting that there’s no monetary policy solution to supply-driven problems like energy prices.

Sri Lanka, which is in the midst of its worst economic crisis, this week restricted fuel supplies and told residents to stay home until July 10 to dampen demand. The move comes after Prime Minister Ranil Wickremesinghe last week said that the nation was unable to source fuel even for cash, as suppliers insist on clearance of past dues.

Separately on Thursday, the International Monetary Fund said it’s made significant progress toward an aid program for the crisis-ridden nation. The help is contingent on Sri Lanka fulfilling conditions including steps to ensure debt sustainability and curtailing inflation.