Five graphs that explain how Sri Lanka ran out of money

Five graphs that explain how Sri Lanka ran out of money

Sri Lanka is facing its worst economic crisis in modern history. Its 22 million strong population is struggling with huge price increases for food, power, medicines and other necessities. That’s if they can get them at all, with private motorists spending hours queuing for their fuel quota.

This is why Sri Lankans have been protesting on the streets and stormed the President’s House.

How did it come to this?

The immediate cause of the crisis is straightforward: Sri Lanka ran out of foreign reserves, the currencies its government and citizens need to pay for imports.

How it got into this situation requires more explanation. It’s a story of fiscal imprudence, unsustainable exchange rate policy and chronic mismanagement.

This is reflected in the steady decline in official foreign reserves held by the Central Bank of Sri Lanka, falling from about US$8 billion to less than $U2 billion. (The Sri Lankan currency is “closed”, meaning it isn’t traded outside the country, so foreign exchange transactions have to go through the central bank). 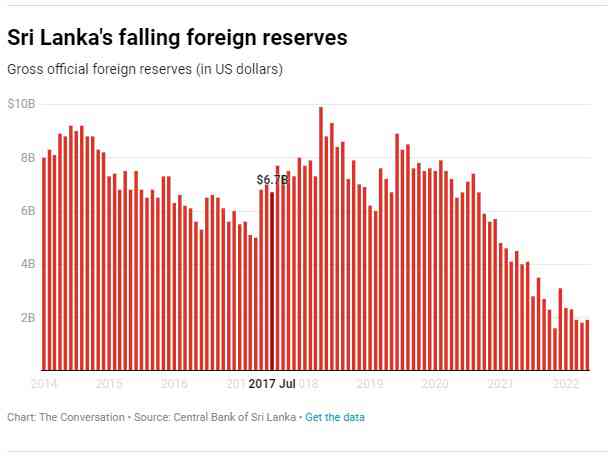 As bad these figures are, the reality is worse.

Gross reserves aren’t the same as money in a bank account that can be used for payments. They include, for example, currency already committed to payments, and loans with conditions that limit imports from certain countries.

The actual amount of “usable” foreign currency is less. By early May it was barely US$50 million – a miniscule level for an economy that by the end of 2021 needed about US$75 million a day to pay for imports. This led to Sri Lanka’s government defaulting on a US$78 million interest payment in late May.

In two years Sri Lanka’s annual trade deficit has climbed from about US$6 billion to US$8 billion.

At their peak, they more than offset the trade deficit for goods.

But since 2019 the value of remittances has fallen more than 20%. Income from tourism, devastated by the 2019 Easter bombings in which 269 were killed, has dropped almost 90% from its 2018 peak. Propping up the exchange rate
Ordinarily a nation can avoid running out of foreign currency in two ways.

One way is to borrow money. Sri Lanka, however, was already heavily in debt before this crisis. Successive governments borrowed to finance infrastructure projects and prop up loss-making public utilities. With estimated annual debt service costs of US$10 billion, Sri Lanka is now a bad bet for lenders.

The second, and better, way is a floating exchange rate along the lines of those in Australia, Britain, Japan and the United States.

A floating rate helps to balance trade value because the currency’s value changes according to demand.

A government can do a number of things to maintain the value its currencies, but the main way is buy the currency itself, using foreign reserves. This is what Sri Lanka’s central bank did.

As foreign reserves ran down, the government adopted other riskier policies. Particularly disastrous was the April 2021 decision to ban fertiliser imports.

This was marketed as a policy to promote organic farming, but really it was about cutting demand for foreign currency.

The subsequent drop in agricultural production has only compounded the economic crisis.

Allowing the (pegged) rupee to depreciate more than 40% against the US dollar has pushed up inflation to 54%. 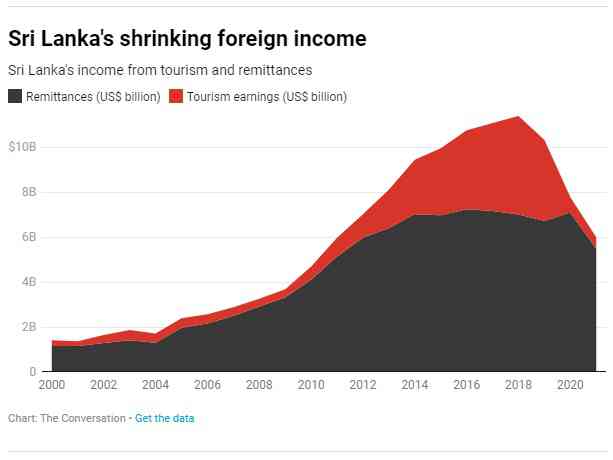 The help the Sri Lankan government is seeking from the International Monetary Fund is likely to hit people hard, at least initially.

Based on past experience, the IMF will want major commitments on government expenditure and other economic indicators before bailing out Sri Lanka.

But without action, life in Sri Lanka looks even more grim. 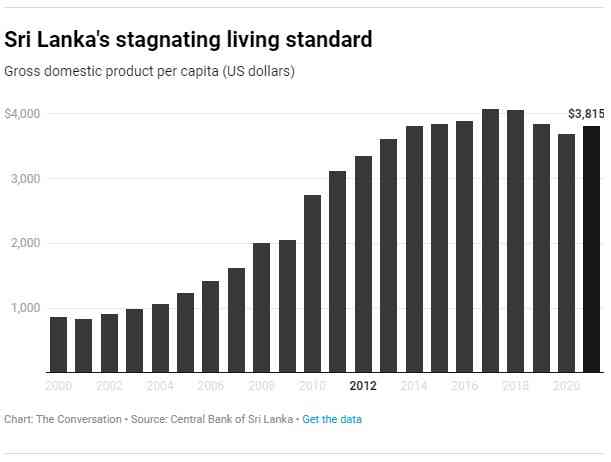 On the other hand, Sri Lanka has some natural advantages – from its natural beauty to the most literate population in South Asia. What it needs now is principled political leadership, competent economic management and the right policies.

This article first appeared on The Conversation.