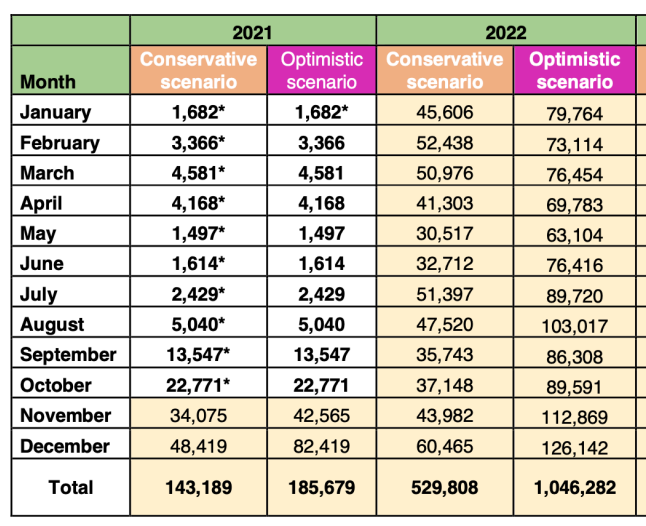 Sri Lanka witnessed its lowest monthly tourist arrivals in September, with the number of international visitors entering recorded at 29,802.

The arrivals for the month are even lower than that of May, which saw 30,207 tourists entering the country.

In May, the political and economic crisis in the country escalated, severely crippling the tourism sector that was well on its way towards revival from the impact of the COVID-19 pandemic.

The low rate of tourist arrivals in September brings the total number of visitors that entered the country from January 01 to September 30 to 526,232. The weekly tourist arrival averaged 7,450, whereas the daily arrivals averaged 993 for the month of September.

India, the UK and Australia emerged as the top three source markets in September, accounting for 6,493, 2,872 and 2,309 arrivals, respectively.

For the January-September period, India, the UK and Russian Federation were the top three tourist traffic generators for the country, bringing in 86,625, 68,527 and 51,300 international visitors, respectively.

Although the recent months have seen lower tourist arrivals to the country, the industry stakeholders have expressed confidence in the numbers picking up towards the latter part of the year, leading to the winter season.

Although the travel advisories issued against the island nation, due to the political and economic crisis, too have been reversed, Sri Lanka is still to fall under the ‘green’ category of the travel traffic light system, which indicates travellers to exercise ‘normal’ precautions. Sri Lanka aims to attract a total of one million tourists and generate an income of US $ 1.7 billion for this year.

Total tourist arrivals for the year so far till end September is roughly 526,000 and generated only around 829 million US dollars in revenue.

Tourism authorities had anticipated one million arrivals generating a revenue of 1.8 billion dollars.

“As per the Sri Lanka Tourism Development Board (SLTDB) president, we are expecting another 300,000 tourists for the next three months,” Minister Fernando said speaking to reporters on Thursday October 06 at a press briefing on a tourism promotion programme in India.

“September is a low tourist arrival month for Sri Lanka. It usually picks up in mid-October and goes till January next year.

“In terms of arrivals, we are eager to get up to one million, but the target expectation is around 800-850,000 with a revenue target of around 1.7 billion US dollars,” he said.

Sri Lanka’s tourism sector, which was affected by a series of events since 2019 starting with the Easter Sunday bombings, was further disrupted due to the COVID-19 pandemic in 2020 and 2021. The sector’s woes have extended to late 2022 due to travel restrictions imposed by various countries after a period of unrest and a prevailing currency crisis, significantly impacting inbound and outbound tourism.

Official data showed that tourist numbers which exceeded more than 100,000 in March has come down to around 29,000 due to the unstable situation in the country.

“The target is a bit high, but if you aim at a higher amount you will at least end up closer to it,” said Fernando.

The minister claimed that “negative” news coverage by foreign media has impacted the image of the island, resulting in many potential inbound tourists from changing their travel plans.

Meanwhile, Suren Ediriweera, the President of the Sri Lanka Inbound Tour Operators Association said travel agents in Europe have told Sri Lanka to expect an increase in bookings in the coming months with the start of the winter season.

“For example, in Switzerland, it is starting to get cold. So our agents have told us to be ready for a boom in tourist bookings,” said Ediriweera.

“November to April is a welcome time for European travelers in Sri Lanka. Germany and Switzerland in particular have asked us to be vigilant in that regard,” he said. (Colombo/Oct06/2022)

Sri Lanka’s tourist arrivals fell by 21% in September in comparison to August suffering the lowest inflow for the year so far, dealing a fresh setback to triple-crises-hit industry’s hope for a robust revival in the upcoming winter season.

As per provisional data of Sri Lanka Tourism Development Authority (SLTDA) only 29,802 tourists arrived in September, largely due to the negative portrayal of the current situation in the country.

September arrivals fell below the previous record low of 30,207 in May, whilst placing June at the third lowest inflow with 32,856.

Despite the political and economic environment showing some improvement and less volatility than what was witnessed in May and April, industry stakeholders were disappointed with the downturn in arrivals, against the backdrop of many source markets relaxed travel advisories imposed on Sri Lanka too.

“This is mainly due to negative publicity by International Non-Government Organisations that are portraying an entirely different picture to the ground realities. These are outweighing all the positive publicity efforts by the industry,” they alleged.

However, the resilient private sector-driven industry is pinning much hope for the upcoming months following the roadshow conducted in IFTM France, India, as well as the resumption of the Russian flag carrier. Aeroflot from next Monday (10 October) and Russia’s largest charter airline, Azur Air from November.

However, the industry has already surpassed the 2021 full-year arrivals of 194,495 and expectations were for a quick rebound in 2022.

Sri Lanka has set a target of one million tourists with over $ 1.7 billion for the year 2022, despite multiple challenges. 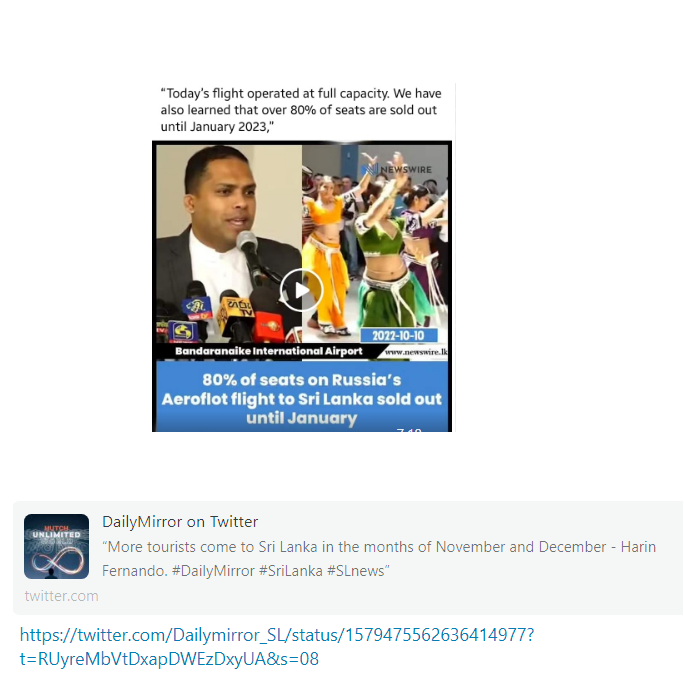 Posts : 19
Equity Stars : 797
Reputation : 0
Join date : 2020-10-13
State of tourism sector is very despondent, still hopeful there will be some rebound in next couple of months. However feedback from large operators does not sound very promising with reports of large scale cancellations. Global economy and recession in Europe is not helping. However hope that the Aeroflot will bring in some Russians.