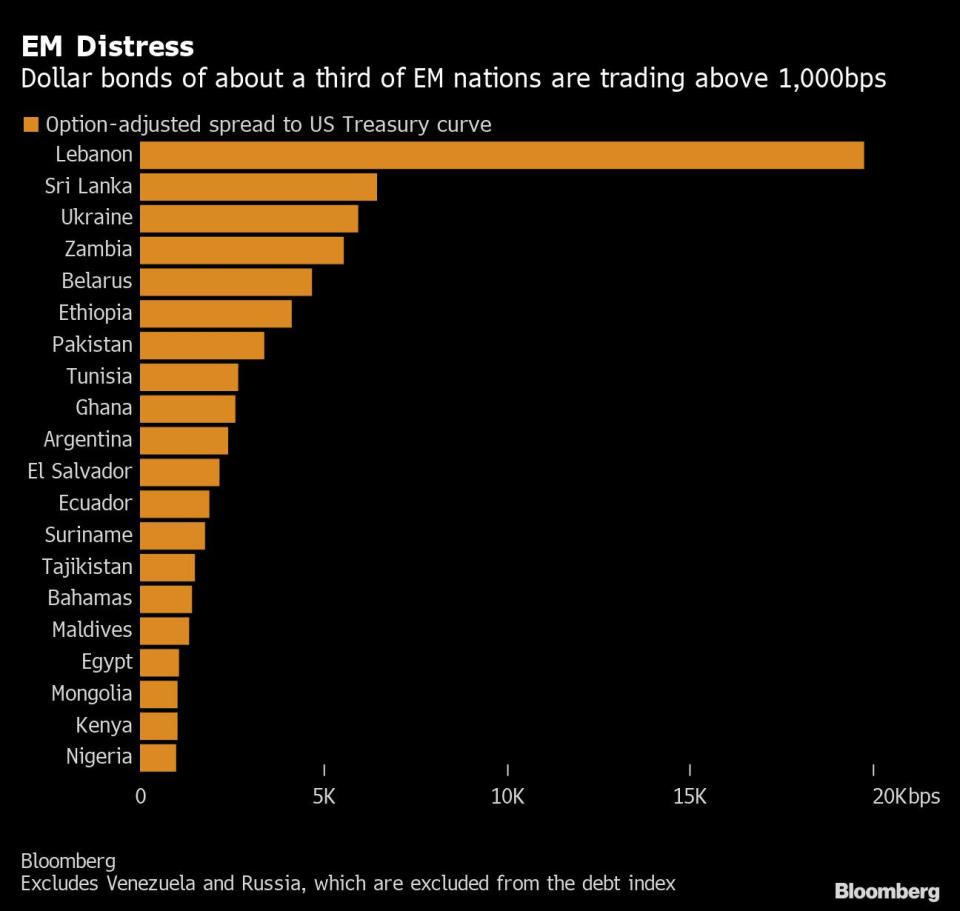 (Bloomberg) -- Emerging market governments that borrowed heavily in dollars when interest rates were low are now facing a surge in refinancing costs, evoking flashbacks to Asia’s 1990s debt crisis and stoking fears of a default wave.

Sovereign dollar bonds from a third of the countries in Bloomberg’s EM Sovereign Dollar Debt Index are trading with a spread of 1000 basis points or more over US Treasuries, a generally accepted metric of distress. Nigeria’s finance minister said this week that Africa’s biggest economy is seeking to extend the tenors of some of its debt, but added that eurobonds won’t be included in the plan.

The surge in yields is reminding investors of previous emerging debt crises, notably the one that swept Asia in 1997 when collapsing domestic currencies propelled country after country into default. And it’s forcing a painful realization that swathes of the developing world are still beset by “original sin” -- the phrase once popular with economists to describe developing nations’ reliance on foreign currency debt.

“There will be countries that will default and restructure debt,” said Lisa Chua, New York-based portfolio manager at hedge fund Man Group, whose EM debt fund has outperformed 99% of its peers this year with returns of 5%. Rising debt burdens are crowding out investment and reducing growth, “making it more challenging for many emerging markets to grow fast enough to stabilize their debt,” she said.

Debt distress is not confined to the emerging world, with swathes of corporate borrowers across developed markets also vulnerable to higher interest rates. But the fallout from a wave of defaults across developing nations could have far bigger implications for the global economy. Dollar borrowing that left countries vulnerable to exchange rate swings and Fed policy shifts, was a key force behind the 1997 Asian crises, which then swept through Russia and Latin America.

It had seemed for a while that emerging markets were absolved of original sin, as many built local bond markets and cut reliance on hard currency debt. But recent years saw a spate of sovereigns foraying overseas, lured by rock-bottom global interest rates and lacking deep domestic capital markets. That continued through 2020, the year dollar and euro borrowing by EM sovereigns and corporates hit a record $747 billion, according to data compiled by Bloomberg.

Analysts at Man Group wrote in a note published last month that the sheer size of distressed EM debt could potentially infect developed markets, with European credit being particularly vulnerable.

Mongolia, the latest entrant to the distressed list, typifies many of the problems faced by emerging markets. Investors now demand a premium of about 1200 basis points over Treasuries to hold its March 2024 dollar bond, around five times the level recorded a year ago. Surging import costs from the strong dollar have caused the Asian nation’s hard currency reserves to shrink and debt has ballooned to almost 100% of annual gross domestic product.

While the bulk of the distressed credits are small frontier markets, some larger nations such as Egypt, Nigeria and Pakistan are also on the list. Other than sanctioned Russia and Belarus, only Sri Lanka has actually defaulted in 2022. That said, fifteen of the 23 emerging-market currencies tracked by Bloomberg are down more than 10% this year, heaping pressure on governments at a time when energy bills are also rising. Developing-nation governments need to pay back or roll over about $350 billion in dollar- and euro-denominated bonds by the end of 2024, according to data compiled by Bloomberg.

Pressure on EM currencies and bonds will continue at least through mid-2023, after which dollar strength could ease, Deutsche Bank strategists led by Chief Economist Michael Spencer wrote in a note published Oct. 10. They highlight Bulgaria and Turkey among countries with more than half their debt in foreign currencies and suggest that investor losses are already big enough to qualify a crisis.

“The pertinent question, then, is whether this stress will spread to the core of the asset class – the large emerging-market sovereigns that dominate investors’ portfolios,” the Deutsche strategists wrote.

No new deals were announced in Europe’s primary market on Friday. The only offering expected to price in the region is Fedrigoni SpA’s upsized euro high-yield bond.

Banks led by Morgan Stanley are planning to sell $865 million of high-yield bonds to finance the merger of two blood plasma companies bought by Permira Holdings earlier this year, according to people with knowledge of the matter

Nigeria’s Eurobond holders will not be included in a plan to extend the tenors of its outstanding debts and not necessarily “restructure” its obligations, the West African nation’s finance minister said

KKR & Co., the pioneer of buyouts powered by leverage, is again facing the test of doing one without the other

Asia’s primary dollar bond market recorded its worst week since mid-August, as investment-grade yields extended their climb. Bond sales totaled $264m vs $2.1b the previous week, according to Bloomberg-compiled data.

Two of the world’s top credit rating firms are fast exiting the business of assessing Chinese developers, citing inadequate information from the companies as the sector’s debt crisis intensifies

US high-yield funds bled $712.6 million of cash during the week ended Oct. 12, according to Refinitiv Lipper, a reversal from last week’s intake of $1.87 billion. That was the biggest influx since August.

Banks could be about to deluge the market with more bonds after they post quarterly results, borrowing at a breakneck pace even as other blue-chip companies pull back, and bondholders could suffer in the process