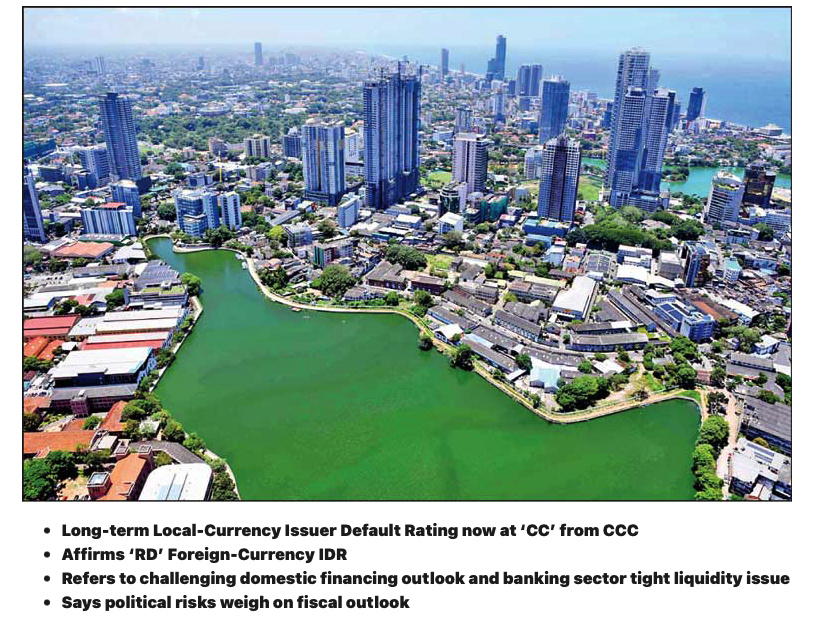 Fitch typically does not assign Outlooks to ratings of ‘CCC+’ or below.

Fitch has also removed the Long-Term Local-Currency IDR from Under Criteria Observation, on which it was placed on 14 July, following the publication of the updated Sovereign Rating Criteria.

Challenging Domestic Financing Outlook: Sri Lanka continues to service its localcurrency debt, but the downgrade of the Long-Term Local-Currency IDR reflects our view that a local-currency debt default is probable, in view of an untenably high domestic interest payment/revenue ratio, high interest costs, tight domestic financing conditions and rising local-currency debt/GDP in the context of high domestic fiscal financing requirements, which authorities forecast at about 8% of GDP in 2022.

According to authorities, domestic interest payments in 8M22 were Rs. 718.8 billion, taking the domestic interest/revenue ratio to an estimated 56% in 8M22; the highest  among sovereigns rated ‘CCC+’ and below.

Reliance on Central Bank financing has increased, as domestic options are limited. Domestic debt rose to about 53% of Government debt by end-July 2022, according to official provisional data. Treasury bill issuance has been increasing.

Fitch expects a local debt restructuring would aim to maintain financial system stability, for example, by extending maturities or lowering coupon payments, rather than a reduction in face value. Sri Lanka continues to service its local-currency debt.

External Debt Restructuring: The sovereign remains in default on foreign-currency obligations and has initiated a debt restructuring arrangement with official and private external creditors. The Ministry of Finance issued a statement on 12 April that it had suspended normal debt servicing of several categories of external debt, including bonds issued in international capital markets, foreign currency-denominated loan agreements and credit facilities with commercial banks and institutional lenders.

Fitch downgraded the Long-Term Foreign-Currency IDR to ‘RD’ following the expiry of the 30-day grace period on coupon payments that were due on 18 April 2022. A Staff-Level Agreement with the IMF was reached on 1 September for $ 2.9 billion, for 48 months, under the Extended Fund Facility. The facility will not be approved until Sri Lanka has implemented agreed actions, financing assurances have been received from official creditors and good-faith efforts have been made to reach agreement with private creditors.

The timing of completion of the external debt restructuring remains uncertain.

Banking Sector Faces Tight Liquidity: Sri Lankan banks’ access to foreign-currency funding is constrained by the sovereign default. Any local-currency debt restructuring would elevate funding and liquidity stress, given the predominance of local-currency funding, at 74% of the total, and large holdings of local currency-denominated Government securities.

A restructuring could necessitate recapitalisation by the Government, though further regulatory forbearance measures could keep banks compliant with regulatory minimums on a reported basis, however, underlying capital positions could stay weak.

We expect a contraction in GDP in 2023 and so are less optimistic on the Government’s fiscal consolidation path. We expect general Government debt/GDP to reach around 109% by end-2022.

President Wickremesinghe was prime minister in the previous administration under President Rajapaksa, who was brought down by protests. Parliament and the Government also remain dominated by politicians who are affiliated with the Rajapaksa family.

High Inflation: Inflation is high, although it has declined from its September peak of 69.8% as measured by the Colombo Consumer Price Index. We expect headline inflation to fall further in 2023 on easing domestic supply conditions, lower food prices and the impact of policy rate hikes.

Risks remain, from a potential commodity-price shock, particularly owing to the war in Ukraine. Financing from the Central Bank has been a key funding source for the Government, but a new Central Bank Act, may limit such financing in the future. We believe rate hikes have peaked, after a policy rate hike of 950bp in 2022.

Economy Contracting: Sri Lanka’s economy contracted by a sharp 4.8% YoY in 1H22 and Fitch expects a full-year GDP contraction of 6.0%. There is still uncertainty about the pace of the country’s economic outlook in 2023, partly because the timing of the external debt restructuring is unknown. Fitch forecast growth to contract by 2.2% in 2023 then to pick up in 2024 under its baseline.