Where have all the tourists gone?

Detailed arrival figures for May indicate that all generating markets showed a YOY increase, with India only surprisingly showing a small drop.

Hence, there seems to be something fundamentally amiss here, where the national arrival statistics show a healthy double digit growth figure YOY, while most hotels are reporting considerable reduction in occupancies. This therefore warrants some careful and serious investigation. 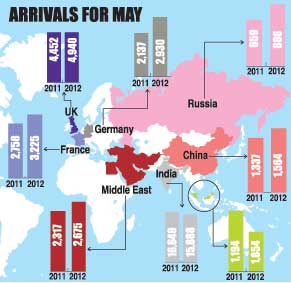 The national arrival figures are established on the basis of international norms, where a person holding a foreign passport staying in the country for more than 24 hours is deemed to be a tourist. There has always been the debate that this does not capture the ‘proper’ tourist who stays for several days in the country and that the number is enhanced by short staying, transit passengers. However, this has been a practice right along, so that there has always been this small error margin included in the system.

The diaspora factor
There is also the debate that these national figures include Sri Lankan diaspora, holding foreign passports, returning to the country for vacation. Most of these persons stay with relations and therefore do not get ‘caught up’ in the hotel occupancy statistics.

A study done by the writer last year and published under the heading ‘Tourist Arrivals – Food for Thought’, looked at the arrivals statistics in comparison with the foreign guest nights (FGN) in graded and supplementary establishments, as given by the SLTDA. FGN gives an accurate indication of the number of tourists who actually stayed in graded tourist establishments and this study revealed that of the total arrivals of 654,476 recorded for 2010, only 82% were ‘real tourists’ who stayed in proper hotels.

Hence, there is this 20% ‘error margin’ due to diaspora arrivals, who are not really tourists but categorized as visiting friends and relations (VFRs). It was also revealed that in the post war era, there could be a slight increase in this diaspora VFR ‘error margin’.
However, this error margin cannot be the cause for this disparity in May 2012, since the majority of the diaspora influx is during the months of November, December and January. 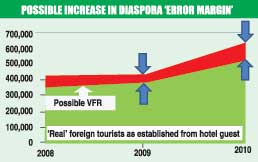 Is there really a downturn in May 2012?
Certainly there is a dramatic downturn in occupancy levels in all upper-end (5/4-star) hotels. This is quite evident from the newspapers, which carry some exciting offers for weekend packages. ‘Buy one and get one free’ attractive credit card discounts of up to 65% and ‘partner stays free’ offers are abundant in the market today. It does not take rocket science or high level marketing knowledge to conclude that these hotels are having low occupancy with reducing demand, forcing them to make these tactical promotions to drive occupancy up.

Unlike any other industry, the rooms in a hotel are 100% perishable stock, which does not have any shelf-life whatsoever. A room not sold is gone forever. Therefore, any hotelier knows that when demand drops, promotion and discounting has to take place, to break even (of course there is a limit to this discounting, because there will come a point when it is perhaps cheaper to keep the room closed than to sell it at a price less than the operational overheads).

Hence, it can be deduced from the foregoing that the larger, higher category hotels are ‘feeling the pinch’ right now.

On the contrary however, there does not appear to be too many such market signals of promotions and special offers, emanating from the lower category of hotels and smaller guest houses. This then could possibly mean that they are not doing too badly. A rudimentary telephone survey of a small sample set did seem to confirm this.


Pricing
It is a known fact that in the post-war period, Sri Lankan hotel room rates have gone up considerably, some as much as 50% from a few years ago. This is evident from the tourism earnings recorded, which has also shown a spectacular increase YOY.

In fact, up to April 2012, earnings have grown 25.7% to almost USD 340 million, compared to USD 440 million for the whole year during the time the civil war was raging. This clearly indicates that hotel rates very definitely have increased YOY quite steeply and the market is possibly showing a resistance for the first time this summer.

Up until now, the pricing, particularly during winter, though still considerably high was still acceptable because of the pent up demand factor for Sri Lanka.

Summer rates are traditionally at a generous discount and perhaps Sri Lankan hotel rates are beginning to be too expensive on a waning demand curve during the summer. A glance at the weekend newspapers will reveal that a weekend in Thailand, inclusive of air fare for two people would be cheaper than staying in a high-end Sri Lankan hotel.

It should not be construed however that rate increases are bad. Certainly, Sri Lankan hotels have suffered for over decades in a survival mode, giving highly discounted rates in a buyer’s market. But today, with the shoe on the other foot, so to say, one must always guard against price increases larger than the market can bear, in too short a space of time. One must also take note of the competition, particularly in the Asian region which offers superior product quality at very competitive rates.
So, eventually, supply and demand market forces will kick in and there will be a phase of price wars and discounting, after which rates will stabilize to realistic levels.


Conclusion
Due to the lack of good up to date and accurate data, analysis and investigations such as this necessarily have to end up as deductions and postulations. No define conclusion can be analytically arrived at. (Unfortunately, the Sri Lankan hotel industry is somewhat guarded in sharing information so that assessing national bench marks such as average room rates, accurate occupancy figures etc. is always a difficult task. In some other Asian countries however, such important data is collected and collated on a monthly basis by national tourism bodies or private sector tourism associations, providing useful and timely information for decision-making.)

Hence, from the foregoing it appears that a larger number of tourists coming to Sri Lanka now are patronizing lower level, cheaper accommodation options. This is particularly evident in the summer months in the western hemisphere, which is not the traditional long haul holiday period, so that bargain hunters would shy away from the more expensive upper end hotels. The emerging economic crisis in Europe can also be another factor causing this shift in demand.

(The writer is a senior tourism professional and was the former Chief Executive Officer of Serendib Leisure Management Ltd. and immediate past President of the Tourist Hotels Association of Sri Lanka)
http://www.dailymirror.lk/business/features/19533-where-have-all-the-tourists-gone.html