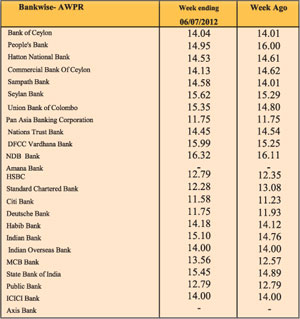 Currency dealers said although policy interest rates would remain unchanged, market expectations remained for interest rates to increase, which was reflected in the Treasury bill auction this week.

Policy interest rates were raised twice since February as a late response to balance of payments problem in order to contain private sector credit growth which was feeding import demand.

The average weighted prime lending rate (AWPR) for commercial loans to high net-worth individuals and corporates moved up to 13.68 percent last week from 13.39 percent a week earlier. A year ago this rate was at 9.41 percent. Ordinary borrowers would be paying a higher rate because the AWPR applies only to the best customers of the country’s banking system. The average weighted lending rate was 14.59 percent last week, up from 13.71 percent a year earlier.