» GLAS will be winner with Super Gain.
by SL-INVESTOR Today at 9:14 am

The week saw heavy institutional and foreign interest on large cap counters which was a trend seen from the beginning of 2013. On the other hand retail involvement in equities continued to increase assisting the small cap counters to gain notably during the week. The fact that small cap counters have significantly regained the trading interest is an indication that the risk appetite of the market participants has returned and is gaining in momentum. The continuous drop in government T-bill rates and the expectations of a stronger LKR and hence a subdued level of inflation in the economy would further assist this trend going forward.

Moving onto global markets the Japanese economy grew 3.5% YoY in 1Q2013 exceeding the rate of U.S recovery, which positioned the Japanese Nikkei 225 firmly in green territory alongside U.S equities. Markets in the rest of the world notably in Europe and Asia remained subdued on account of the growth concerns of the two regions. It is observable that price of industrial commodities are moving in opposite direction to that of equity markets in U.S which is an indication that the current exuberance in U.S stocks may well be largely driven by U.S and Japanese stimulus funds reaching equities given that market interest rates in the two regions remain close to zero. Hence, the positive sentiment shown in U.S equity markets may not necessarily be driven by prospects of real economic growth given that U.S industrial production is down 0.5% in April and jobless claims increased according to latest Federal Reserve’s data.

Turning back to the activities at the Colombo bourse the turnover during the week was mainly assisted by Banking and Diversified sector counters which received special preference by foreign market participants. Heavy institutional involvement was also seen in these counters while retailers focused more on small and mid cap stocks with the aim of reaping short term returns.

The highest contribution to the week’s turnover was made by Commercial Bank accounting to circa 24% of the weekly turnover while heavy weight John Keels Holdings contributed to 12.5%. During the week crossings were also recorded in counters such as Royal Ceramics, Cargill’s Ceylon, Hatton National Bank, Distilleries Company and Sampath Bank. On the back of these developments, the week saw an average turnover of LKR1.2bn and an average volume of 31.1mn.

Bourse continues to rise in value with majority of the counters reaching their 52 week peak...

The Colombo bourse commenced the week on a positive note gaining considerably, however the momentum gradually slowed down towards mid week owing to profit taking witnessed across the board. Conglomerate giant John Keells Holdings which made hefty gains over the past weeks reached its all time high of LKR299.80 during the week and also witnessed its market cap reach the UDS2bn mark, accounting for c. 10% of the total market capitalization. Majority of the large cap counters including banking and diversified counters encountered crossings during the week supported by institutional and foreign interest, whilst the counters witnessed substantial price gains. Further, retail play too was heavily observed on selected counters.

Meanwhile, Standard Charted Bank expressed its concerns over the policy rate cut indicating that the 50bps cut in key policy rates exceeded their expectation of 25bps and was too aggressive considering the economic challenges and issues faced by the country. It further stated that it has revised the country’s projected GDP growth for 2013E to 6.5% from 6.7% due to the weak export performance in 1Q2013. The bank also raised concerns over the country’s ability to maintain a desirable level of inflation and it expects the inflation to rise during 4Q2013 due to the expected increase in demand from the private sector investment resulting from low interest rates. On this backdrop, we urge the investors to align their portfolios towards a medium to long term time horizon focusing on fundamentally sturdy counters which we believe will be less volatile even if the market is to face a correction due to short term profit taking.
Source: Asia Wealth Research 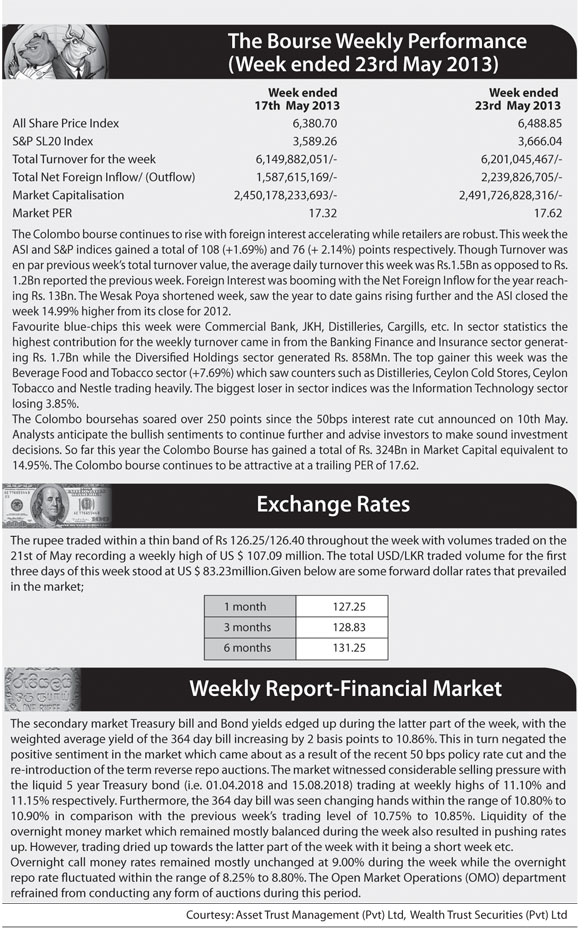 The bullish sentiment continued to prevail this week and the market continued to display a particular buoyant atmosphere. On Monday we witnessed the main index ASI hovering around the 6,500 point mark where it eventually closed at 6,467 points for the day. The more liquid S & P SL 20 index close at 3,649 points since the market slowed down slightly towards the end of the day. Interest was showcased in index-heavy counters while foreigners showed interest in Commercial Bank where its foreign stake increased by 1,136,859 shares as the share price closed at LKR 122.10 gaining 2.61%. JKH continued to rally also as the share price closed at LKR 297.10 gaining 4.20%. Market turnover for the day was recorded at LKR 1.28 Bn whereas the Bank, Finance and Insurance sector contributed mostly to the market turnover witnessing an increase in sector index by 0.13%. Overall market capitalization rose by LKR 33 Bn as foreign investors continued their streak as net buyers for the day recording a net foreign inflow of LKR 288.4 Mn extending the total foreign inflows for this year to LKR 11.47 Bn.

Colombo Bourse closed on opposing reactions on Tuesday as most of the blue chips held ground amidst profit taking in several speculative and mid cap stocks. Reversing Monday’s gains ASI lost a 4 day winning streak and closed 25.03 points (-0.4%) lower at 6,441.64. S&P SL 20 index closed at 3,660.94 with a gain of 11.59 points (0.3%). Turnover jumped to LKR 2.2 Bn for the day with trading in Commercial Bank, JKH and Distilleries as they contributed 45 % of the total turnover. Commercial Bank closed at Rs.125.00, while JKH close at Rs.297.00 as these counters reached fresh 52 week highs. Foreigner investors were net buyers for the ninth consecutive day with net foreign inflow Rs.1.1bn. Net inflows were prominent in counters such as Commercial Bank LKR.677 Mn, Distilleries LKR.139 Mn and JKH at LKR100 Mn as the total net foreign inflow for the year now reached LKR12.0 Bn.

Markets bounced back on Wednesday as retail interest was shown on mid-cap counters, prompted by a fall in interest rates while foreigners focused their attention on banking sector counters. The main All Share Index closed at 6,461.62, up 19.98 points (0.31%) and S&P SL 20 Index closed at 3,663.98, up 3.04 points (0.08%) for day as heavy retail participation was seen in property sector counters such as Ceylinco Seylan Development increased by 7%, , Colombo Land & Development increased by 3% as Overseas Reality increased by 1%. Market turnover for the day was recorded at LKR 767.7 Mn with Commercial Bank LKR Cargills Ceylon and Sampath Bank topped the turnover list today. Prominent price hikes were recorded in counters such as CTC increasing by LKR 10, Chevron Lubricants hiking up by LKR 12.80 and Nestle’s price increasing by a staggering LKR 40. Foreign participants ended as net buyers with a net inflow of LKR 308 Mn for the day.

Due to the impending Vesak Holiday season, a half day trading was declared for Thursday. Nevertheless, the Bourse managed to hold on to its optimism hovering just underneath the ASI 6,500 milestone. The All Share Price Index close at 6,488,85 up by 27 points from Wednesday while the more liquid S & P SL 20 index closed at 3,669.31 up marginally by 2.06 points. Given the short time span for the day, the turnover was recorded at fairly decent LKR 556 Mn for the day as the motor sector was declared as the highest contributor for the turnover with LKR 177 Mn, followed by Land and Property and Manufacturing sectors. Top gainers for the day were Lake House Printers and Publications with a rise in price by 12.45%, J L Morrison Sons and Jones by 11.5% and Softlogic Finance PLC by 10.96%. Meanwhile, foreigners continued their buying sentiment pushing up the net foreign inflows at the end of yet another by LKR 218 Mn.