JKH taps shareholders for Rs. 40 b

The company announced a Rights Issue of two shares for every 13 held at Rs. 175 each. The move will result in the issuance of 132 million new shares and raise Rs. 23.1 billion. The JKH Board also resolved to attach two warrants to the subscription of rights entitling the holder of the right to purchase one share for each warrant. First warrant will be on the basis of one for three subscribed rights at Rs. 185 per warrant exercisable 24 months after issue of the warrant and warrant 2 will be on the same basis price at Rs. 195 each exercisable 36 months after the issue of the warrant. These two warrants will raise Rs. 8.1 5 billion and Rs. 8.58 billion respectively. 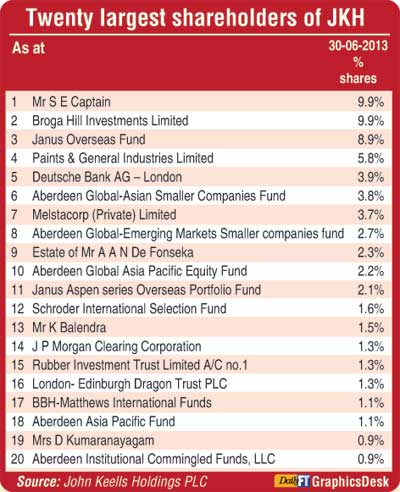 The combined fund raiser amounts to around 40% of the total estimated investment on the Waterfront Properties first stage. With the second phase, overall investment is $ 850 million.

Rights and Warrants issues are subject to regulatory and shareholder approval.

Investors in the stock market had mixed reactions to JKH’s mega announcement. The JKH share price dipped by 10%, to close at Rs. 208 yesterday. Though the decline is bit sharp, JKH has been on a downward trend, mirroring the market’s behaviour overall in recent weeks.

Some analysts said the Rights and Warrants were attractively priced whilst others differed. Brokers said the sharp fall in JKH yesterday could be due to a degree of confusion with the suspension following the mid-market announcement whilst the dip was also on a very small volume of shares.  JKH however recovered before the market’s close from its intra-day low of Rs. 204. JKH’s net asset per share is Rs. 105.73.

Those who termed the Rights as being priced attractively recalled that Malaysian sovereign wealth fund Khazanna bought its original stake two years ago at Rs. 194 per share whilst baring volatility in recent weeks, JKH has been among the most consistent best performing stock in the Colombo Bourse.

They also termed the inclusion of Warrants, which rights subscribers would get free, as a major boost to shareholders, enabling them to cash in if they wish to or have the opportunity to buy JKH shares at Rs. 185 each in two years’ time and Rs. 195 in three years. The mega project will be on company-owned land valued at $ 60 million.

The mega fund raiser comes following the EGM last week when JKH shareholders gave their consent for the upcoming project.

The last time JKH tapped the shareholders was in 2007 with a Rights Issue of 1 for 5 at Rs. 140 per share, raising Rs. 13 billion to retire debt and finance new investments.

“The concept of integrated resorts has gained popularity, particularly in the South East Asian region. Sri Lanka’s proximity to these destinations and to key source markets strengthens its offering as an exciting, and emerging, leisure destination in South Asia,” he added.
http://www.ft.lk/2013/08/29/jkh-taps-shareholders-for-rs-40-b/

» Galleon Probers Trailed Rajaratnam Through Tips, Tamils and Taps
» Phone Taps :95% of the insider trading deals in this country could be unearthed if phone tapping is allowed is indeed shocking
» ATL Shareholders
» SEC gets tough on PLCs!
» Not Re - elected by the Shareholders