Market extended losses further on Tuesday as ASI fell by 30.36 points (-0.53%) to end at 5,752.36 and S&P SL 20 Index closed at 3,210.89, a decline of 18.20 index points (-0.56%).  Market turnover was LKR 295mn. John Keells Holdings was the top contributor to the daily turnover followed by Commercial Bank with LKR 33mn and HNB Assurance with LKR 27mn. Touchwood Investment continued to end as the heavily traded stock amid the rumors about company winding-up. Heavy investor speculation was seen in Touchwood Investment during the day and the stock reached a low of LKR 0.90. Further Asia Assets Finance and Central Investment & Finance were among the mostly traded stocks. Foreign participation for the day was 20% whilst foreign investors were net buyers with a net inflow of LKR 64mn. Cash map closed at 44%.

Bourse closed on Wednesday with lack of direction as benchmark ASI lost 7.47 points (-0.13%) to end at 5,744.89 and S&P SL 20 Index gained marginally by 0.07 points (+0.00%) to end at 3,210.96. Market turnover was LKR 432mn.  John Keells Holdings with LKR 105mn, Commercial Bank with LKR 88mn and National Development Bank with LKR 32mn were the highest contributors to the daily turnover. Touchwood Investment continued to trade heavily during the day as the company officially announced that a Petitioner has filed an application to wind up the company. Further, Vallibel One, Seylan Merchant Bank and Dankotuwa Porcelain were among the heavily traded stocks during the day. Foreign participation is 44% of the total market activity and foreign investors were net sellers with a net outflow of LKR 41mn.

On Thursday Stock market indices slumped by almost 1.0% due to weakening investor confidence mainly on overall economic conditions. Benchmark ASI lost 57.90 index points (-1.01%) to end at 5,686.99 and S&P SL 20 Index lost 32.84 points (-1.02%) to end at 3,178.12. Daily market turnover was LKR 486mn. John Keells Holdings, Hemas Holdings and Panasian Power were the heavily traded stocks during the day. Hemas Holdings announced that the company has finalized the plan to construct & operate USD 40mn worth of luxury five star resort in Tangalle together with Minor Hotel Group, Thailand and the construction will begin immediately. The proposed resort scheduled to open in early 2015. Foreign participation for the day was 45% whilst net outflow of LKR 67mn.

Central Investments & Finance, Commercial Credit and SMB Leasing were among the mostly traded stocks during the day. Foreign participation for the day was 45% and foreign investors were net sellers with a net outflow of LKR 3mn. Foreign net outflows were seen in counters such as John Keells Holdings (LKR 96mn), NDB (LKR 31mn) and Watawala (LKR 23mn) while foreign net inflows were seen in Commercial Bank (LKR 61mn).
Cash map closed at 38%.

The benchmark ASI slumped to its 5-1/2 month low during the week with number of negative contributors towards the ASI exceeding the positive contributors. Meanwhile, Touchwood witnessed heavy selling during the course of the week, ebbing to its all time low of LKR 0.90 consequent to the pending High Court hearing over a petition to wind up its operations, whilst the SEC suspended the stock’s trading activities for three days (from 5 Sep- 7 Sep, both days inclusive) after it decided to commence a fully-pledged investigation into the business operations of the company. In addition to this, Central Investments and Finance too reached its all time low of LKR0.40 during the week witnessing selling pressure following a news paper article regarding a complaint made by two depositors over dishonoured cheques, the company also responded when the case was taken up for hearing by indicating the inability of the directors to make these payments. Moreover, few large cap counters that made considerable gain over the recent past lost ground which also exacerbated the bearish sentiment of the market.

Further, Sunshine Holdings via its related entity Estate Management Services (Pvt) Ltd increased its share holdings in Watawala plantation to 75.65% by acquiring over 2.4mn shares at LKR14.0. In addition, the 10mn unsecured redeemable three year debenture issue of Softlogic Holdings got oversubscribed, whilst Hemas Holdings made an announcement regarding the construction of a 154 room five star luxury hotel in Tangalle together with Minor Hotel group of Thailand.

Conclusion:
Investor interest evaporates despite the market trading at attractive multiples…..
The Colombo bourse headed south during the week losing c.2.8% WoW due to price dips witnessed across the board. Retailers largely kept away from trading activities, whilst focusing on few small cap counters (such as Touchwood and Central Investments and Finance). Despite several large cap counters losing ground, high net worth and institutional participation witnessed on selected counters kept the market alive by bringing modest turnover level. Meanwhile, the overall market earnings for 2QCY2013 was up by c.5% YoY, whilst majority of the key sectors such as Bank Finance and Insurance, Diversified, Beverage Food and Tobacco, Hotels and Travels witnessed weaker than expected performance during the quarter. In the meantime, it is observed that the investors’ interest has been gradually evaporating in the equity market which would have been partially attributed to weakening LKR, lower than the expected quarterly earnings performance and the lackluster earnings outlook for few companies considering the unfavourable movement of macro environmental factors. Meanwhile, retail sentiment was also affected due to small cap retail favourite counters such as Touchwood and Central Investment and Finance witnessing hefty losses. The former witnessed heavy selling consequent to pending High Court hearing over a petition regarding winding up company’s operations, whilst the latter witnessed heavy selling pressure following a news paper article with regard to complaints made by two depositors against the directors for dishonored cheques.

On the back of these developments, a gradual shift has been observed towards the fixed income securities which yield relatively attractive and stable returns cf. to equity investment. Whilst exposure to fixed income investments provides the necessary diversification benefits, a complete exit from equity investments will not be prudent given the empirical evidence that suggest that on a long term time horizon equity investments have outperformed (adjusted for inflation) fixed income securities. That said, we urge the investors to align their portfolio to a mid long term with fundamentally sturdy counters that are trading at attractive multiples and are likely to deliver strong corporate earnings in the future.
Source: Asia Wealth Research Management 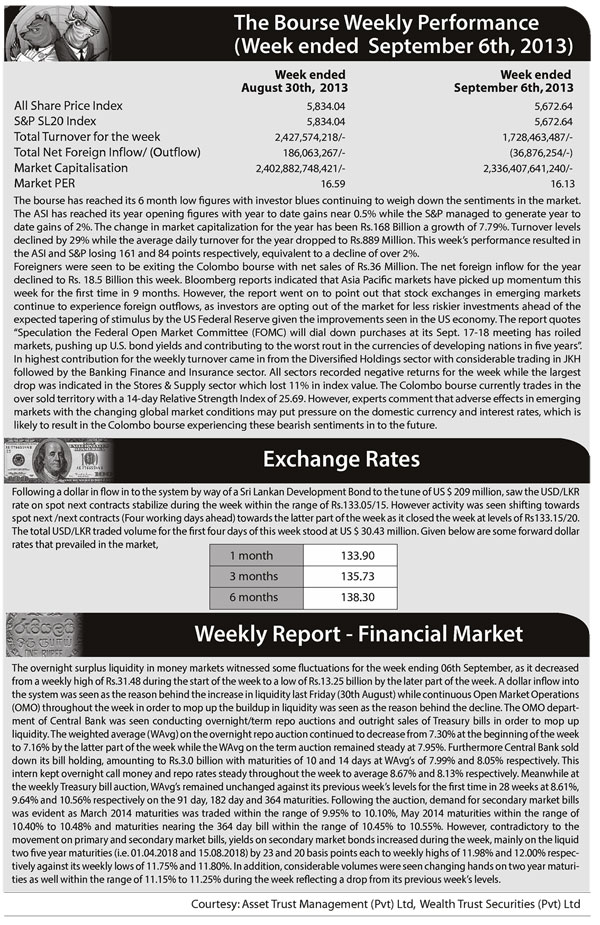