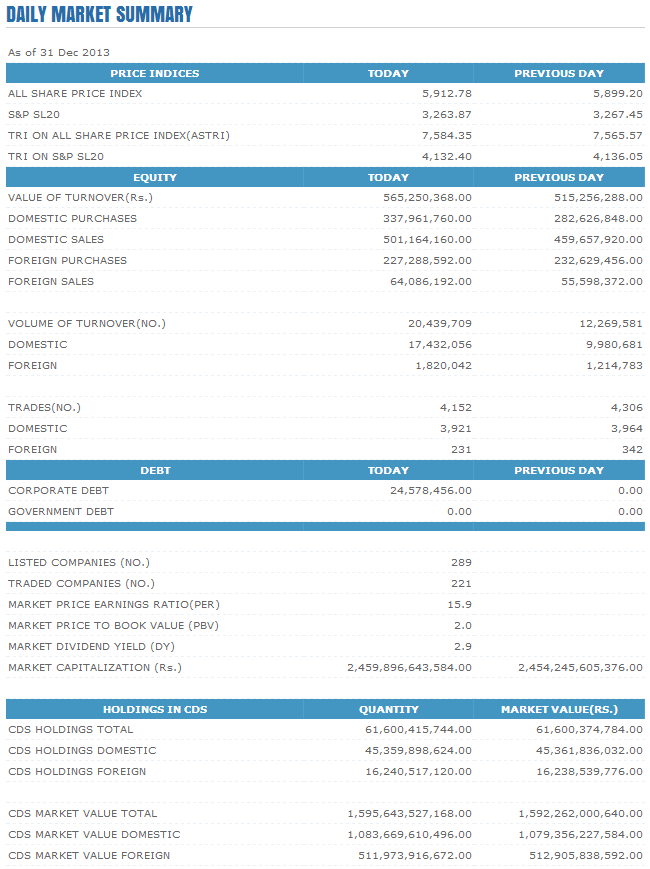 Foreign investors were net buyers for the sixth consecutive day with a net inflow of LKR 163mn. Foreign participation accounted for 26% of the total market activity. Net inflows were seen in counters such as HNB (LKR 88mn), John Keells Holdings (LKR 56mn) and Sampath Bank (LKR 9mn) while net outflows were reported in counters such as Commercial Bank (LKR 5mn) and Dolphin Hotels (LKR 2mn).

On’ally Holdings ex-dividend date falls on next Thursday. The script closed at LKR 47.20,-2.1%.

Meanwhile, as per the announcement made to the CSE, Peoples Leasing and Finance has obtained a syndicated term loan of USD 50mn from Emirates NBD Bank PJSC of United Arab Emirates and The Commercial Bank of Qatar of State of Qatar. The counter closed at LKR 13.40,+0.8% in today’s trading session.

Domestic investor participation in 2013 was approximately 64% of the market activity. The high interest rates in the government and corporate debt markets encouraged most of the investors to shift into fixed income securities and this dampened the momentum this year. In 2013, 24 companies raised a total of approx. LKR 71bn through debenture issues as opposed to approx. LKR 26bn raised in rights issues and approx. LKR 2.1bn raised in the two IPOs.

Foreign investors were more optimistic in 2013 and continued to be in the buying side for the second consecutive year. Foreign inflow to the bourse in 2013 was LKR 22bn, the second highest foreign net inflow with highest being the net inflow of LKR 39bn in 2012. Foreign participation accounted for 36% market activity this year, a notable improvement from 25% in 2012.

The big question for 2014 is whether investors will become confident enough to move into more aggressive growth choices. The market is still recovering from the nadirs in 2011/12 but the bourse is showing some optimism about future growth and there seems to be an overall improvement in sentiment in the market as conditions have relatively changed for the best. We expect the quest for higher yield in the stock market to gain further momentum in the next year due to the decline in the interest rates which is a direct result of Central Bank’s attempts to bolster the economy (The 365day T-bill currently at 8.5%, 316 bps below the rate at the start of this year). Whilst a positive trend could be expected in 2014, we encourage investors to base their buying decisions on the fundamentals and prospects of the company.