» VPEL high return share
by Thushara Ayya Today at 3:18 am

» The COVID-19 impact on financial sector resilience
by CHRONICLE™ Yesterday at 10:51 pm

» Crypto , Digital Currency Trading , Forex
by Kevinmikegrit Yesterday at 9:40 am 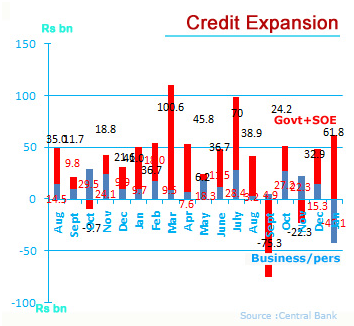 The monthly private credit contraction was the first in the aftermath of the latest balance of payments crisis.
Balance of payments crises, which are driven by high credit growth given added fuel by central bank credit (printed money), are usually followed by de-leveraging which allows state and private enterprises to correct the excesses of bubble years.

Sri Lanka bank credit Jan 2014 - Lanka Business Online
Several prominent business groups which over-leveraged themselves with acquisitions during the bubble years of 2010 and 2011 have taken steps to reduce leverage since the end of the 2011/2012 balance of payments crisis.

The absolute reduction in monthly credit to business was the first seen in the aftermath of the latest balance of payments crisis. Moderate credit trends allow inflation to be low and the economy and the exchange rate to be stable.

After the 2008/2009 balance of payments crisis there were eight months of credit contraction, partly helped by a recovering exchange rate which reduced working capital needs of companies.

The central bank said the contraction in January came from a reduction in gold-backed loans and repayments of short-term private credit. Gold-backed loans surged in the bubble years, amid a global gold-price bubble fired by Federal Reserve money printing.
Analysts say ongoing regulator driven mergers in the financial sector may also be contributing to cautious credit.

State-owned enterprises in energy - whose losses funded by state banks were a primary trigger for the balance of payments crisis - also repaid some of the loans up to November.

Sri Lanka's elected rulers have a consistent record of subsidizing energy with central and commercial bank credit and driving the country into balance of payments trouble.

In December 2013 there was a 57.1 billion rupee surge in credit to state enterprises raising concerns, amid a drought which reduced hydro power but in January 2014 SOE credit was stable, edging lower to 358.5 billion rupees from 356.1 billion in December.

Due to a flaw in Sri Lanka's monetary law the central bank is obliged to print money for the state up to 10 percent of its revenue generating inflation, currency weakness and foreign reserve losses, especially when credit growth is strong.

Though the money is supposed to be repaid in a short time, it has never been done.

With the sale proceeds of a sovereign bond in January 2014, the central bank said its credit to the state will be reduced.

A repayment of central bank credit (a permanent reduction in domestic assets) allows foreign reserves to go up by the same amount).

Sri Lanka has posted a 7.3 percent economic growth in 2013 according to official data, and a blistering 8.2 percent in the December quarter.