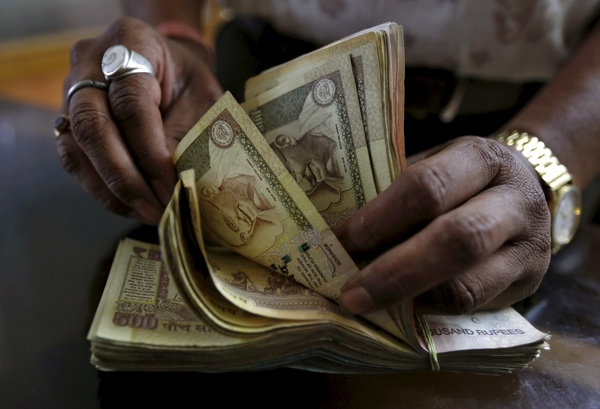 India’s prime minister, Narendra Modi, who campaigned on an anticorruption platform, announced a ban on the country’s largest currency bills.

NEW DELHI — Prime Minister Narendra Modi fired a direct shot at India’s endemic corruption with a surprise move on Tuesday to ban the country’s largest currency bills, starting the next morning.
The ban is intended both to curb the flow of counterfeit money and to take aim at terrorist organizations that rely on unaccounted-for cash. It is also expected to help the government clean up a system that has relied on cash to pay bribes and to avoid taxes.
But the announcement, made on national television in both Hindi and English, led to an immediate upheaval in the country. Abolishing the current version of the 500 and 1,000 rupee notes, worth about $8 and $15, will effectively remove 80 percent of the currency in circulation.
Mr. Modi said banks would be closed on Wednesday. After that, people can exchange the banned notes through the end of the year for those of smaller denominations or new bills that are being created.
A.T.M.s around the country were overrun Tuesday night with people confused about the plan and trying to complete financial transactions before the machines closed the following day. In some places, hundreds stood in line in front of a single A.T.M.


Cash is so prevalent in Indian society that the ban came with a 72-hour exception for paying for hospital bills and airline tickets. India’s low-cost carrier, IndiGo Airlines, sent an email warning customers that banned notes could not be used to purchase in-flight services or to pay excess baggage charges.
The decision amounted to a “surgical strike” on the country’s vast amount of unaccounted-for cash, said Manish Kejriwal, founder of Kedaara Capital Advisors, a Mumbai private equity firm, using a military term.
“This is Modi’s transformational reform,” said Deepak Parekh, chairman of Housing Development Finance Corporation, one of India’s largest mortgage lenders.
“It will be disruptive, it will be inconvenient, but in the medium term, it will be very good.”
Mr. Modi was elected in 2014 after running on an anticorruption platform that included a pledge to fight unaccounted-for cash, also referred to as “black money.” The results have been mixed.
Under one tax amnesty program, Indians owned up this year to about $10 billion in income on which taxes had not been paid, the Modi administration said last month. But another effort encouraging people to declare hidden assets and income abroad met with limited success.
“There’s a perception that whatever he has done on the corruption front is not enough,” said Harsh Pant, a professor of international relations at King’s College London, noting that elections in India’s most populous state, Uttar Pradesh, were expected to take place early next year. “Politically he probably felt he needed to do something more visible.” 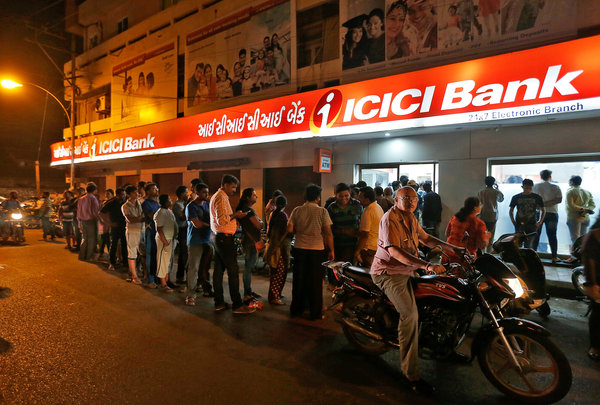 [size=20]People waited to exchange bills outside a bank in Rajkot, India.

While the currency plan had been under discussion for some time, few had expected such a bold step. Mr. Modi kept the decision quiet to prevent holders of vast amounts of unaccounted-for cash from outwitting the ban.
The problems run deep.
Global Financial Integrity, a Washington think tank, has estimated that India lost $344 billion in illicit outflows of money in the decade leading up to 2011.
But it is unclear what the full impact of the ban will be. Studies have shown that corruption can be curtailed by reducing cash transactions, but it is unlikely to be eliminated by the move.
“It is regrettable this will inconvenience” 1.29 billion people, said Pradip Shah, the founder and former managing director of Credit Rating Information Services of India Limited, one of India’s first credit-rating agencies, without stopping “the flow of black money.”
Even so, the ban on large bills is very likely to hasten India’s transition away from cash. About 78 percent of transactions in India last year were made in cash, compared with 20 percent to 25 percent in the United States, Britain and other countries, according to a report by Google India and the Boston Consulting Group.
The new policy puts India at the “leading edge of countries restricting the use of high-denomination currency notes that are now seen as mostly fueling illegal activities rather than legitimate commerce,” said Eswar S. Prasad, a trade policy professor at Cornell.


As the ban works its way through the system, the real estate market could face a shock.
Indian politicians, among others, not only hold vast amounts of cash, but they are also heavily invested in real estate, where it has historically been easy to convert unaccounted-for money into legal currency. A large percentage of real estate deals are done in unaccounted for cash.
Without that cash, real estate prices could fall sharply. And developers holding large amounts of unaccounted for cash would find it suddenly rendered virtually useless, making it hard for them to pay their bills and finish their projects.
“Can you imagine what’s going happen in real estate tomorrow?” said Mr. Kejriwal, who also anticipated a drop in the prices of gold and luxury items.
The exchange process, too, could prove problematic.
For the next two weeks, people will be able to exchange only 4,000 rupees a day, or about $60. People holding vast sums of unaccounted for cash will find it hard to exchange the money at banks because they will need to explain where they got it, risking tax investigations, experts said.
“If I walk in with two crores,” Mr. Kejriwal said, using the Indian term for 20 million rupees, or about $300,000, “people will be worried that the government will be tracking my name and address.”
“People will be scared,” he added.
Mr. Modi, in his speech, addressed the inconveniences the public would most likely experience in the coming days.
“Brothers and sisters, in spite of all these efforts, there may be temporary hardships to be faced by honest citizens,” he said. “Experience tells us that ordinary citizens are always ready to make the sacrifices and face difficulties for the benefit of the nation.”[/size]