The US ambassador to Sri Lanka condemned "the violence against peaceful protestors today, and call on the government to conduct a full investigation, including the arrest & prosecution of anyone who incited violence."

Sri Lankans have suffered months of blackouts and dire shortages of food, fuel and medicines in the island's worst economic crisis since independence, sparking weeks of overwhelmingly peaceful anti-government demonstrations.

But on Monday the biggest clashes since the start of the crisis erupted in Colombo when supporters of the family of President Gotabaya Rajapaksa and brother Mahinda, the prime minister, went on the rampage, AFP reporters at the scene said.

Police fired tear gas and water cannon and declared an immediate curfew in Colombo which was later widened to include the entire South Asian island nation of 22 million people.

Officials said that the army riot squad was called in to reinforce police. Soldiers have been deployed throughout the crisis to protect deliveries of fuel and other essentials but until now not to prevent clashes.

The violence began after several thousand supporters of Prime Minister Mahinda Rajapaksa, brought in buses from rural areas, poured out of his nearby official residence.

Rajapaksa had addressed some 3,000 supporters at his house and pledged he would "protect the interests of the nation."

The supporters then initially pulled down tents of protesters in front of the prime minister's Temple Trees residence and torched anti-government banners and placards.

They then marched to the nearby Galle Face sea-front promenade and began destroying other tents set up by the "Gota go home" campaign that demands the president step down.

Opposition MP Sajith Premadasa tried to move into the area after the clashes, but he came under attack from a mob and his security staff bundled him into a car and drove off.

"The President should accept the responsibility for this violence instigated by the Prime Minister!," opposition MP Eran Wickramaratne tweeted. "You cannot chase us from standing with our people."

US ambassador Julie Chung tweeted: "Our sympathies are with those injured today and we urge calm and restraint across the island."

The violence was the worst since police shot dead one protestor and wounded 24 others blockading a railway line and a highway between Colombo with the central city of Kandy on April 19.

Police had said the crowd had been about to set alight a tanker carrying diesel in the town of Rambukkana, 100 kilometres (60 miles) east of the capital.

"The economic crisis we're in needs an economic solution which this administration is committed to resolving," he tweeted.

On Friday, the government imposed a state of emergency granting the military sweeping powers to arrest and detain people after trade unions brought the country to a virtual standstill.

The defence ministry said in a statement on Sunday that anti-government demonstrators were behaving in a "provocative and threatening manner" and disrupting essential services.

President Rajapaksa has not been seen in public since tens of thousands attempted to storm his private residence in Colombo on March 31.

The country's largest opposition party has already said it will not join any government helmed by a member of the Rajapaksa clan. 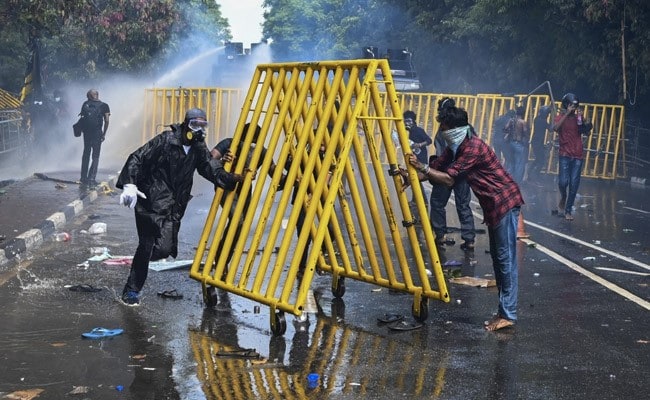 Sri Lanka's crisis began after the coronavirus pandemic hammered vital income from tourism and remittances, leaving it short of foreign currency needed to pay off its debt and forcing the government to ban the imports of many goods.

This in turn has led to severe shortages, runaway inflation and lengthy power blackouts.

In April, the country announced it was defaulting on its $51 billion foreign debt.

Comments
(Except for the headline, this story has not been edited by NDTV staff and is published from a syndicated feed.)