Following is a detailed response to the article headlined ‘Common minimum programme for economic recovery’, compiled by the National Movement for Social Justice, published on June 13, 2022.

Though the above feature authored by the National Movement for Social Justice covers all of eight areas ranging from macroeconomic stability to legislative reforms, this reply focuses on four public sector and state-owned enterprise (SOE) management only. 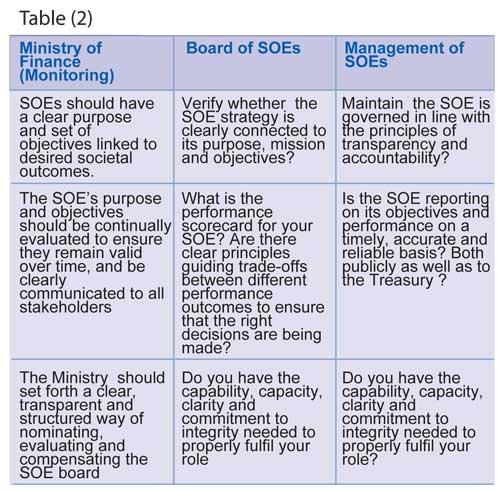 The importance of SOE reforms is pronounced especially during this time, when the Sri Lankan government has approached the International Monetary Fund (IMF) for an Extended Fund Facility, in the foreseeable future.
The debate and contribution of business analysts and economists alike have harboured on SOE inefficiency and waste and call for restructuring efforts, without so much as a framework for reform.

The issues in para four of the feature touch on:
1. Surplus manpower to be redeployed (both at the boards and enterprise management level).
2. Provision of facilities (not only mere hardware) but also capacity building/training of these resource pools.
3. The privatisation of SriLankan Airlines to establish seriousness of purpose.
4. A task force to determine the prioritisation of divestment of these SOEs.
5. State monopolies to be liberalised/Invite competition from the private sector.
6. State bank lending to conform to commercial risk assessment criteria.

The ethos of state enterprise derives from its role in provision of social goods and utilities (the Ceylon Electricity Board (CEB) and National Water Supply and Drainage Board (NWSDB) being two) to the community. Then the dilemma is, why are they delivering these services inefficiently? 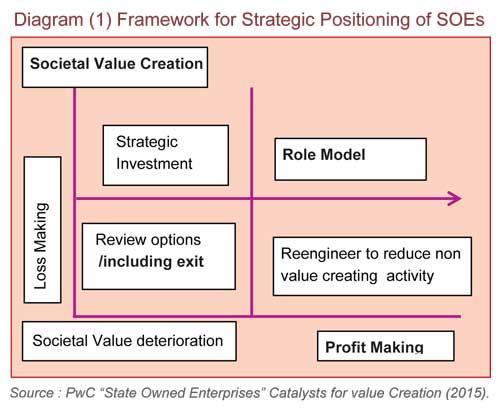 Setting things in perspective
The SOEs generally provide public utilities, infrastructure, banking services and transport and absorb a substantial amount of public investment on which they (generally) provide low returns.

The SOEs have become tools for some countries to better position themselves for the future in the global economy (as in Singapore), given increased competition for finance, talent and resources. It appears that some strongly performing SOEs can grow larger in scope (example the Sri Lanka Ports Authority (SLPA)/Sri Lanka Telecom (SLT)) – there is a pronounced downward trend in state ownership, when you view the region shaping towards optimum returns on capital.

Even if there is a tendency of the government to only partially divest its ownership, it also means that while there may be a drop in the share of SOEs in the national economy, this does not necessarily mean there is a corresponding decrease in the government’s ability to wield influence over these enterprises. (Example SLT again).

What does efficiency mean?
The SOEs cannot be purely evaluated on the basis of financial results (the profit and loss account) but more widely on how they contribute to societal value creation, taking an integrated and holistic view of their impact. (See Diagram 1).

The SOEs then need to be modelled on a new score card, capturing the key performance indicators (KPIs), which clearly link to their wider purpose. This goes beyond financial reporting to integrated reporting, inclusive of social, welfare, human and innovation efforts.

Then the purpose of restructuring is:
1. Increase private investment in SOEs.
2. Reduce government financial support.
3. Help them operate as a commercial business.

They need to follow the processes (detailed below):
■Define strategic SOEs (55)/Others, which can be turned around (example SriLankan Airlines) and those among the 200, which need to be scrapped/employees redeployed on tested competencies.
■Actively owned and managed through a clear purpose and mission linked to the desired societal objectives.
■In the above model, the board of directors and executive leadership should fulfil the 4Cs: (1) clarity (2) capacity (3) capability and (4) commitment to integrity.
■Be transparent and accountable through quality, timely and reliable reporting of SOE performance. Become role models for good reporting, building trust between the government and citizens.
■SOEs like any organisation need to maintain sound internal management in order to maximise efficiency and effectiveness within the constrained budgets (doing better for less).
■Simultaneously, SOEs should leverage its external influence by cocreating value with other stakeholders in society and driving growth linked to its strategic objectives.

Analysis in context
The losses of the SOEs such as Ceylon Petroleum Corporation (CPC), the CEB, Lanka Sathosa, the Sri Lanka Transport Board (SLTB) and SriLankan Airlines are due to many reasons, including mismanagement, corruption, political interference, non-cost-reflective pricing policies and utter disregard for pubic assets and money.

Though it is identified that there are over 200 SOEs (now listed as 400), the published accounts available in the public domain are those of 55, mainly for strategic SOEs. Based on the finalised accounts of these SOEs. (Finance Ministry Fiscal Report March 2020/21). (See Table 1)

A review of the net operating results (last column in Table 1) indicates except for the SLTB the other four enterprises have registered some degree of improvement, i.e., less losses (CPC* because of the debt recovery policy). By no means that these results are to be assumed as efficiency improvements.

We now realise that the aggregate losses of these SOEs amount to 14 percent of the GDP. A detailed report of an independent authority overseeing SOEs revealed that (1) policy incoherence, confusion and lack of a strong set of metrics among regulatory and monitoring agencies account for this confusion; (2) lack of domain expertise within these enterprises, with bloated structures and (3) the desire on the part of these inefficient officials (includes SOE senior staff and politically-appointed board members – SriLankan board is a case in point) to maintain a culture of inefficiency, advantageous to them or their political backers.

So, it is appropriate for the Power and Energy Minister to proclaim, “We cannot pass on the cost of inefficiency on to the consumer or the public and it is therefore essential that the SOEs eliminate management inefficiencies, prior to the cost reflective pricing being implemented.” (Including the TU bilaterals for a 300 percent increase in salaries and wages annually)

The above in summary answers the dilemma we are faced with in divesting or improving the efficiency of the SOEs.

Freedom of association
I quote Article 98 of the International Labour Organisation (ILO) convention that trade unions be able to commit to voluntary negotiations with a view to come to a collective agreement only in its violation. This is entirely unfounded except in the case of some buyer-driven global production networks (the typology for value chains). A good example would be the apparel firms. By their nature, they gravitate towards cost advantage and location advantage to improve the competitiveness. However. this is more the exception than the rule.

The author had analysed the Collective Agreement practices in Sri Lanka (particularly the plantations sector unions and the CMU) in a paper read in Tokyo (Labour Management Cooperation: Collective Bargaining – APO in 1998) to prove the need for free association and voluntary bargaining with unions at enterprise level for productivity improvement.

So, the analogy of private sector efficiency versus public sector waste is not that simple. (Revisit Diagram 1, if needed).

Getting out of trap
The principal means of getting out of the trap of the ‘bleeding’ SOEs is strengthening their internal framework and increasing their accountability.

Though some enterprises like the CEB, CPC, NWSDB, SLPA and AASL have entered into contracts (letters of intent), more SOEs are to follow. These KPIs (performance measures) were not realised. We need to pinch ourselves that this is not a reality statement. During the past, the then Public Enterprise Deputy Minister launched a similar drive to hold the SOEs accountable for KPIs. Neither the KPI framework nor the quarterly reports demanded from the chairmen, CEOs and senior management arrived by the end of that year.


Clarity (of mission) capacity (of management and human resources), capability (of competent teams) or for that matter commitment to integrity (particularly the last one) cannot be legislated into action or for that matter realised through gazetting them or directing them through Treasury circulars. It requires resoluteness of the political leadership to be able to walk the talk and mobilise a team of competent leaders (if ministry secretaries do not fit the bill) enlist private sector leaders/and consultants with the mandate to leverage their capability.

This is a serious change programme, which the Treasury’s Public Enterprise Department alone cannot mainstream. Some questions to ponder at board and management levels on turning around these SOEs appear in Table 2.

The difference between rhetoric and achievement is often one’s commitment to integrity. This is exactly the quality that made Singapore or Malaysia great from what they were in their past.