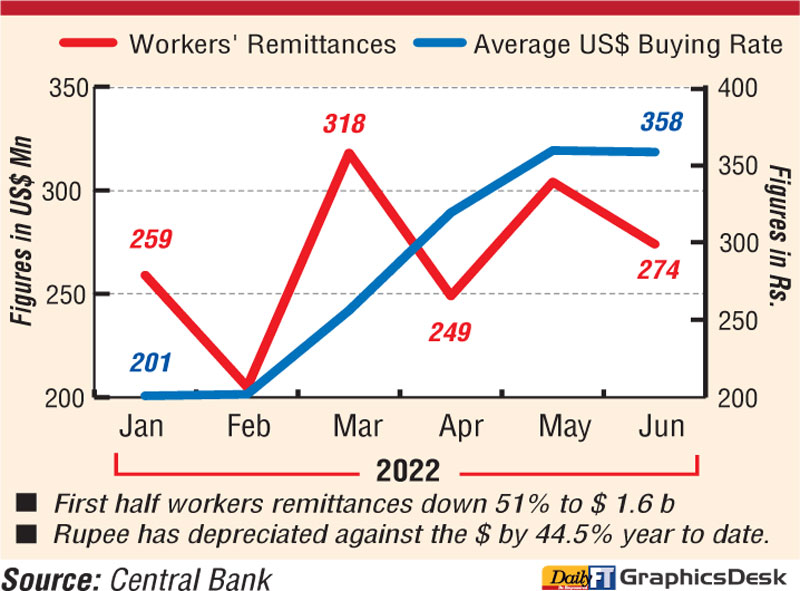 Workers’ remittances in the first have plunged by 51.6% to $ 1.6 billion from a year ago with June reflecting a sharper dip and reversing the rise in the previous month.

Year-on-year dip had worsened in June as well as in May.

When May inflows rose the Central Bank (CBSL) said it can mainly be attributed to the stability observed in the domestic foreign exchange market, along with the narrowing of the gap between the grey market and official exchange rate.

In that context analysts said that the dip in June is likely to add more pressure on the Government and the Central Bank which have been championing much needed inflows via official channels and cited the exchange rate being realistic and attractive to do so as opposed to what is offered in the grey market.

After the rupee was allowed to float freely on 7 March, the country saw a jump in workers’ remittances to $ 318 million (highest year to date) but since then the inflows had been erratic (See chart).

The erratic performance is also disturbing since more people have taken up overseas employment.

» Future of Plantations
» India's Infosys to lay off up to 5,000 workers: media
» SLT Head quarters workers on strike
» Sri Lanka's tea workers fear for their future
» Reduction in foreign remittances from Lankan workers