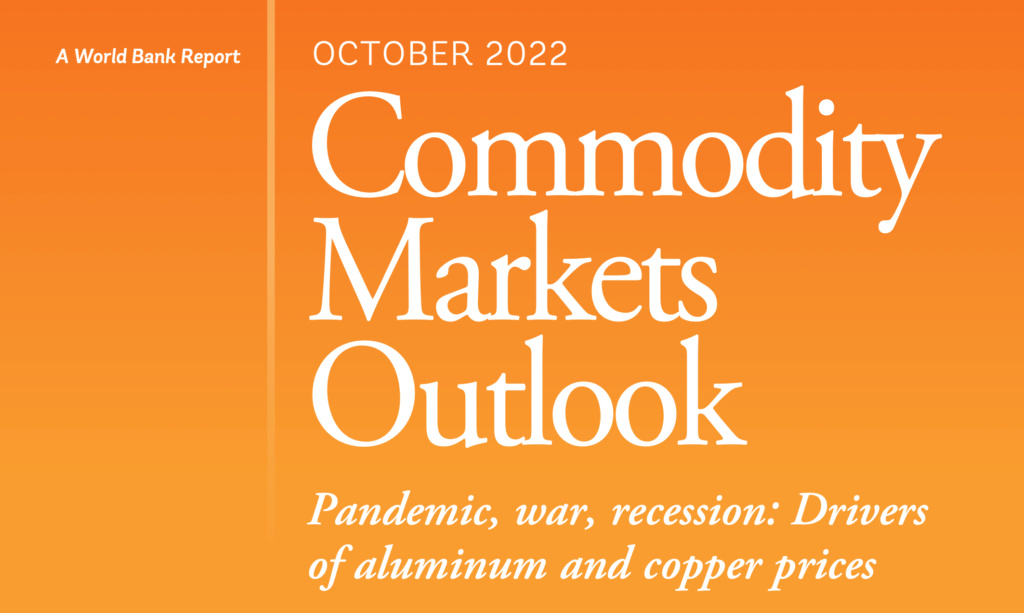 WASHINGTON, October 26, 2022—The shrinking value of the currencies of most developing economies is driving up food and fuel prices in ways that could deepen the food and energy crises that many of them already face, according to the World Bank’s latest Commodity Markets Outlook report.

In U.S. dollar terms, the prices of most commodities have declined from their recent peaks amid concerns of an impending global recession, the report documents. From the Russian invasion of Ukraine in February 2022 through the end of last month, the price of Brent crude oil in U.S. dollars fell nearly 6 percent. Yet, because of currency depreciations, almost 60 percent of oil-importing emerging-market and developing economies saw an increase in domestic-currency oil prices during this period. Nearly 90 percent of these economies also saw a larger increase in wheat prices in local-currency terms compared to the rise in U.S. dollars.

Elevated prices of energy commodities that serve as inputs to agricultural production have been driving up food prices. During the first three quarters of 2022, food-price inflation in South Asia averaged more than 20 percent. Food price inflation in other regions, including Latin America and the Caribbean, the Middle East and North Africa, Sub-Saharan Africa, and Eastern Europe and Central Asia, averaged between 12 and 15 percent. East Asia and the Pacific has been the only region with low food-price inflation, partly because of broadly stable prices of rice, the region’s key staple.

“Although many commodity prices have retreated from their peaks, they are still high compared to their average level over the past five years,” said Pablo Saavedra, the World Bank’s Vice President for Equitable Growth, Finance, and Institutions. “A further spike in world food prices could prolong the challenges of food insecurity across developing countries. An array of policies is needed to foster supply, facilitate distribution, and support real incomes.”

The price of Brent crude oil is expected to average $92 a barrel in 2023—well above the five-year average of $60 a barrel. Both natural gas and coal prices are projected to ease in 2023 from record highs in 2022. However, by 2024, Australian coal and U.S. natural-gas prices are still expected to be double their average over the past five years, while European natural gas prices could be nearly four times higher. Coal production is projected to significantly increase as several major exporters boost output, putting climate-change goals at risk.

“The combination of elevated commodity prices and persistent currency depreciations translates into higher inflation in many countries,” said Ayhan Kose, Director of the World Bank’s Prospects Group and EFI Chief Economist, which produces the Outlook report. “Policymakers in emerging market and developing economies have limited room to manage the most pronounced global inflation cycle in decades. They need to carefully calibrate monetary and fiscal policies, clearly communicate their plans, and get ready for a period of even higher volatility in global financial and commodity markets.”

Agricultural prices are expected to decline 5 percent next year. Wheat prices in the third quarter of 2022 fell nearly 20 percent but remain 24 percent higher than a year ago. The decline in agricultural prices in 2023 reflects a better-than-projected global wheat crop, stable supplies in the rice market, and the resumption of grain exports from Ukraine. Metal prices are projected to decline 15 percent in 2023, largely because of weaker global growth and concerns about a slowdown in China.

The outlook for commodity prices is subject to many risks. Energy markets face significant supply concerns as worries about the availability of energy during the upcoming winter will intensify in Europe. Higher-than-expected energy prices could feed through to non-energy prices, especially food, prolonging challenges associated with food insecurity. A sharper slowdown in global growth also presents a key risk, especially for crude oil and metals prices.

“The forecast of a decline in agricultural prices is subject to an array of risks,” said John Baffes, Senior Economist in the World Bank’s Prospects Group. “First, export disruptions by Ukraine or Russia could again interrupt global grain supplies. Second, additional increases in energy prices could exert upward pressure on grain and edible oil prices. Third, adverse weather patterns can reduce yields; 2023 is likely to be the third La Niña year in a row, potentially reducing yields of key crops in South America and Southern Africa.”

Special Focus: Decline in Copper and Aluminum Prices and the Impact on Developing Economies
Concerns about a possible global recession next year have already contributed to a sharp decline in copper and aluminum prices. A Special Focus section of the report examines the drivers of aluminum and copper prices and explores implications for emerging market and developing economies that export these commodities. Prices will likely remain volatile as the energy transition unfolds and demand shifts from fossil fuels to renewables, which will benefit some metal producers. Metal exporters can make the most of the resulting opportunities for growth over the medium term while limiting the impact of price volatility by ensuring they have well-designed fiscal and monetary policy frameworks, the report highlights.