» Most Undervalued Shares
by cheetah Today at 8:04 pm

According to sources Phoenix Ogilvy Advertising King Irvin Weerakkody has promised UNFGG that all advertising campaign of this elections will be handled at a huge discounted rate from Phoenix Ogilvy Pvt. Ltd where Irvin is the Chairman.


According to sources from Irvin's company Irvin's Ogilvy subsidiary Ogivy Redworks has been handling the annual reports of Perpetual Treasuries for the last few years since inception and now Colombo voters are saying that two 'Insiders' of Bondscam have been nominated under UNP's National list for this Elections. According to insiders from UNP Ranil has promised Irvin that all government advertising will be given to Ogilvy if Ranil Wickremesinghe become the Prime Minister of next government after August 18th and Ranil has also promised to offer all the Annual Report preparation contracts of Government Entities and State Owned Subsidiaries to be given to Irvin and Ogivy owned Redworks.


Irvin was the former UNP organizer at Maharagama Electorate


Reference Asian Tribune; The tragedy is (for him) that whenever he decides to chase an issue it ends up as an irrelevant farce. Example: dressing up farmers in jeans and promising them computers as an election gimmick – an issue exposed publicly in the in-house publication of the leading advertising agency, Phoenix, headed by his former organizer of the Maharagama electorate, Irvin Weerakkody. 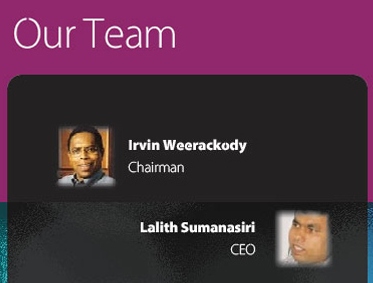 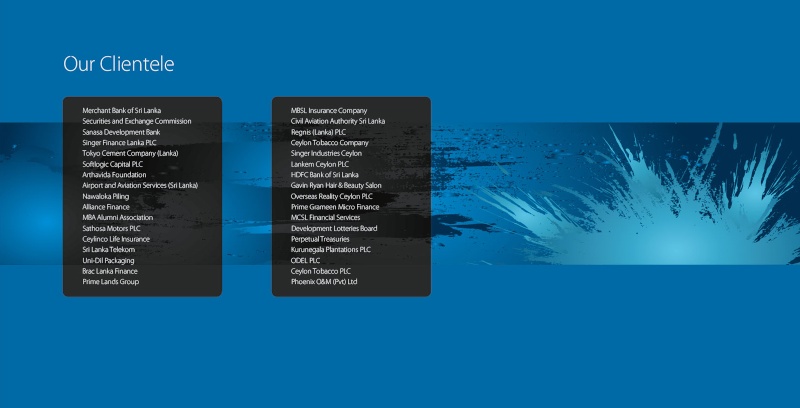 
Krishantha Cooray among 4 new Directors appointed to SLT Board

Media industry personality Krishantha Cooray is among four new Directors appointed to the Board of Sri Lanka Telecom (SLT). The company announced that Cooray has been appointed as an Independent Non-Executive Director. The other three are Mohamed Firdouse Farook (Independent Non-Executive Director), Nilanthi Sonia Anne Pieris (Independent Non-Executive Director) and G.C. Chandra Ekanayake of Treasury as Non-Independent Non-Executive Director. SLT said these new appointees have no relevant interest in shares of the company as of the date of appointment which was 3 February. Cooray is a private sector professional with an academic background in political science and law. After schooling at S. Thomas’ College Mt. Lavinia, Krishantha read for Bachelor of Arts (Honours) in Political Science and Law at the University of Middlesex.     As a professional he has held several executive positions in leading private sector companies, including the Ceylinco Group, Arpico Group and the Maharaja Organisation. He joined the Arpico Group as the Head of Business Development and went on to found the first completely independent publishing house owned by a public quoted company. He was instrumental in setting up Rivira Media Corporation Ltd., under the Arpico Group and served as the founding Director/CEO. During his stint at the Maharaja Group, Krishantha worked closely with electronic media functioning as a Consultant on all news-related matters pertaining to the TV and radio stations of the company. His longstanding association with the media includes contribution of articles to several national newspapers. He is also a Working Committee member of the UNP.     Farook is an entrepreneur with over 20 years of rich experience in diversified fields of business including telecommunications, green energy, property development, venture capital and investment promotion. He is an old boy of Royal College, Colombo. Farook currently serves on the boards of several Sri Lankan, Malaysian and Hong Kong based companies including PowerHub International (Malaysia), PowerHub Green Energy Ltd., Omega Group Ltd., Lakeside Property Developers Ltd., Manelwala Hydropower, subsidiary of Pan Asia Power. He has extensive expertise in the field of alternative energy project development and has been an investor in a number of mini hydro power and renewable energy development companies. He was one of the founding investors and Director of Pan Asia Power Ltd., listed on the Colombo Stock Exchange. As an international venture capitalist and investment promoter Farook has many business interests in Malaysia and Hong Kong.     Pieris is an Attorney-at-Law of the Supreme Court and counts 27 years of experience including 27 years of practice at the Bar. She currently serves as the Partner of Paul Ratnayeke Associates, an international legal consultants, Attorneys-at-Law, Solicitors and Notaries Public. Earlier she held the position of the Assistant Secretary of the Bar Association and numerous positions at the BASL. Ekanayake is a Member of the Sri Lanka Administrative Services and joined the service in 1984. Presently she functions as the Director General of the Department of National Budget of the Ministry of Finance and has held senior positions in the Treasury as Director, Economic Affairs, Controller of Insurance, Additional Director General, Department of External Resources and Director General Department of Trade, Tariff and Investment Policy.     She holds a Science Special Degree from the University of Kelaniya, an MBA from the Postgraduate Institute of Management, Sri Lanka and postgraduate diploma in the fields of development planning techniques, international relations and economic development. She also serves as the Treasury representative on the Board of NDB Bank. The Treasury owns a 49.5% stake in SLT whilst Malaysia’s Global Telecommunications Holdings NV/Maxis own 44.98%. The new appointments were following the resignation of Kalinga Indatissa, Pushpa Wellappili, Jayantha Dharmadasa and Shameendra Rajapaksa as well as Chairman Nimal Welgama from the SLT Board following the change of political administration. With the latest appointments, the Board of Directors of Sri Lanka Telecom Plc comprises P.G.K. Sirisena (Chairman/Independent Non-Executive Director), C.C. Beng, J.J. Blatt, L. Paratz, L.C. Foong, K.P. Cooray, M.F. Farook, G.D.C. Ekanayake and N.S.A. Pieris.