» What you need to remember is there is ALWAYS a way to make income from day trading stocks. Stock market for beginners and day traders
by Asoka Samarakone Today at 9:00 pm

» LPRT and CHOT old and profitable businesses, yet severely undervalued
by deli Today at 5:13 pm

» LOLC to enter the giant Indian Market
by samaritan Yesterday at 11:27 am

» Buy lofc tomorrow - Maharaja
by ashan silva Yesterday at 11:12 am

» HORANA PLANTATIONS PLC (HOPL)
by cheetah Yesterday at 11:05 am

» LOFC Future
by samansilva Yesterday at 11:05 am

» SGH buys EXPO from retailers
by samaritan Yesterday at 9:34 am

FC doing research on these. with next financial report they will change price target.
ASI going to reach 7000+ and interst rates are falling now.

I sence some accumilation in Finance companies especially #LFIN and #COCR. Important to keep an eye

Next run LFIN and COCR give more returns.

Posts : 4069
Equity Stars : 8374
Reputation : 187
Join date : 2015-05-16
I feel there is malicious publicity against SDB. There are updates about SDB being made within half an hour conveying the same negative message without anyone commenting. Is telling the same thing over & over again is known as updates??? Food for thought!

To highlight some details about SDB:

Prabhash Subasinghe is one of the non executive Directors at SDB, and sometime back was targeted by a group with malicious motives in relation to his substantial holdings at Ceylinco Insurance.

The adverse publicity seems to be nothing but malicious and disgusting!

chathura123 wrote:Yes.i will take up your challenge. See what will happen so many hidden things under this bank .if it is named as bank it is not upto level .

Good. Why don't you explain and expose the hidden things under this bank and why you feel its not up to level, which will be useful to the general public.

Posts : 248
Equity Stars : 4106
Reputation : 9
Join date : 2012-02-14
Finance Company failures now have become a common occurrence in Sri Lanka. Very funny. How many poor people get caught ? But never been a Bank Collapsed.. So why not we stop having Finance Companies if the Govt cant regulate them properly ??

Posts : 4069
Equity Stars : 8374
Reputation : 187
Join date : 2015-05-16
Finance Companies do well when the economy is healthy & growing, b'cos people will be in a position to honour their commitments. Banks hold on to better quality collateral from borrowers in comparison to FCs. But what has happened is the Govt has screwed the economy and hence some Finance Companies are in trouble.

We offer seasoned and fresh cut bank instrument for lease/sale, such as BG, SBLC, LC, DLC, Bank Bonds, T strips and other. BG/SBLC Financing can offer individuals and corporations Leased Instruments. Leased Instruments can be obtained at minimal expense to the borrower compared to other banking options.

The Leased Instruments includes: BG’s, Insurance Guarantees, MTN,(SBLC) Standby Letters of Credit and Third Party Guarantees such as a standby forward commitment to purchase or a standby loan. If you are a potential Investor or Principle looking to raise capital, we will be happy to answer any questions that you have about this opportunity and to provide you with all the details regarding this services. Our BG/SBLC Financing can help you get your project funded, by providing you with yearly renewable leased bank instruments.

We work directly with issuing bank lease providers. You will work with your bank to ensure  that the leased instruments will be returned to them before the maturity date. This Instrument can be monetized on your behalf for Trade in PPP. If interested in our bank instrument offer kindly contact me via Email.


ECONOMYNEXT – Sri Lanka’s finance and leasing companies are under pressure to raise capital and regulatory thresholds rise and bad loans pick up, which may also trigger mergers, Fitch Rating said. 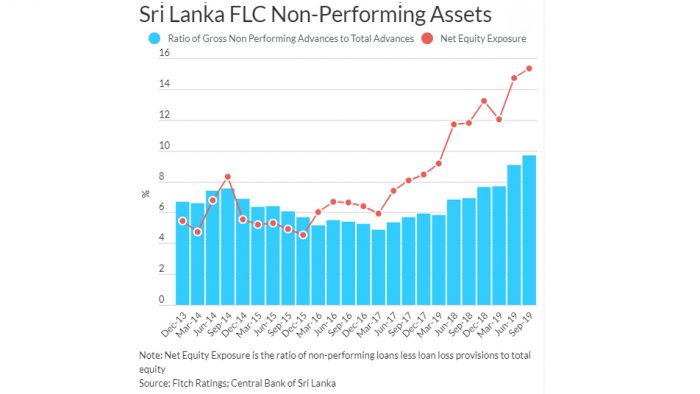 Two currency collapses then came in rapid succession in 2015/2016 and 2018, triggering two busts in a row. Bad loans in the sector had risen to 9.69 percent, in part due to weak loans growth.

Non-performing loans were at 9.86 percent at finance companies by September 2019, and 4.47 percent at specialized leasing companies.

Meanwhile Fitch said finance and leasing companies may not be able to boost profits, as economic growth may remain weak.

“We believe this risk will be higher for smaller standalone finance companies.

“Those FLCs that have raised external capital recently, as part of efforts to meet the higher capitalization standards, have benefited mainly from support from their major shareholders.