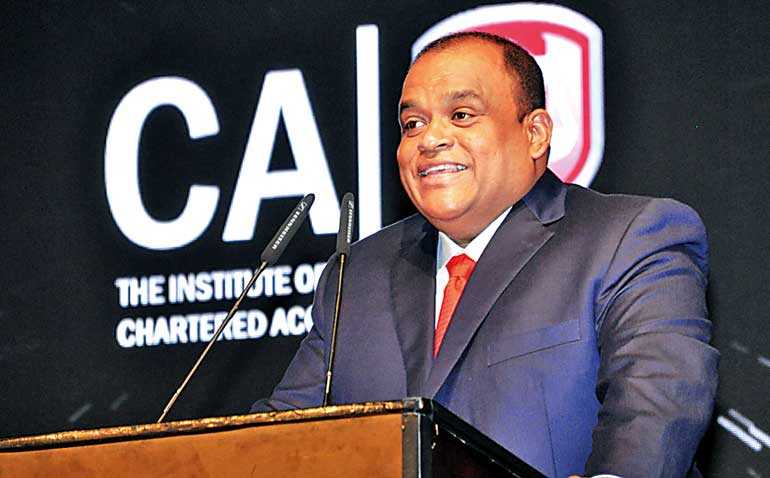 Business tycoon Vallibel One Plc Chairman Dhammika Perera yesterday said quality education to a wider audience was the only solution to escape the middle-income trap, a well-kept secret that many developed economies have practiced.

Sharing his visionary thoughts towards a sustainable economic development at the Technical sessions of the 39th National Conference of the Chartered Accountants themed ‘Hyperleap,’ Perera highlighted the need to increase the Budget allocation for the education sector, insisting that it would help build the lives of the socially and economically challenged communities in rural Sri Lanka.

“Quality education is a key cornerstone in developing our economy. Having an educated human capital is one of the main components that investors watch out for, apart from Doing Business Index ranking, a sound public transportation system and cheap energy,” he pointed out.

Noting that only 4% or 25,000 graduates were employable, he said that a system needed to be developed to absorb the remaining 96% in economic activities.

“I think we need to build a system where the Government can invest on their education, where the beneficiaries’ knowledge transpires into Gross Domestic Product (GDP),” he added.

With a total of 10,500 schools islandwide, Perera pointed out 2,900 schools lacked proper sanitary, water and electricity facilities. However, these are the schools that the majority of underprivileged children attend. “To build proper infrastructure in 1,000 schools, we can roughly estimate a cost of Rs. 300 billion, along with the inclusion of smart classes in schools that lack competent teachers,” he stressed.

He also emphasised on the need to open up branches of popular national schools in the suburbs, pointing out that it would help children who attend these schools as well as tackle traffic. “Instead of concentrating only within Colombo, I think it is important that these popular schools branch out to areas such as Maharagama, Homagama, Panadura, Moratuwa, Wattala and Ja-Ela to better accommodate students coming from these areas. It also can work as a solution to beat traffic within Colombo,” he added.

Considering the evolution of the education benchmark, Perera said a bachelor’s degree taught in English would be the key yardstick for future employment.

“Although leaders of developed countries and international funding agencies keep pointing out that Sri Lanka is in a middle income trap, no one is really saying that the solution to get rid of it is education. Lee Kuan Yew had written many books, but he never mentioned education because it is a practical solution that can be executed within three years if there is a proper system in place,” Perera stated.

“When the average number of students passing as Chartered Accountants is as low as 300 per annum, they will definitely have opportunities in the accounting field, hence they are reluctant to explore other sectors beyond their comfort zone. Right now, accountant professionals are caged into their fields, but if we can at least increase this number to 700 students per year, then they will at least look for opportunities in other sectors,” he said.

Reiterating that there was no point in criticising the Government, he said that as a business community they should be able to provide solutions to the Government, adding that he had submitted several proposals similar to legal drafts that could be implemented.

Perera, who has built 1,000 fully-fledged pre-schools in the country in his personal capacity as a businessman over the past two years, said his next social project was aimed at teaching mathematics to 10,000 underprivileged Ordinary Level (O/L) students via web-based classes.