RCL, owned 51% by Vallibel One limited, is a holding company of 2 tile manufacturing plants in Horana and Ehaliyagoda and a newly developed bath ware plant in Homagama.
The company is the holder of a famous brand, “Rocell” and has set a benchmark in premium quality standards in the tile industry. Further, the company enjoys a 55% market share of the local floor tile market and is the cost effective provider among competitors.

Lets have a look at the company financial summery for ten years; 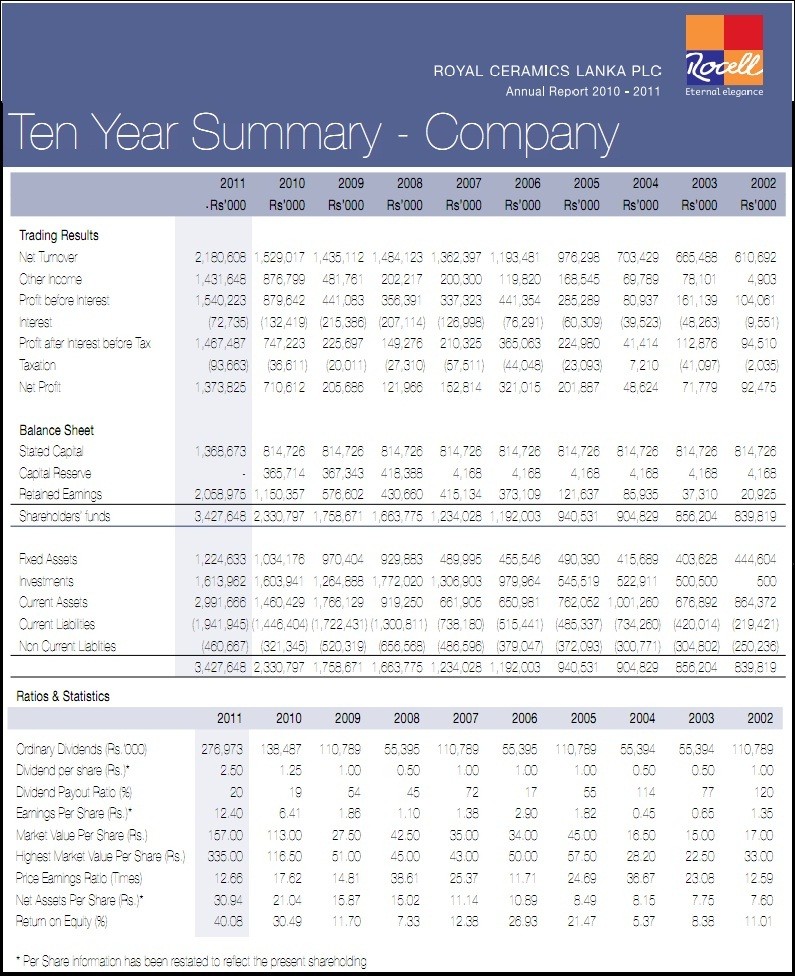 The Company - RCL
From 2007 - 2008 we see the expenses of the company has risen and current liabilities hold a higher ground hindering the working capital. And in 2009 company has managed to bring it down to a positive figure of 43.9 Mil and then in 2010 to 14Mil a little lower but again in 2011 they've made it over 100Mil.
(calculations; Working Capital = Current Assets - Current Liabilities)

After the Net profit drop in 2007 to 152 Mil (more than 50% from the figure of 2006 of 321Mil) we saw a further drop of 25% in 2008 but in 2009, the company has started to regain the momentum in 2010 it made a whooping figure of 710Mil which was an increase of 345% copmared to 2009. Again in 2011, the company managed to record a 93% growth in net profit than the previous year
which was a remarkable comeback in my openion although this was supported heavily by other income portion.
Also we have to really take note this other income portion because it has been playing a vital role in adding revenue to the bottom line since 2007 as well.

Acquisitions;
The Company has acquired  20.03%  stake of Lewis Brown & Company Limited at a cost of Rs.621.2 Mil on 16th of June 2011. However it has not been consolidated for the further Quarter ended 30th June 2011.
Further more, the Company has acquired 100% stake of Ever Paint and Chemical Industries (Pvt) Limited (retail name - Colorbrite) on 1st of April 2011 at a cost of Rs.70.35 Mil.
However the latter shows a minus net asset value of 16.49 Mil and Goodwill of 86.47 Mil which tallies the acquisition cost of Rs.70.35 Mil. With the cash and cash equivalent of 5.22 Mil of the new subsidiary this brings a net cash outflow of 75.56 Mil to the RCL. 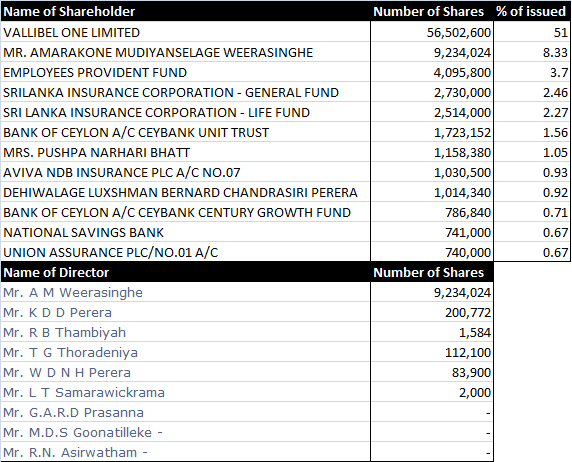 Future outlook
As per the introduction of  mr. W D N Perera, RCL is planing to invest around Rs. 3 billion to build
a third tile factory in Kiriwattuduwa, Homagama. Work on the plant was supposed to kick off in June 2011, and they have already contracted overseas companies to supply the machinery. The project will be partly funded through debt and internally generated cash and expected completion in about 18 months time.
The plant will add 12,000 square meters per day to RCL production lines. They expect to have adequate stocks to supply the market with this.
This addition would boost production capacity immensly.

The company can benefit from the local construction industry which is currently one of the prime beneficiaries of the post-war economic boom, with construction activities taking place across the northern and eastern regions.

Continuous turmoil in the Middle East and North Africa, is having an impact on oil prices, inflation and hurt export prices.

It was stated on the annual report that galloping crude prices have also hurt RCL fuel supply bill.
Concerns are that RCL are in an energy-dependent industry and its not always possible to pass on fuel shocks to the end users.
Therefore this is a significant impact to the bottom line and the fierce competition forces RCL to abide by the current pricing strategy.

Also there was a concern over shortage of clay and feldspar from local suppliers which are hurting their raw material inputs. The alternative is to import raw materials from China, Taiwan or India, which would be more expensive, but high in quality.
But at the same time China and india exported ceramic goods are coming to the SL market at a cheap rate in the midst of Indian imports being tariffed @ 100% Tax.

RCL's brand name "Rocell" is a lifesttle choice that differentiates it from the rest from market share. And among peers like LWL, TILE and CERA, RCL stands at a discount to its revenue growth. 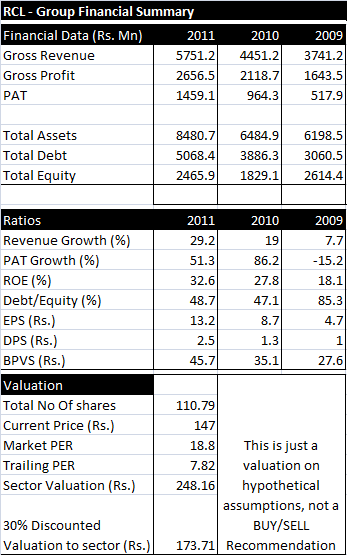 This is just a valuation on hypothetical assumptions, not a BUY/SELL Recommendation.

I am also bullish on RCL but waiting for entry point.

a good company with potential and fundamentals,better to watch for it

Posts : 95
Equity Stars : 4261
Reputation : 0
Join date : 2011-08-22
Fantastic!!! guys...this is the way this forum should operate.... The true meaning is in posts like this one, its educational and knowledgeable and those who are new to the market has so much to learn, about companies and the businesses. Whoever started this forum, I want to congratulate u!!!!! Pl continue to share your knowledge for inexperienced investors. Some of you have years and years of experience. Its far blessed to give than receive too!!!

I have already invested.


Miyako is a leading tile importing company in Sri Lanka

Look at there earnings, Its one 1 1/2 qtr report financials can support this current price level.
Im collecting this these days, I used half of my quota allocated for RCL these days at 112. I'll buy again after the budget is announced.

As mentioned by members before in this forum i don't think govt will jeopardizes one of few developing manufacturing sectors we have.

I am Foreign Investor from Austria. And very recently I joined with this forum to get the idea about of Colombo Stock Exchange.

See I told you yesterday, today became reality.   Actually (RCL.N000) is good share. But due to this government influence price has gone down. today it went down around 3 rupees. See what will happen by end of this month.

But I am sure price will not go down after 90 rupees.  What I have notice 75 % Sri Lankan share market is running on government and other influence.  It doesn't mater whether company performed well or not.

Posts : 1817
Equity Stars : 4779
Reputation : 93
Join date : 2015-06-07
Location : North America
RCL is trading at 50% discounted price.This price will be good even tile import tax removed.If it go down further,then there will be further opportunity for collection.But RCL is not a crap share.We will see in future.

Yahapalanaya wrote:RCL is trading at 50% discounted price.This price will be good even tile import tax removed.If it go down further,then there will be further opportunity for collection.But RCL is not a crap share.We will see in future.

RCL share price is going further down. But it do not go beyond the 95. Actually RCL good share.  but not worth in this quarter.

See told I week a ago, this share price would go down. It almost became reality. That is way of Sri Lanka share market.

RCL share price is going further down. But it do not go beyond the 95. Actually RCL good share.  but not worth in this quarter.

See told I week a ago, this share price would go down. It almost became reality. That is way of Sri Lanka share market.

That's because i don't believe in this unpredictable govt. they say they are business friendly but does something totally opposite.
I have minor fear of cutting down of import tax on construction materials such as tile. If that happen, all tile sector share prices will come down by at least 10%.


It's better to buy some now and wait and see until the budget is announced. That's what I did, I bought a bit and waiting to buy more RCL after the budget.