Broad money growth for August 2013 was in line with projections for the year, indicating that the current monetary conditions could support higher growth in the second half of 2013. A sharp moderation in credit obtained by public corporations from the banking sector during August 2013, due to improved cash flow positions, was also expected to continue and thereby further alleviate demand side pressures and release resources for private sector investments. Further, policy easing since December 2012 had resulted in a reasonable downward adjustment in short term interest rates, including call money market rates and prime lending rates, with space remaining for further adjustments in longer term lending rates.

During the year, the conduct of monetary policy has been aimed at providing the necessary impetus to allow for economic growth to accelerate, in the absence of demand pressures. In that context, the policy easing in December 2012 and May 2013 reduced the borrowing costs of economic agents gradually, thereby encouraging private sector investments. These policies have strengthened the macroeconomic environment which is likely to enable the economy to comfortably exceed a GDP growth rate of 7 per cent in 2013.

In the meantime, the recent growth forecasts for advanced economies and emerging market economies have raised concerns regarding the global economic recovery. The heightened uncertainty arising from the delay in announcing tapering of the quantitative easing (QE) by the US Federal Reserve, coupled with the current political impasse experienced by the United States, resulting in a government shutdown and inability to increase the debt ceiling has also increased market volatility. Nevertheless, with the inflow of NSB bond proceeds, and the decline of the trade account deficit by 24.2 per cent in August 2013 due to higher earnings from exports and a reduction in the expenditure on imports, gross official reserves reached US dollars 7.0 billion, equivalent to 4.5 months of imports, further easing pressure on the current account and the balance of payments.

In this background, the Central Bank was of the view that, in keeping with the benign inflation and favourable inflation outlook environment, there is still further space to ease monetary policy in order to harness Sri Lanka’s full economic potential, and stimulate the economy to reach a higher growth trajectory in 2014. Accordingly, the Monetary Board at its meeting held on 14th October 2013, decided to reduce the Repurchase rate and the Reverse Repurchase rate of the Central Bank by 50 basis points, respectively, thereby placing the Repurchase Rate at 6.50 per cent and the Reverse Repurchase Rate at 8.50 per cent with immediate effect.

The date for the release of the next regular statement on monetary policy would be announced in due course.

Is this the turning point for the market? Will it touch 6400 by the end of November? My guess is yes.

Now that the Central Bank of Sri Lanka has brought an aggressive interest rate cut of 50 basis points, it is wise, as a stock investor, to be aware of the potential effects behind such a decision. Although the relationship between interest rates and the stock market is fairly indirect, the two tend to move in opposite directions. Here's why:

A decrease in interest rates means that those people who want to borrow money enjoy an interest rate cut. But this also means that those who are lending money, or buying securities such as bonds, have a decreased opportunity to make income from interest. If we assume investors are rational, a decrease in interest rates will prompt investors to move money away from the bond market to the equity market. At the same time, businesses will enjoy the ability to finance expansion at a cheaper rate, thereby increasing their future earnings potential, which, in turn, leads to higher stock prices. Investors and economists alike view lower interest rates as catalysts for expansion.

Overall, the unifying effect of an interest rate cut is the psychological effect it has on investors and consumers; they see it as a benefit to personal and corporate borrowing, which in turn leads to greater profits and an expanding economy.

Posts : 1073
Equity Stars : 6319
Reputation : 275
Join date : 2011-02-09
“The global scenario would partly have played a role in the bigger-than-expected cut,” said Sanjeewa Fernando, an economist at CT Smith Stockbrokers Pvt. in Colombo. “With global demand expected to be subdued, the rate cut will be a stimulus to exporters through lower borrowing costs and a more favorable exchange rate.”

'We thought it is a right time to give a push to the economy,' Central Bank of Sri Lanka Governor Ajith Nivard Cabraal told Reuters after announcing the rate cut.

'We would be able to achieve a 7 (percent) plus growth in the next year, even closer to 8 percent,' he said.

Sri Lanka is investing heavily in infrastructure, with major new port and airport projects underway along with urban and rural road building.

Growth this year was forecast at 7.5 percent, after slumping to a three-year low of 6.4 percent in 2012.

The decision to cut interest rates defied expectations. A Reuters poll of 11 analysts had expected the central bank's monetary board to keep the monetary policy rates unchanged.

The IMF had recommended on Sept. 25 that the central bank should keep policy rates steady to assess the impact of the U.S. Federal Reserve's possible tapering of stimulus programme in coming months.

Cabraal downplayed the risk posed to Sri Lanka by the Fed's expected tapering, though foreign selling of government debt had helped push the rupee to a record low of 135.20 per dollar on Aug. 28.

'I don't think Fed tapering will have an impact on us as we have already factored in. Cabraal said. 'In the event of tapering, I don't think we will have outflows, because those investors did not come due to QE (quantitative easing).'

Having steadied off its low, the rupee is now just 2.5 percent down since the start of the year.

The exchange rate, which is closely shepherded by the central bank, opened steady at 130.85 per dollar, while the share market opened 0.01 percent down, as markets showed scant reaction to the reate cuts.

With the latest easing, the central bank has cut policy rates by 125 basis point since December, and eased other policy tools.

The repurchase rate was slashed to 6.50 percent, a level unseen since the central bank began compiling data for the interest rate in December 1999. The reverse repurchase was cut to 8.50 percent, its lowest since February 2012.

The central bank said in a statement that given the benign outlook for inflation -- it eased to 6.2 percent year-on-year in September -- there was further space to ease monetary policy.

Cabraal said the outlook was positive so long as there were no sudden spikes in global oil or commodity prices in the next 12 months. 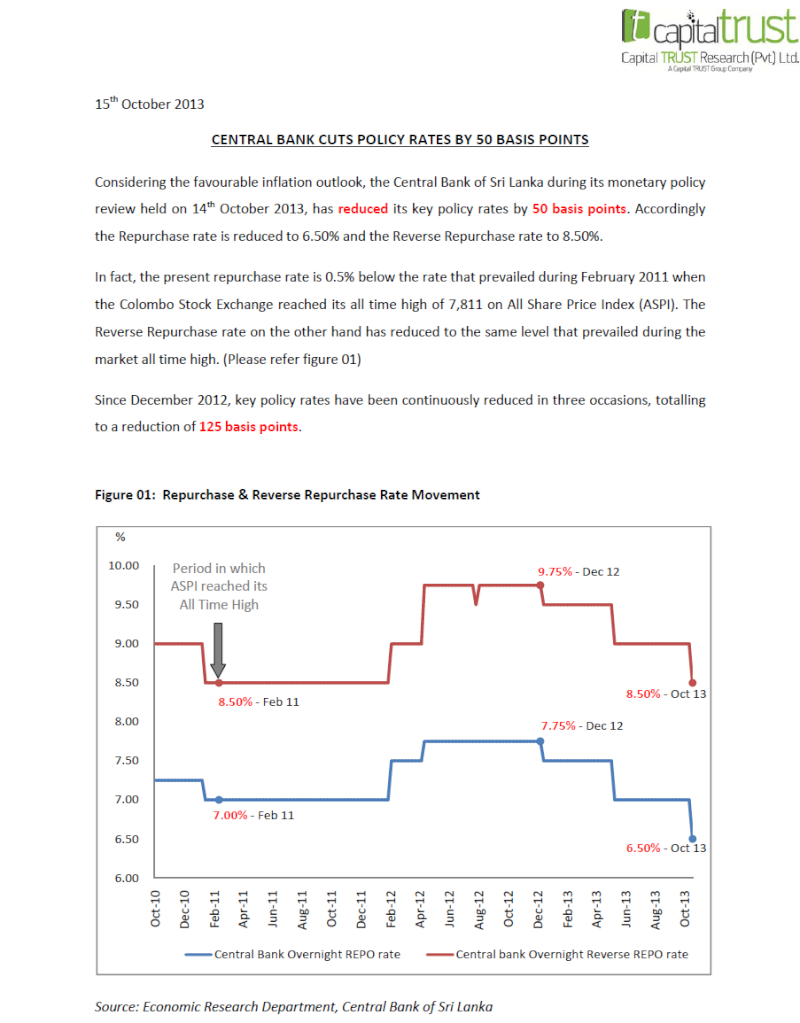 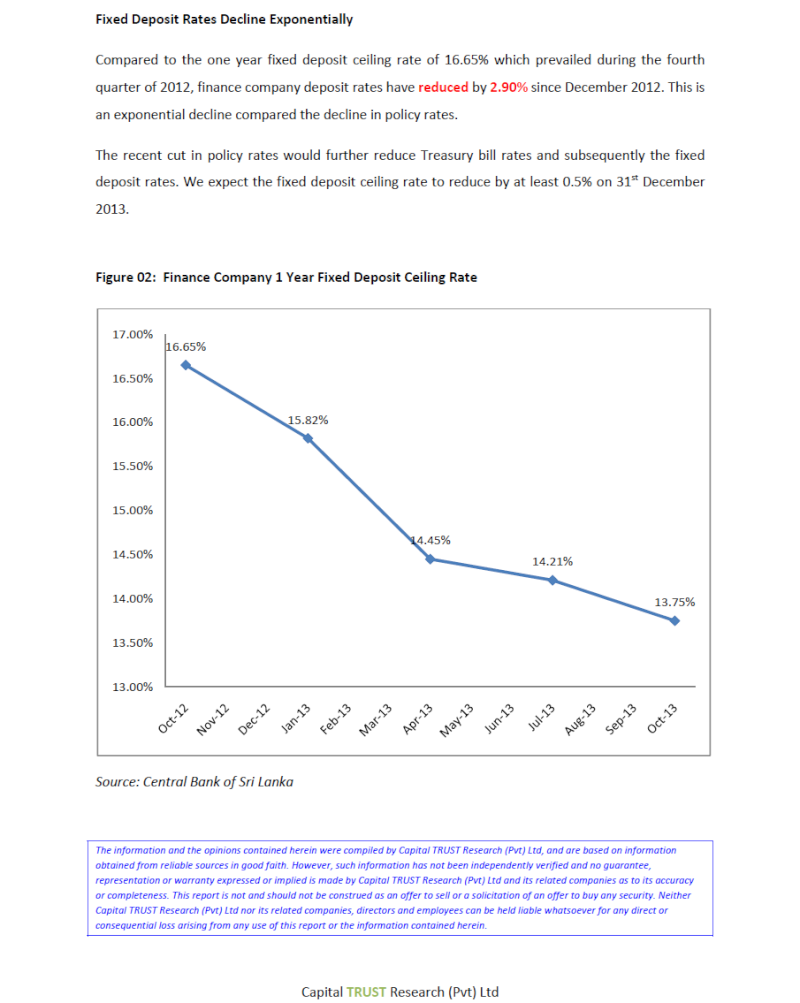 Posts : 247
Equity Stars : 4521
Reputation : 6
Join date : 2012-05-14
Location : colombo
Policy  rates  have  been decreasing  steadily  since the beginning  of the  year as  a result  interest  rates  payable to depositors  by  Financial  Institutions  have  also been decreasing  the  hardest  hit are senior  citizens  depending  on  interest  income.
As  at  present  senior  citizens are paid an additional 1%  this is  hardly  sufficient  to  compensate  them for  the spiralling  cost of  living let us hope  that the  Central  Bank  would  look into this issue.

Posts : 780
Equity Stars : 4791
Reputation : 78
Join date : 2011-01-31
Low interest rate will push price of commodities down. Further low cost of capital effect for increasing of products and services. Ultimately will increase the living stranded of everybody.

@bullrun wrote:Low interest rate will push price of commodities down. Further low cost of capital effect for increasing of products and services. Ultimately will increase the living stranded of everybody.

I agree with you.. but it is part and parcel of CSE. If you are in CSE you have to play accordingly. When you have better understanding you can out perform others..

He does not want to give some input or give some courage to members. My personal feeling is that the market will perform very positively in coming years. Only need is to hold the ground by selecting good stuff.

This man always go after MR. The history will give an appropriate place to him and hence, let the history to do that. We have come here to find some sort of easy money rather than working heard in a factory or in a field. We are not working people. We can blame to all but will never be able to work without mistakes. This gentleman may have worked in Gov just like a pet dog without even bark. Now after retirement he has stated to blame MR and all.

It is OK if it is his wish but he should go to Lipton circus without discourage our members at this good time.