» Maharaja after long time
by Wickyz Today at 11:59 am

» LOLC gets balance $ 225 m from Cambodia PRASAC stake sale
by stockchaser Today at 10:45 am

» Lanka IOC draws investor interest at CSE
by samaritan Today at 9:36 am

» BEST OFFERS FOR BANKING INSTRUMENTS
by Mohammed020 Today at 1:58 am

Posts : 4065
Equity Stars : 14495
Reputation : 1013
Join date : 2014-11-05
Progress review of my trading analysis. Yes Pegasus, Palm Gardens, Dolphin hotels moved satisfactorily. However still lot of potential remains with AHUN,AHPL,STAF,PEG and SIGV. It's worth to look at these next week. 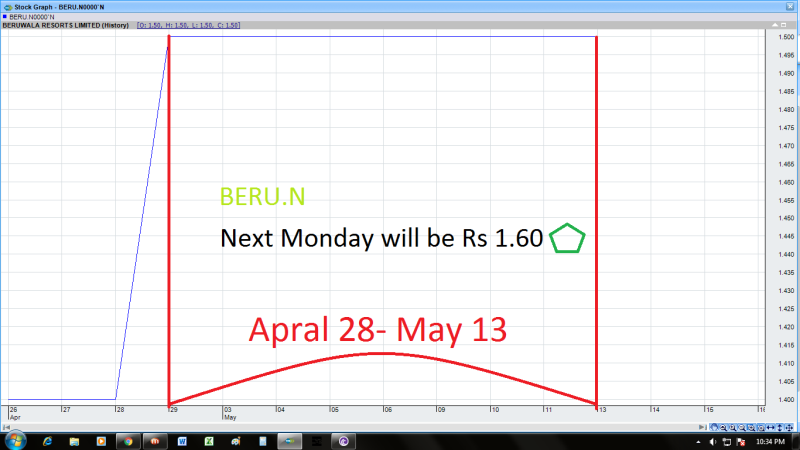 I think this one is the best hotel share. RHTL. (owned by Dammika perera)

Go through the financials and see....

@EquityChamp wrote:Yes that's why you have the highest opportunity there. All stocks went down have recovered. Now players will search for new counters who didn't appreciated and you never know what will happen to Stafford if they enter. Don't go too far imagine our nimantha80 enters there. This is where you get the benefit.
Early Bird will catch the worm. Better to analyse and decide.

Posts : 3326
Equity Stars : 10365
Reputation : 347
Join date : 2014-02-26
After end of  war, hotel sector got some boost. I can remember I was travelling very often   places like Hambantotoa, Kotagala, Unawatuna, Trincomalle, Galle, Kandy, Nuwera-Eliya, Negombo, Beruwella Aluthgama etc.  We saw hardly any foreign investors in beaches or in hotels those days. Now we are seeing completely different atmosphere in the hotel sector. Well managed companies will outperform others.
As there are lot of hotel stocks in the market, it is wise to identify some of the best hotels which can produce higher ROE, generate more cash and those who can create mid and long term shareholder value. We can see some good hotels in the above list. Some of the emerging ones are missing. These reputed hotels will buy quality food from quality food producers to maintain their quality in the coming decade. Food is very important in the hotel sector.

Remember this is the season for Hotels and we all know the tourist arrivals have been increasing YoY.

for the star class hotel segment to do well the high spending segment of the tourist should increase...More of the tourist arrive here are low cost accommodation and facility seeking backpackers.

On the other hand with a static number of rooms only way a hotel can show YoY growth is its prices.If the price increases the hotels become unattractive as there are more cheaper destination. Our city hotels have these issues. But the share price is trading at high PE

Have to be cautious in selecting

@stockback wrote:we can expect good result from hotel sector. every quarter they are improving...

@stockback wrote:we can expect good result from hotel sector. every quarter they are improving...

all hotel will performed well. except few bad management ones

that is not a bad performance. revenue increase. they can improve profits in future....

The hotel industry remains the only industry in the country which has the potential to turn around the sluggish economy. We eagerly look forward to the opportunity of partnering with the government in taking Sri Lanka’s economy to new levels, with proper incentives and conditions in place similar to those in other countries in the region, The Hotels Association of Sri Lanka (THASL), said in a year-end statement yesterday.

​
“We further request the government to pursue both legal and policy reforms that will recognize tourism as an export industry and establish the necessary framework for a vibrant, diverse and successful tourism industry in Sri Lanka,” THASL President Sanath Ukwatte said.


THASL requests the government, once again, to treat the industry fairly. “Excessive and arbitrary taxation has made it very difficult for our member hotels to compete with other regional countries. Sri Lanka’s hotels pay 22 percent tax on the total revenue (not profit) in addition to corporate income tax (on profit).

This includes taxes such as Value Added Tax (VAT), Nation Building Tax (NBT), Tourism Development Levy (TDL) and Economic Service Charge (ESC). This multiple taxation on both revenue and profit creates an environment that is unfavorable for Sri Lanka’s hotels and thereby makes our tourism offering uncompetitive in comparison to our neighbours. This is our strongest disincentive in developing the tourism industry.”


“In addition to the existing revenue-based tax burden, the tourism industry is also faced with municipalities and local governments threatening to charge an additional 1percent tax on total revenue. We believe this tax is entirely unrealistic, discriminatory and arbitrary as it only targets the hotel industry. Hotels already pay annual municipal and local government rates to cover municipal and local government services. We request the Government to abolish all such arbitrary taxes and adopt a simplified and fair tax policy similar to that applicable in other countries in the region. This is an urgent priority,” Ukwatte added.


“We would like to see the government taking some meaningful steps in the New Year to relieve us of uncompetitive tax burdens and encourage the sector to enhance and grow. We are hopeful that the budget for 2019 will accommodate our requests, in order to realize and strengthen the inherent potential of the industry.”


THASL, which has a member base of over 250 hotels, said Sri Lanka is now steadily on the path to recovery, following a series of internal issues that rocked the industry.

Carbotels (Pvt) Ltd, and Amaya Leisure Plc has which own 66.2 percent of the firm has received a take-over-offer for their entire holding subject to due diligence, Hunas Falls said in a stock exchange filing.
No price was mentioned.

In the six months to September 2018, the hotel earned revenues of 68.7 million rupees up 4 percent from a year earlier and lost 1.3 million rupees.

But a profit of 4.8 million rupees, down from 6.5 million rupees was posted for the quarter.
The hotel is located off Kandy.
https://economynext.com/Sri_Lanka_s_Hunas_Falls_soars_amid_take_over_offer-3-13063-7.html

Re: HOTEL AND TRAVEL SECTOR