» Lanka Walltile PLC Investment Case
by judecroos Yesterday at 8:55 am

Market volatility appears to be evenly spread affecting both blue chip and small cap counters. However, the steeper fluctuation of the ASI relative to the S&P SL20 during the middle of the week indicates that the contribution of mid and small cap counters to market volatility was relatively higher during the week. This is also on account of the fact that retail investors are more sensitive to short term market-moving data as opposed to high net worth’s whose investment motives are essentially long to medium term. In this connection, slow down in credit growth to private sector during the year coupled with the moderation of YoY growth in market earnings in 1Q2013 is likely to have affected the level of sentiment at the Colombo Bourse, rather than monetary policy measures in the U.S. as been suggested. This is reflected by government securities market recording a WoW net foreign inflow as at 12 June 2013 indicating that the effect of higher yields in U.S government securities in the face of Fed’s QE measures has had no negative effect on local debt markets. In this light the LKR lost ground mainly on the back of circa USD 1.9 billion worth of foreign loans of the banking sector maturing between the months of May-July. The total maturing foreign loans is as much as 50% of the total Treasury securities held by foreign investors.

On the other hand, market interest rates are expected to dip on account of the moderation in private sector credit growth coupled with the effect of policy rate cut in May which is gradually transmitting to market rates. Hence, equity market conditions may improve once AWLR of the banking sector starts to fall due to the drop in private sector credit demand and lowered policy rates.

Turning to global markets, the U.S Fed’s move to reduce bond purchases coupled with slowdown in economic activity in China kept majority of the key markets in Asia, Europe and U.S firmly in red during the week. However, the Fed’s move is likely to be temporary as U.S unemployment level is still relatively high at 7.6%. Further, the fact that U.S output growth is expected to slow down to 1.9% in 2013E on account of the government spending cuts (source: IMF), the Fed’s move to ease QE measures could be temporary. The increasing treasury yields would have prompted the reduction in QE given that U.S government’s debt financing costs are at stake in the face of a sharp increase in treasury yields as U.S debt to GDP ratio stands over 72% in 2012. Hence, the move to slow down QE measures would have been most likely due to the need to bring down primary market treasury yields if a significant volume of government securities are scheduled to be announced soon. Hence, the Fed is most likely to restart the QE programme once large scale Treasury auctions are completed. However, in hindsight it should be noted that unevenness in the pace of Fed’s QE tends to create short term boom and gloom conditions in key markets.

Commenting on the Colombo Bourse weekly turnover level was mainly assisted by foreign and local institutional interest witnessed in conglomerate John Keells Holdings which added a massive 57.9% to the weekly turnover. In addition, institutional interest was also evident in Commercial Bank and Distilleries Company which together contributed circa 14.5% to the weekly turnover. Furthermore, large scale crossings were witnessed in counters such as Ceylon Tobacco Company and Carsons Cumberbatch. In light of these activities bourse recorded an average turnover of LKR 997.3 mn during the week whilst the average volume was 17.3 mn. Foreign purchases during the week increased 209.4% WoW to LKR 3.4 billion, whilst foreign sales increased 378.6% WoW to LKR 3.3 billion recording a net foreign inflow of LKR 171.9 million.Market capitalisation stood at LKR 2,363.9bn, and the YTD performance is 9.08%.

Conclusion:
Block transactions dominate the bourse amidst subdued retail participation
The market witnessed a lackluster performance during the week with activities being largely driven by institutional and foreign investors, via crossings whilst retail participation remained relatively subdued. The continuous dip in the market over the past few weeks could be partly attributable to investors shifting towards the listed debt instruments which yield relatively attractive tax free returns. Blue chip counters such as John Keells Holdings, Commercial Bank, Distilleries and Ceylon Tobacco Company dominated the week’s turnover on the back of crossing trades executed on those counters amidst price dips witnessed in majority of the large cap counters. A notable trade of over 10mn shares on John Keells Holdings was witnessed between foreign parties on Thursday which pushed the day’s turnover to be over LKR3bn, whilst institutional interest too continued to be sustained on the counter. Moreover, the rupee has been depreciating over the week which could be partly explained by a surge in the gold imports (USD 100mn so far for 2013 compared to USD 150mn during 2012), whilst the foreign loans of the banking sector that are maturing during this month also would have created pressure on the rupee to fall.

Meanwhile, the data released by the Department of Census and Statistics showed that the economic growth of the country for 1Q2013 slowed down to 6% YoY from 8% YoY in 1Q2012. While this growth can be largely attributed to the investments made in the construction sector which expanded 18.2% YoY, the slowed down in the Agriculture sector which grew merely by 2% YoY as opposed to 12% YoY last year primarily contracted the growth rate. Service sector grew at 4.3% YoY down from 5.8% YoY and the Industrial sector grew at 10.7% YoY, remaining virtually flat from a 10.8% YoY growth witnessed during 1Q2012. Further, the export earnings for the period dipped 1.9% YoY, however the imports fell at a faster pace of 10.5% YoY. However, we expect the growth to recover from 2H2013 subsequent to the easing of monetary policy by the CB in May 2013. Moving in tandem corporate earnings are likely to witness an improvement, however the sharp increase in energy costs in April 2013 is likely to dampen the performance of energy intensive companies which are unable to pass on the cost increase to the end customers in the short term.
Source: Asia Wealth Management Research 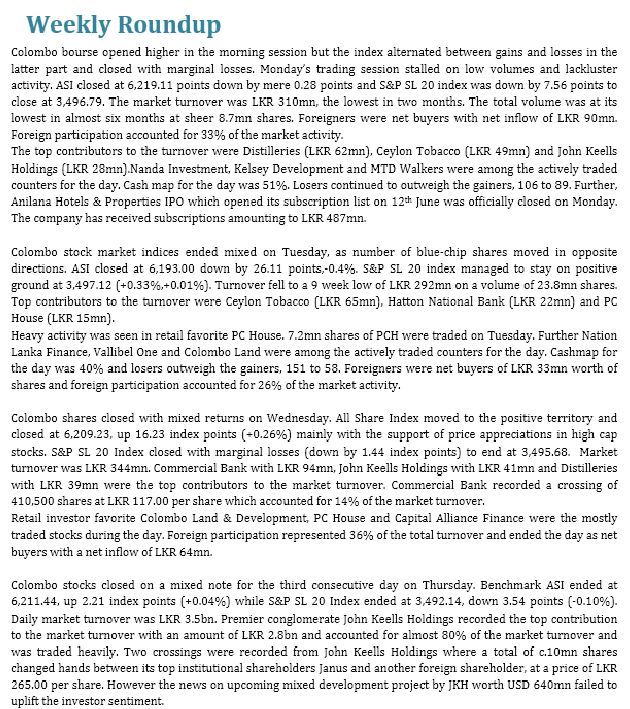 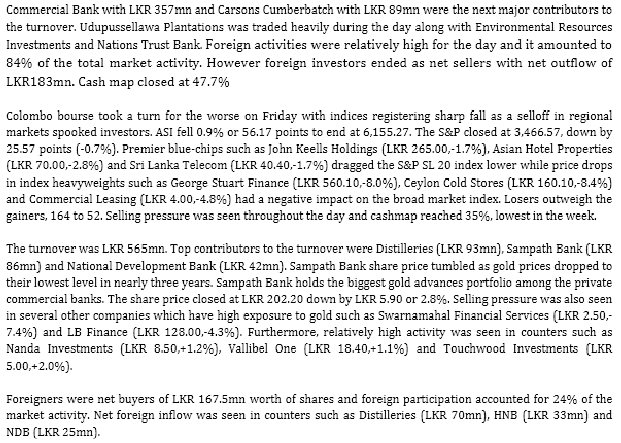 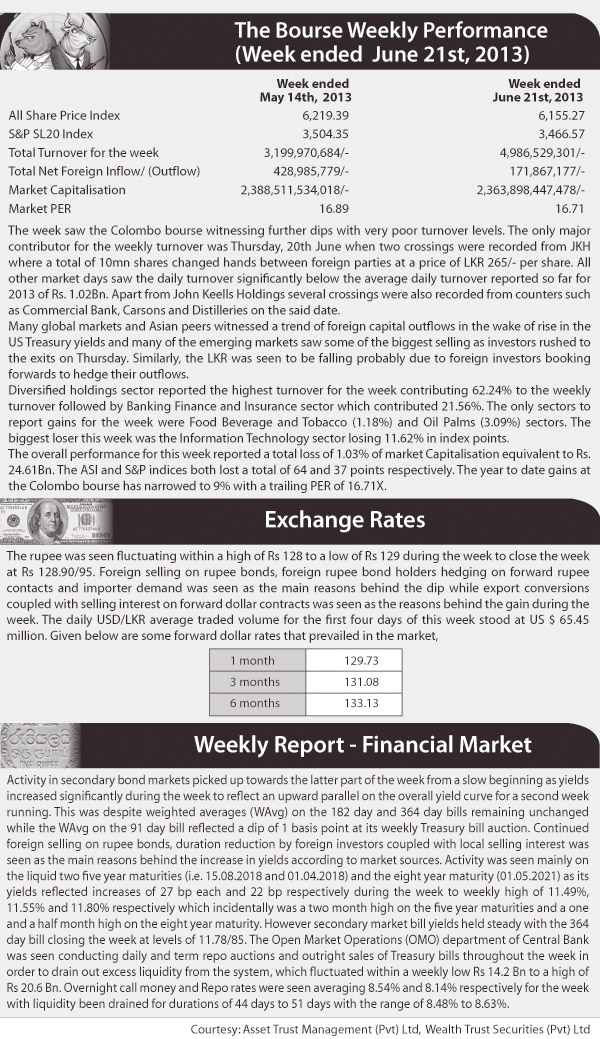 Re: The Bourse weekly performance